Religion enters the campaign for the Republican primary in America. 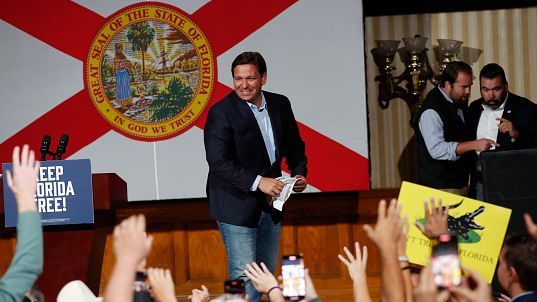 It is common to hear the phrase “everything is political” to justify the behavior and consequences of the concentration of power in the capital of the United States. But in this country, where primary elections are already looming ahead of the 2024 presidential election, even religion is beginning to play a decisive role, Something that the candidates of both the parties are aware of, who have been launching siren songs at their respective bases for a long time to garner votes.

especially in the republican partyin which His voters will decide the representative in the battle for the White Housein less than a year. For now, they only have one official candidate for it, former Pres. Donald Trump, While it awaits the governor of Florida, Ron DeSantisAlso declare your candidature.

Trump: “This won’t be my campaign. It will be our campaign together. Because the only force to defeat the rampant corruption we are up against is you, the American people.” pic.twitter.com/ShFBEywaTb

And he will do so emboldened by the support he has received from some groups, especially those made up of Hispanic evangelicals, who in Florida have already swung their votes for him in opposition to Trump, whom they chose during the last election. an endorsement, which applies to the rest of the country, could be decisive, since the United States about five million adults are Latino Evangelicals, what They are part of a total of 14% of white evangelicals.According to the Public Religious Research Institute (PRRI).

In fact, white evangelical Protestants have been one of the groups most loyal to the Republican Party over the years, as shown by the support they receive in polls. 2020when 8 out of 10 voters – especially those who regularly attend religious services – chose TrumpAs collected by Pew Research in its surveys.

But Trump’s poor results in past midterm elections raise questions about the support he receives in his party’s primaries to be the Republican nominee for the White House. proof is desantisDespite not yet being officially presented, has managed to establish itself as Favorite for a significant portion of the electorate,

To that end, he has worked, in recent years, to reach out to these religious groups, especially evangelical and Catholic Latinos, using a combative argument that mixes culture warfare against Democrats and moral pronouncements. These are based on the fight against abortion, the defense of the traditional family, the maintenance of gender roles, and the use of biblical language more similar to that used by church clergy than that used by politicians in an election campaign.

The result prompted DeSantis to lead the polls ahead of Trump (52% to 38%) are facing an imaginary contest among Republican voters, a recent Wall Street Journal poll showed.

Although the former president began reaching out to these religious groups before his opponent (81% of white campaigners voted for him in 2016), even promoting it in 2020 with the formation of an “Evangelicals for Trump” group, a growing portion of them drawing on the current governor of Florida.

Some of the reason may be the anti-immigrant message the tycoon introduced during his last campaign, but there’s also Fear of losing the presidential election if Trump wins the primary, In this sense, several prominent evangelical pastors recently announced to Vanity Fair their desire that the former president drop out. “The bottom line is simple: Donald Trump has to go,” said Everett Piper, a former president of an evangelical university, who went even further by declaring on behalf of his group: “If Trump is our candidate in 2024, we will be ” The destroyed.”