Renovation of the artificial turf of the football fields of Garbinete, Tombola and La Siguena for 1.2 million 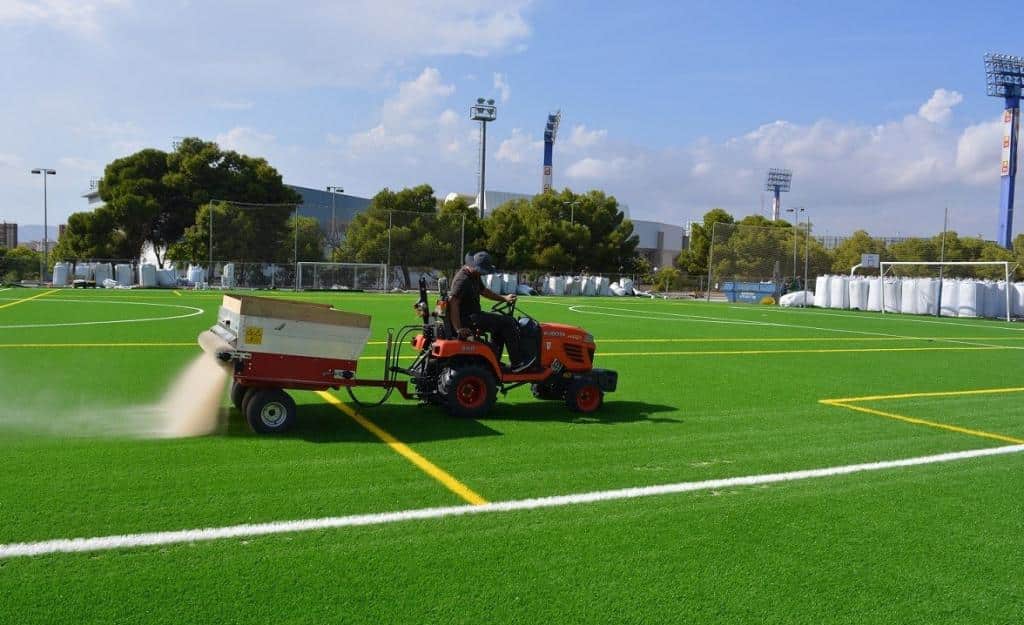 The Contracting Board of the Alicante City Council has approved an assortment of companies with the proposal presented by the company Realturf Systems SL for the renewal of artificial turf and the improvement of the municipal football fields of Garbinete, Tombola and La Siguena. Best placed among five competitors with an offer of 1,223,026.87 euros.

The selected company has submitted offers for three lots of EUR 372,276.22, EUR 339,801.48 and EUR 510,949.17 respectively, amounting to EUR 1,223,026.87. The action is part of a plan to improve and modernize sports facilities in Alicante and adds to the three municipal soccer fields in Ciudad Deportiva Antonio Solana, San Blas and Florida Babel that have already been renovated.

The action is coordinated by the Department of Sports and Infrastructure, directed by councilors José Luis Berenguer and José Ramón González, respectively, with the aim of renovating sports facilities and meeting the requests of users, especially youth football clubs. . ,

The works include the renovation of the irrigation network, the replacement of artificial grass, as well as changes to its endowments such as: goals, benches, nets and furniture and the adaptation of transit areas.

The councilors of Sports and Infrastructure highlighted the great effort that this government team is making with “nearly ten million euros to modernize and update the city’s sports infrastructure, such as those that are now being launched, facilities that are used by thousands of sportspersons, with the aim of maintaining and guaranteeing quality sports centers and venues in good condition”.

This important new investment of more than one million euros is added to the investments already made, within the municipal plan with the remodeling of the soccer fields located in the Albuferita Sports Center, the ‘Luis Gómez’ and ‘Juan Antonio’ ​​in Virgen del Remedio. In addition to recent appearances at facilities in Gran Via Sur, Antonio Solana, San Blas and Florida-Babel Sports City in Samaranch.

The works on the soccer fields each have an execution period of two months, and with them it will be achieved, as explained by councilors José Luis Berenguer and José Ramón González, “the installation of approximately thirty thousand square meters of artificial turf pavement.” three new football fields in the city’s neighborhood sports complexes to replace that”.

Adaptations and improvements to the municipal football field ‘La Siguena’

The city council promotes a new project with the most investment of the three, for its total renovation, in the municipal football field ‘La Siguena’, located on Calle Deportista Joaquín Blume, with a tender budget of 528,729 euros.

With the works, a series of measures to improve the facilities of the sports venue are defined and implemented, in addition to the renovation of the playing field. In order to guarantee optimal playing conditions, the works contemplated in the project include the replacement of artificial turf.

The Sports Councilor announced that these works “consider the expansion of the playing space, with the aim of complying with the minimum dimensions established by the Spanish Rugby Federation for future homologation of the field in accordance with regulatory requirements.”

Also, renovation of sports equipment, goals, benches, nets, stands, renovation of irrigation equipment of the football field, mainly irrigation cannons as well as drainage channels around the field and finally, the beautification work of the sports venue. and repair and adaptation of a variety of elements to improve functional conditions.

Tombola works on the football field of the Municipal Sports Center, the bidder has a budget of 359,401.45 Euros for the execution of the work required to replace the playing field located on Penaguila Street.

In these facilities, the land is changed and the facilities of the sports venue are improved. The work contemplated is the replacement of the grass, without modifying the dimensions of the playing field and its outer bands, in order to guarantee optimal conditions and new playing equipment, as well as the renewal of the irrigation equipment with new cannons. ,

The tender was put out for 388,617 euros to adapt and improve the football field at the Garbanate Municipal Sports Center, and the Garbanate Municipal Sports Center, located on Calle Deportista Navarro Olsina, has been refurbished with an extensive renovation, lawns, facilities, and equipment. and indoor sports equipment, as well as existing accessories, mainly sprinkler devices on the playground, installing new pop-up irrigation cannons, in addition to the restoration of damaged areas on the paved surface around the playground and perimeter railings.