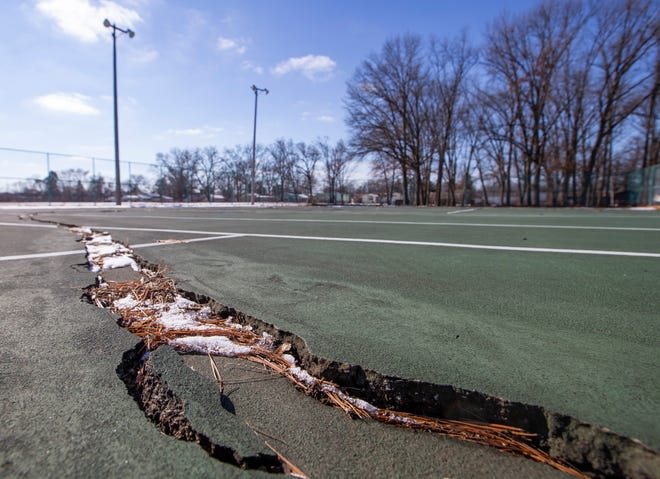 SOUTH BEND – A new series of renovations to repair damage to athletic courts at parks across South Bend is also giving the city a chance to capitalize on one of the fastest growing sports in America – pickleball.

The project, costing about $1.5 million, consists of repairing 50 athletic courts at 12 parks in the city. Tennis courts at most of those locations are being restriped to double as pickleball courts, while eight stand-alone pickleball courts will be installed at Boehm Park, as the city looks to go “all-in” on the growing sport.

“Pickleball, year after year in recent history, has been one of the fastest growing sports in the country,” said Venues Parks and Arts executive director Aaron Perri. “We want to make sure we’re keeping up with that trend. We’ve temporarily striped some of our courts to scratch the pickleball itch, but we’re going all in with the Boehm facility.”

More:Pickleball is on its way to Central Park in Mishawaka

The courts, which are mostly asphalt surfaces, get damaged the same way roads do, with rain water seeing in, then freezing and thawing.

“It’s not uncommon for people to understand how potholes form in the streets. That’s very similar to what happens in our asphalt athletic courts,” Perri said. “We can only patch those so many times before they need to be replaced.”

Some of the courts, like the one at Keller Park, are damaged to the point of them being unsafe to play on and were closed last year, Perri said.

The vast majority of the money for the project will come from American Rescue Plan funds, with around $102,000 coming from the parks department’s budget.

Construction will start in the spring and will be completed over the summer.

All told, South Bend will have 19 more pickleball courts once construction is completed this summer.

When Nick Falletta, president of the Michiana Pickleball Club, first heard the parks department’s full plan for adding pickleball courts, he was shocked.

“I about fell out of my chair. I never expected that,” he said. “We work with other parks and rec and townships in the area and nobody’s basically dug in like that.”

Eight years ago, when he first picked up pickleball, Falletta often had to wait in line before getting in a game at crowded courts in Granger. Now, pickleball enthusiasts in the area have a variety of places to play with South Bend’s renovations coming on the heels of new courts at Mishawaka’s Central Park and Twin Branch Park.

Long cracks running parallel slice across the center of the courts at Boehm Park currently, but once repairs are made, the park’s location and eight new pickleball courts, could soon attract players from all over Michiana, especially for tournaments.

“I think Boehm is going to be the first to get a big following,” Falletta said. “Their plan is to be the premier place for pickleball in and around the area.”

Pickleball – which plays like a combination of tennis and ping-pong – perfectly walks the line of being involved enough for younger players, but not too physically demanding for older ones.

Fueled largely by Baby Boomers, 4.2 million Americans play pickleball annually, with some studies calling it the fastest growing sport in the country. And as more people get into it, the friends they make while playing only increases the ripple effect, Falletta said.

“It’s a very, very social game. I’ve met more people playing pickleball in those eight years than I have in my entire life,” Falletta said, noting the Michiana Pickleball Club now has over 360 members.

Colorado continued to build homes during the pandemic last year, but where they were built has changed