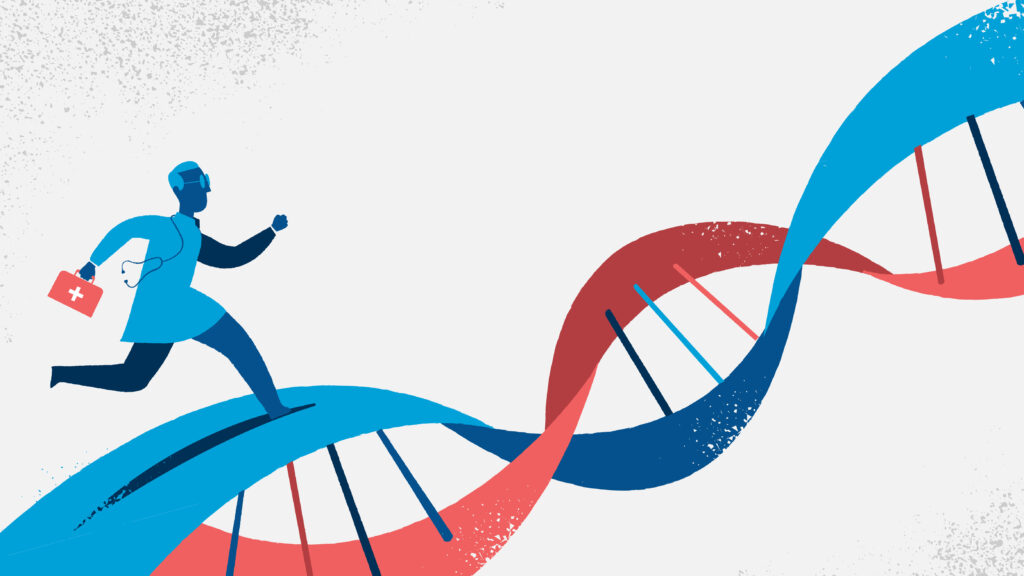 aA year earlier, Matthew Kunzman’s heart was failing, despite the doctors’ best efforts to bolster it with every pump and gadget they could think of. But the 14-year-old has made a comeback, in large part because of super-speedy genetic sequencing, which pinpointed the cause of his illness and helped doctors decide how best to treat it — in just 11-and-a-half hours.

This quick diagnosis – faster than any other medical team has previously reported – resulted in a new approach to DNA sequencing to help patients with fatal and rare diseases. On Wednesday, a team of Stanford researchers and colleagues published a paper in the New England Journal of Medicine reporting that they had sequenced 12 critically ill patients and successfully diagnosed five of them (including Matthews). . In all five cases, the information led to tangible changes in the way patients were treated.

Typical turnaround times for diagnosis were about eight hours and as short as seven hours and eighteen minutes – less than half the current record. And scientists are convinced they can halve it again. According to Euan Ashley, a Stanford cardiologist and senior author of the study, such a pace could be life-saving for critically ill patients.

“You can not only make care better, and help patients more, but you can make it cheaper, save money, save the system money,” Ashley said. “It feels like a win, win, win all-around.”

A lot can be learned from exploring your genetic code, which affects everything from your height and eye color to your chances of developing certain diseases. For doctors, knowing whether a patient’s symptoms are associated with specific DNA mutations — and, if so, which ones — can help them determine which treatments and surgical procedures to try and which ones. Have to avoid.

But it usually takes weeks to run, process and interpret the sequencing results. Some patients do not have that time. And the hospitalization spent chasing down the cause of an unknown disease can cost tens of thousands of dollars.

Ashley wanted to see how quickly he could speed things up. He and his team enrolled a dozen critically ill patients admitted to Stanford, from each of whom about half a teaspoon of blood was taken for genetic sequencing. The participants, who ranged in age from 3 months to 57 years, suffered everything from seizures to cardiac arrest.

During the six-month study, which began in December 2020, researchers tweaked nearly every step of the sequencing process, from running samples from one’s hospital to the lab to reduce the time needed to prepare DNA for sequencing. for.

It was a round the clock job. Ashley remembers walking into her lab one morning and seeing the sleeping bag of a lab member who stayed overnight to run samples.

One of the main time savers was that the team was simultaneously sequencing 48 DNA samples from a single patient, allowing the researchers to generate 200 gigabases of data in under two hours. To do this, they relied on the Oxford Nanopore’s sequencing technology, which can read thousands of DNA letters at a time, rather than sequencing tiny bits and stitching those tiny pieces back together into a whole genome, which is currently the case. is the main method.

“It’s really starting to show off the Oxford platform in a clinical setting,” said Sean Baker, a sequencing consultant with more than 20 years of genomics experience, including research at sequencing-industry giant Illumina. and 12 years tenure with Product Marketing Divisions. “And that’s exactly what has been missing until very recently.”

But all that data left the researchers with a new challenge — processing it quickly. He turned to cloud computing to analyze the raw sequencing data and spit out a recognizable string of A’s, T’s, G’s and C’s. They then used computing tools to scan those sequences for mutations in genes that might explain the patient’s symptoms, returning a list of about 20 to 30 candidate genes for a three-person team of genetics experts to review. Huh. All told, it typically took about eight hours to go from blood draw to diagnosis.

The Kunzman family first experienced that process in January 2021. Initially, Matthew felt weakness and shortness of breath and had a fever of around 102 degrees Fahrenheit. His parents thought he might have had COVID-19 or the flu, but chest X-rays and additional tests showed that not only was his heart enlarged, it was failing.

“It was terrifying,” said his father, Matthew Kunzman, Sr., “I served in Iraq. And this level of stress when your child’s life is at stake is unlike anything I’ve experienced overseas. is worse than that.”

With Genome Sequencing, Some Sick Babies Are Getting Healthy

Matthew was airlifted from Oregon to Stanford, where his condition first deteriorated. But his parents agreed to ask the researchers to test Matthew’s blood. They were told that if their heart problems were caused by myocarditis, they might have medications to help reverse the condition. But if the problem was genetic, it would require a heart transplant.

Researchers learned Matthew’s issues were genetic, and he was quickly placed on the list for a transplant he received in March. Now he says he has mostly recovered—even if he hasn’t returned to the nine-mile hike he used to do with his family. Meanwhile, his parents want their three older brothers to be tested to see if they have the same mutation.

Other medical systems have reported similar success stories in the past, namely the Ready Children’s Genomics Institute in San Diego, which has sequenced thousands of sick infants from nearly 80 hospitals in North America. The institute held the previous record for diagnosis time of about 14 hours, although President and CEO Stephen Kingsmore was happy to hear that it had been broken.

“Happy congratulations,” he said. “We’re going to be hot on their heels.”

Confessions of a ‘Human Guinea Pig’: Why I’m Resigning from Moderna Vaccine Trials

Kingsmore points out that the sequencing and data processing cost reported in the new study, which ranges from about $5,000 to $7,300 per sample, is higher than Ready’s approach, which uses Illumina technology. And he says he would have liked to test the accuracy of his method by running a sample with a sequence already known to the authors, a standard way of determining error rates.

Going forward, the Stanford team is working on reducing the total amount of sequencing data it needs to collect, which will further speed up the process. And the plan is to offer rapid whole-genome sequencing to more Stanford ICU patients soon, with a diagnosis being delivered in less than 10 hours.

But while this may be good news for Stanford patients, Ashley recognizes that many patients and families do not have access to a state-of-the-art medical center, and that these technologies are not cheap. He said studies at Reedy and other locations show that health care savings from whole genome sequencing outweigh its costs, despite insurers moving too slowly to cover genetic sequencing. Along similar lines, a UK study published in the New England Journal of Medicine in November found that many rare diseases seen by whole-genome sequencing would otherwise have gone undetected with standard, narrow-minded genetic tests.

“I would love to see that we have moved on from the moment where we are still sitting on the phone and justify (to) every single test where the test is ordered like other tests we have known for years , are both cost-effective and cost-effective,” Ashley said. “I am really looking forward to it.”

The Sims: The health unit got the memo on lowering the odds for shots, but GO-Vaxx hasn’t

Rahul, a 9-year-old rapist, met the family of the murder victim and said, “I will be by their side until justice is done.”