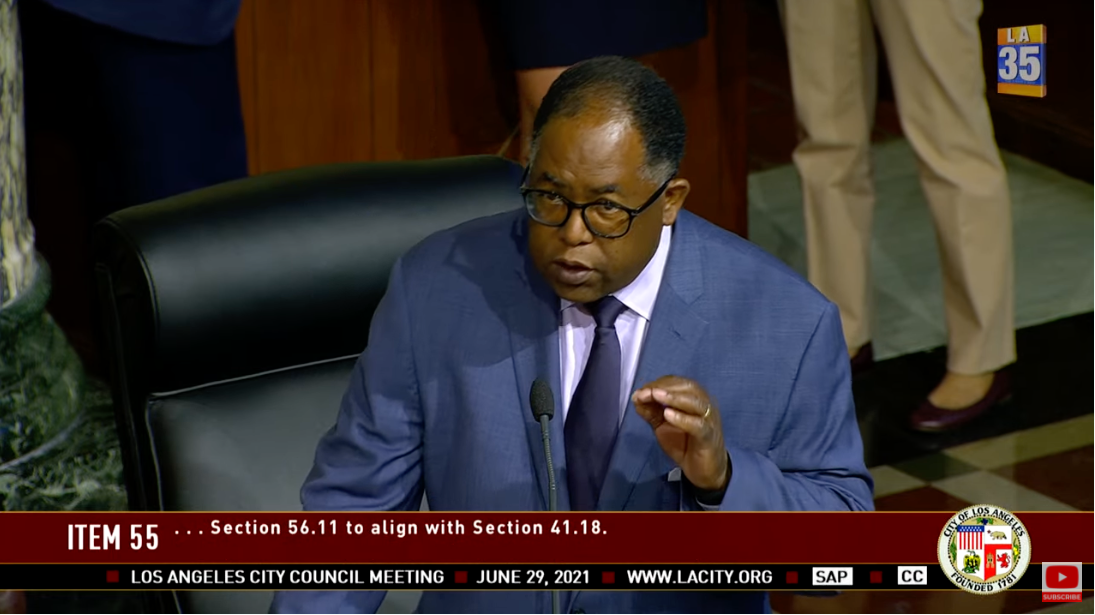 A group of Los Angeles City Councilor Mark Ridley-Thomas neighborhood residents lashed out at the city’s political leaders on Monday, saying they still lacked a voting representative as a plan for redeployment of counties is being prepared to vote.

The group, which gathered outside the South Missionary Baptist Church on West Adams Boulevard, said they need someone to defend their interests when councilors adopt a neighborhood redistribution plan that is expected to set the city’s political boundaries for the next decade.

Ridley-Thomas was removed from office last month after being accused of federal bribery and conspiracy. The council is scheduled to vote on the proposed card on Tuesday, followed by two public hearings and another vote on December 1.

Participants in Monday’s press conference summoned council members who voted for removal, chanting “shame on you” after everyone’s name was read aloud.

“We think they stole our voice,” said Diane Robertson, a resident of Leimert Park.

Prosecutors alleged that Ridley-Thomas colluded with the dean of USC to send district money to the university in exchange for accepting his son Sebastian to graduate school with a full-time scholarship and paid professorship. The councilor pleaded not guilty and, through his lawyer, denied that he had abused his position at any stage in his political career.

Days after he was indicted, Ridley-Thomas sent the board a letter stating that he intended to refrain from attending board and committee meetings so as not to distract attention. The Council acknowledged receipt of this letter when it voted to remove him from office by 11 votes to 3.

Robertson said she believed that following the vote, some council members attempted to “seize power” in the Ridley Thomas area. In one of the district redistribution proposals drawn up last week, councilor Jill Zedillo asked to move part of the Harvard Heights district from 10th Ridley Thomas to his.

Council President Nuri Martinez said none of these changes received support from the ad hoc committee on redistribution of districts, which sent its proposed map to the council last week.

Instead, Martinez said, all changes made by the committee to the 10th district were requested by the Ridley-Thomas office, which is currently chaired by newly appointed district superintendent Carly Katona.

Harry McElroy, the head of the district who lives in Leimert Park, warned that Zedillo and Crecorian’s proposals could still be revived. Katona, who spent much of last year as chief of staff for Ridley-Thomas, is set to get a vote at City Hall, he said.

“She runs trains anyway,” said McElroy, who is affiliated with the Hepburn Avenue Homeowners Association. “So it seems logical to me that if you’re going to put a caretaker … he should have a say.”

When asked about the selection of an interim board member, Martinez spokeswoman Sophie Gilchrist said the board president “is still considering all options.”

Catona declined to comment for The Times. However, on Monday she sent a letter to the council, in which she expressed her disagreement with the proposals of Zedillo and Krekorian on the redistribution of the territory.

The proposed neighborhood redistribution map was prepared by Martinez’s seven-member committee on Friday after weeks of citywide debate. According to the map, the biggest changes will occur in the Hollywood Hills area of ​​councilor Nitya Raman, who will lose areas such as Hancock Park, La Brea Park and Miracle Mile.

In return, the Ramana area will receive new parts of Encino, Reseda and Studio City in the San Fernando Valley.

In discussions on Tuesday, the council is also expected to decide which neighborhood will represent USC and the adjacent exhibition park in South Los Angeles.

City Councilor Marquis Harris-Dawson had previously called for the return of both to his district after a 10-year absence. The Martinez committee did not support such a move, recommending that both remain in the neighborhood of councilor Curren Price.