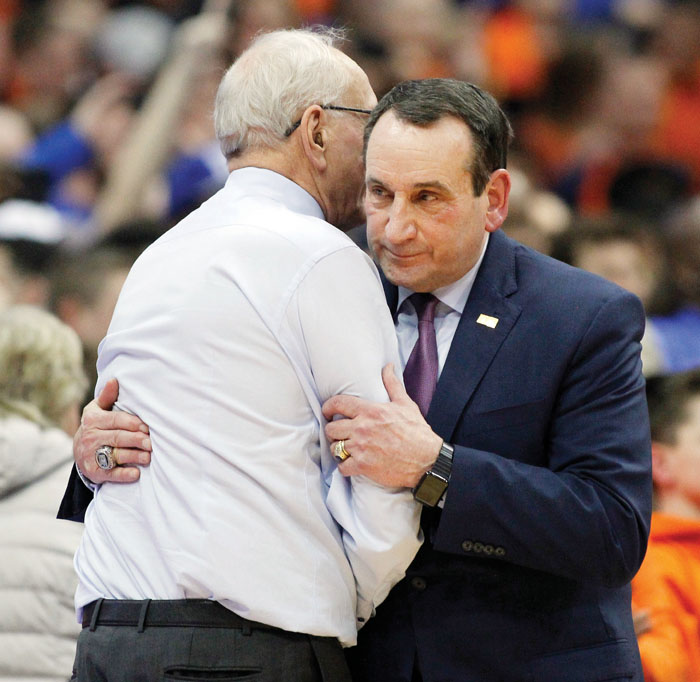 Mike Krzyzewski’s unparalleled coaching career is down to a few basketball games, with no more than a month left before the retiring Duke Hall of Famer walks off the sideline for the last time.

His influence on the sport will remain long past that final farewell. The fingerprints of the man known simply as “Coach K” are all over the highest levels of the game as he winds down his nearly five-decade head-coaching career.

Nearly two dozen of his former players are currently on NBA rosters. Another dozen or so are coaching or working for NBA teams. There are others who lead their own Division I college programs. And some of the NBA’s biggest stars of the past two decades have won Olympic gold medals under his direction.

“He’s got a small army of people that are working in basketball that believe in his values ​​and things that he felt were important,” said Arizona State coach Bobby Hurley, the point guard on Krzyzewski’s first two NCAA championship teams in 1991 and 1992. “ That’s regardless of whether you coached with him or if you were a player, because they’ll have such incredible experiences and memories of things that he did that you still use in your own situations.

“His legacy is going to continue to grow through others that he’s had an impact on in their lives, and I’m definitely one of those people.”

The 75-year-old Krzyzewski coaches his final home game at Cameron Indoor Stadium on Saturday, fittingly against rival North Carolina. At most, he has 10 games left in a career that began with five seasons at Army followed by 42 at Duke, assuming the Blue Devils reach both next week’s Atlantic Coast Conference Tournament final in New York and the NCAA championship game in New Orleans on April 4.

Regardless of when or how the end comes, Krzyzewski’s place is unquestioned among the greatest coaches in the history of American sports.

He has a 1,196 career victories, more than any coach in men’s or women’s college history. His five NCAA titles rank second to late UCLA great John Wooden on the men’s side, while his resume includes a record-tying 12 Final Fours and a record 127 weeks with teams ranked at No. 1 in The Associated Press men’s college basketball poll.

“He’s the best that’s ever done that in the modern basketball world,” Syracuse coach Jim Boeheim said. “John Wooden won 10 championships, you can never say anything but that. But it’s a different world today. There have been a lot of great coaches – there’s nobody close to what Mike has done.

“He has given everything to the game and helped make the game what it is today without any question.”

The numbers back up Boeheim’s conviction.

Krzyzewski had 21 players as of February on NBA rosters — including current or former All-Stars Jayson Tatum, Kyrie Irving, Zion Williamson and Brandon Ingram – and an ACC-record 27 players last season.

Duke notes that Krzyzewski has coached 113 NBA players between the school and USA Basketball, where Krzyzewski partnered with former managing director Jerry Colangelo to restructure the men’s national team program. The result: he managed egos and meshed star talent like LeBron James and the late Kobe Bryant to thrice produce Olympic gold.

Some former Krzyzewski players are now in NBA leadership positions, such as Quin Snyder as head coach of the Utah Jazz, Brand as the general manager of the Philadelphia 76ers, Trajan Langdon as GM of the New Orleans Pelicans, and Grant Hill as co-owner of the Atlanta Hawks.

The same is true in college, with Krzyzewski’s tree spawning 10 former players or staffers as head coaches – a number that will grow next season when Jon Scheyer moves over one seat on Duke’s bench as Krzyzewski’s designated successor.

For all, Krzyzewski’s lessons linger.

“I always tell people that I’ve never been around someone more dedicated to the game of basketball,” Allen said, adding: “He’s fully committed to every little detail.”

“He still wakes up wanting to fight somebody and beat somebody,” Brey said.

As for Hurley, he has a greater appreciation for Krzyzewski’s decade-after-decade run of sustained success after nine seasons as a head coach at Buffalo and Arizona State. He recalled a vivid memory: the end of the classic 1992 NCAA regional final against Kentucky, right before Duke won on Hill’s fullcourt pass to Christian Laettner for a buzzer-beating turnaround.

“I’ve seen him be so poised at some of the darkest moments where people would lose hope,” Hurley said. “Like our Kentucky game and just how he handled that huddle. You just look back now that you’re a coach and you say, ‘Wow, could I have been that poised? Could I have convinced this group that we were going to win this game?’ ,

It was one of many memorable wins for Krzyzewski, though his impact on the game extends beyond victories.

With retiring Hall of Fame coach Mike Krzyzewski down to his final few games at Duke, here’s a look at his impact on the game, from college basketball coaches, to the NBA and international competition:

That list doesn’t include former assistant Mike Brey, who is in his 22nd season as Notre Dame’s head coach, or former Duke director of basketball operations Mike Schrage, in his third season at Elon.

In all, 68 of Krzyzewski’s players at Duke have gone on to become NBA draft picks, including record totals of 42 first-round draft picks and 28 going in the lottery.

There are 21 former Krzyzewski players as of February on NBA rosters — including current or former All-Stars Irving, Williamson, Jayson Tatum and Brandon Ingram – and an ACC-record 27 players last season.

Utah Jazz head coach Quin Snyder; Elton Brand as the general manager of the Philadelphia 76ers; Trajan Langdon as GM of the New Orleans Pelicans; Grant Hill as co-owner of the Atlanta Hawks; Mike Dunleavy Jr. as vice president of basketball operations for the Golden State Warriors; David Henderson as a scout for the Cleveland Cavaliers; and Martynas Pocius as an assistant director of pro personnel for the Denver Nuggets.

Duke notes that Krzyzewski has coached 113 NBA players between his time at the school and his tenure with USA Basketball.