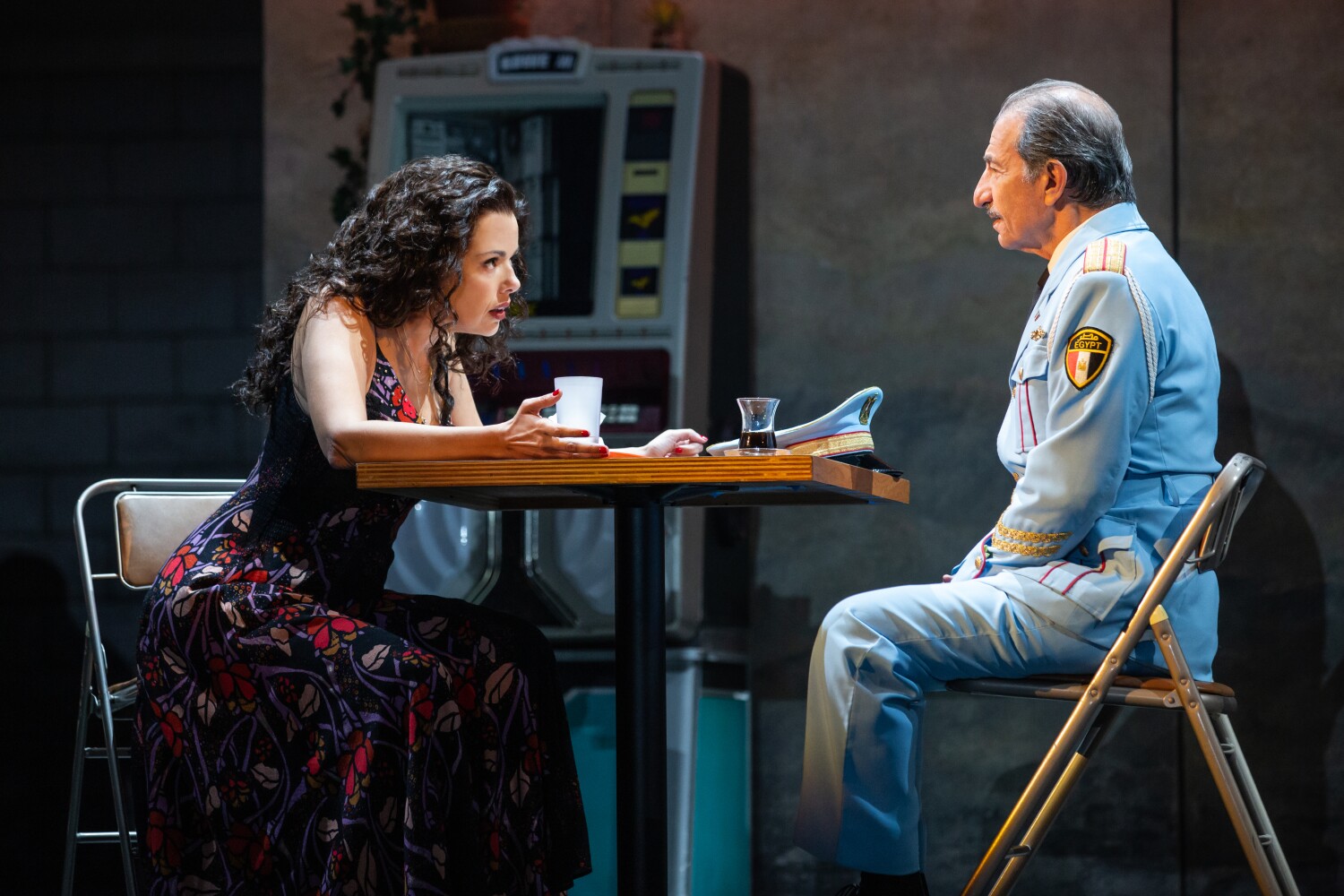 A musical doesn’t have to make a lot of noise to be mesmerizing. The Band’s Visit, the exquisitely gentle Tony Award-winning show currently premiering in Los Angeles at the Dolby Theater, walks effortlessly across the stage in the silence of the magic.

Based on a screenplay by Israeli screenwriter and director Eran Kolirin for his 2007 film of the same name, Orchestra Visit follows a group of Egyptian musicians stranded overnight in a sleepy, deserted town in Israel. Strangers in a suspicious country, they don’t expect to be accepted. But instead of enmity, they find hospitality – their differences are eliminated first by politeness, and then, when they get to know each other better, by gloomy humanity.

Composer and lyricist David Yazbek fills the book of Itamar Moses with lyric verses. Restrained, not decorated, music is a means of expressing grief, longing and hope – a universal language that knows no boundaries.

Cutting-edge Dolby, which runs until December 19, is the perfect setting for a show that relies on quiet clarity. The theater experience is refreshingly laid back. Spacious enough to comfortably accommodate a crowd, Dolby creates a sense of intimacy even from a distance with the clarity of the sound system and the brightness of the lighting.

And intimacy is important for The Band’s Visit, a musical that easily but deeply penetrates Chekhov’s territory. The tone is playful, almost casual. But some essential truth about life is caught in the carefree stream.

The scene unfolds amusingly in several sentences projected onto the stage at the beginning of the performance: “Not so long ago, a group of musicians came to Israel from Egypt. You probably haven’t heard of this. It wasn’t very important. ”

However, we celebrate most of our days with insignificance. And what doesn’t make the headlines matters a lot.

The Ceremonial Police Band of Alexandria, which was invited to perform at the Arab Cultural Center in Petah Tikva, went off course due to a pronunciation error. The group finds themselves in Beth Hatikwa, a fictional backwater that locals describe as “boring,” “barren,” and “tasteless” in a crooked piece of Welcome to Nowhere.

Dinah (Janet Dakal), the owner of the café, greets this male troupe with harsh bewilderment. Tevfik (Sasson Gabay, reprising the role he played in the film), the orchestra commander, flawlessly asks if he and his musicians can dine at her establishment. She agrees with a shrug of the businesswoman.

Formalities are out of place in Bet Hatikva. “Pick the sandstone of your choice,” jokes Papi (Koby Getzug), one of the friendliest locals. But Dinu is drawn to Tevfik’s gravity and thinks he looks cute in his navy sergeant. Pepper’s Lonely Hearts Club Band suit. She offers to find sleeping places for the musicians after reporting that there are no more buses today.

The city does not want to open its doors, but Dina turns out to be as formidable as Tevfik. She divides the men into parts, taking Tevfik and Khaled (Joe Joseph), a young romantic trumpeter obsessed with Chet Baker, to her place.

Khaled has cause for concern. It was an innocent misunderstanding of his that got the band on the wrong bus. Tevfik loudly declared his impatience for the dreamy Khaled. However, Khaled is like a puppy who can’t stop chasing fun even after being hit by a newspaper.

As in Chekhov’s play, an intense plot is not needed for the revelations to appear. Orchestra Visit is based on the alchemy of unexpected encounters. Dinah and Tevfik, ships in the night that shouldn’t be in the same waters, discover a shared love for the old Egyptian films, which Dinah sings about in a beautiful ode called Omar Sharif.

The heroes glimpse into each other’s souls. Music ahead, turning commonplace conversations into something sublime. In one of the most touching incidents of this eminence, Simon (James Rana), a clarinetist and aspiring conductor who lives with husband and wife (played by Clay Singer and Kendal Hartse) in the throes of marital troubles, calms his crying child with some sounds from his instrument. …

Peace comes to this stormy house, and suddenly all the accumulated grievances cease to seem so important. Simon was unable to finish the concert, which he began writing long ago, but his art did its job of relieving daily suffering.

The unspoken hovers between Dina Dakala and Tevfik Gabay as they drink in the evening air. Love melancholy fills in the blanks in what they say.

Joseph’s “Khaled” radiates sensual pleasure that becomes most precious because of his realization that his days of youthful freedom are coming to an end. An eclectic mix of musical styles – including traditional Arabic, klezmer and jazz – enhances the actors’ subtle emotional chemistry.

David Cromer’s smoothly controlled production moves smoothly from cafe to home to roller skating disco, all the while keeping an eye on the phone booth where a lonely guy (Joshua Grosso) is always waiting for a call from his girlfriend that never seems to come.

The scenic design by Scott Pask is as hilarious as the show itself. The settings are sketched out with a simplicity that looks more like a diagram than a photograph. However, the moonlit atmosphere lends a haunting personality to the rest of the place.

At a time when everyone seems so angry, conflicts seem insoluble, and communication is no longer achievable, “The Band’s Visit” is like balm for a tired spirit. The musical touched me deeply when I saw it on Broadway in 2017, but after such a long hiatus from theatrical life, the performance made an even greater impression on me.

The musical drama of Yazbek and Moses, working on a subtler than usual Broadway frequency, invites us to overcome our differences. I didn’t realize how much I needed The Band’s Visit, but this show-gift arrived just in time.