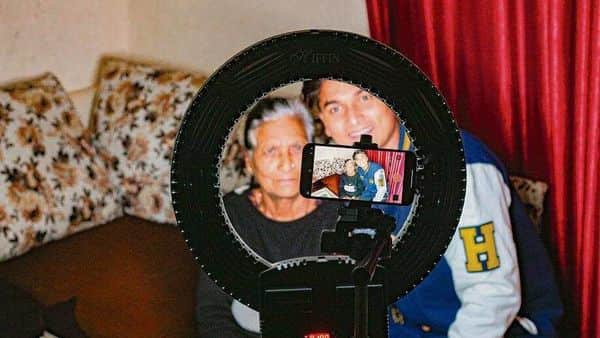 A ring light is essentially a ring-shaped fluorescent light bulb or several small LED lights to form a circle on a stand. It is placed behind the camera to provide uniform lighting, making the object in front appear sharp and bright. For members of the producer economy, it’s probably the best thing since sliced ​​bread. “If I were to rank production tools in order of necessity, I’d say Ring Light is at the top,” says Nike, who currently has over 1.3 million followers on Instagram. “I need it as much as I need the camera. Shoot video,” she continued.

With new users joining the Creatorverse during the pandemic, there has been an increase in online and offline demand for these lights. A company spokesperson said that Amazon India saw an increase in Ring Light sales in 2020, which grew by almost 50% in 2021. On Flipkart, the demand for Flash Ring Lights has more than doubled in 2021 as compared to the previous year.

Rakesh Krishnan says, “While tripods and mics were already widely used, Ring Lights gained more popularity among creators in the post-pandemic times as an easy, affordable solution for vlogging from home , where it was difficult for many to build a professional studio setup.” , Flipkart Senior Director, Electronics. Flipkart also saw a rise in demand for the cheaper and smaller variant, mobile ring lights, during this period.

Over the past five years, interest in the search term “ring light” saw a sharp increase on Google Trends India for the first time in the last week of March 2020, coinciding with the earlier pandemic-led lockdown. Interest reached its highest level. A year later, in the second week of May 2021.

In fact, in the major centers of electronic goods in metros, ring lights have become the most distinctive item on display. For example, you will find them at electronic goods shops in Nehru Place, Chandni Chowk, Lajpat Rai Market and Palika Bazar in Delhi. They are hard to miss as you walk through the shops on both sides of the lanes leading to the busiest local train stations in Mumbai’s Andheri, Borivali, Bandra and Mira Road. Various types of ring lights are available at electronics centers in SP Road area of ​​Bangalore and Irla and Crawford market in Mumbai.

While Ring Lights are available at different price points, starting with 500 going up 10,000, some high-end ring lights that come with multiple attachments cost . can happen till 40,000 also. The price depends on the length of the tripod, camera/mobile mount, add-on filters, among other things. Traditionally, ring lights were used in specific areas. Technology creator Abhimanyu Thakur (@technomanyu), who has 140,000 followers on Instagram, says, “Like dentists use them to take pictures of dental structures. But due to the increasing number of creators, they have become more common. Companies like Digitech and Like Sunup aggressively use influencer marketing to promote their Ring Light among a wide variety of users.”

The reflection of a ring light in the subject’s eyes in a video is a sign of an experienced producer, which sets them apart from amateurs. But now Ring Lite has also attracted working professionals from other sectors who buy them for their Zoom calls, says Thakur.

There is a ring light prototype at the entrance of the AS Electronics shop in Andheri, Mumbai. Binod Mali, 34, says store manager, “We started selling ring lights soon after the first lockdown in 2020, as the demand was high.” Most of their sales are currently to professionals working from home.

For members of the maker economy, ring lights are more than just a utility tool. “I Still Haven’t Thrown My First Ring Light That Cost Me” 500 because I love it,” says Pune-based Naik, whose latest ring light costs 10 times more than his.

Almost every creator has a story behind the first ring light. Naveen Singh (@bihariladka) was in class 10 when he first came to the ring light in March 2019. “I was studying in Kota at that time. My older brother called to tell me he had ordered it from Mumbai, and it will reach me soon,” recalls Singh, who shares his humor and a slice of life with 1.3 million followers on Instagram. famous manufacturer.it took 15 days.ring light,then the price 7,000, to reach that. “It was damaged in transit,” says Singh, who was recently named one of “India’s 25 Under 25 Instagrammers” by Instagram. “Even so, I continue to use the same Ring Light for all my videos and take it with me wherever I go,” he says.