Risk in front of the airport: they detected dry ravine – real estate advance on the coast 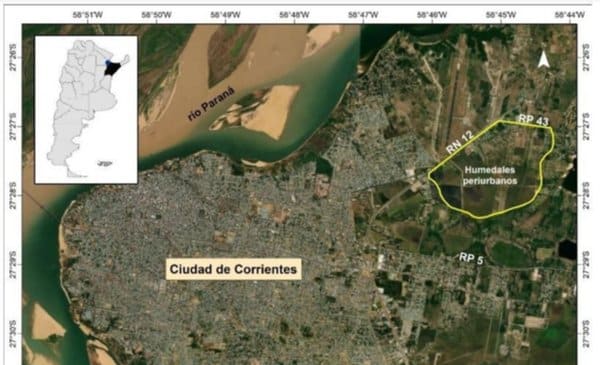 A team from the National University of the Northeast (UNNI) recorded the disappearance of a natural landscape in front of the airport in the city of Corrientes. Along with satellite images, he demonstrated the progress of real estate construction in a ravine that, he believes, will flood again.

As a result of the investigation, significant changes associated with local precipitation variability have been detected, either with the creation of stormwater drains after flood events, as well as with fires and urban infrastructure development in dry periods.

It is that the occupation of the Canadian Llanos was only 15% when there was intense rainfall, while in the opposite situation, the said value is 85%, confirming that the dry periods are the most important moments for urban planning in the current capital.

If floods are the main environmental threat to which the population of the city of Corrientes is exposed in peri-urban areas, even since the mid-19th century, it is difficult for the research team to understand how they continue to manifest themselves today , even including wetlands. Those with similar characteristics whose exposure to risk produces similar socioeconomic impacts as in the past.

Countering this proposition, Unne’s study indicated that one could speak of a population which, based on improvements in work or urban amenities, generates a “false sense of security”, believing that The risk is reduced.

“The aim of this work is to generate examples and records of landscape changes that have occurred in recent years so that future generations can know the landscapes that were being lost, thus avoiding a change in the reference point,” he added in the investigation. told.

The study was published in the latest edition of Contributions Scientificus Gaia, a journal of the Argentine Society of Geographical Studies.

The work was carried out by Victoria Monzon Holzhauser and Féliz Contreras.

The research team tracked changes to the Canada Llanos from 2016 to the present using Google Earth Pro.

During the 2016–2019 phase (associated with an El Niño event) an occurrence of extreme flood events occurred during the first semester and then the opposite extreme condition was recorded. An example of this is the severity and durability of drought events from mid-2019 to the present (La Niña event) both locally (in this case) and regionally, with the historical flow of the Paraná River. ,

“The transformation of the area through the generation of engineering works meant to carry out urban planning, considering a rain situation, could expose both the population and the landscape to extreme conditions,” they warned in the study.

An example of this is the creation of drainage channels in lagoons which increase their depth due to high amounts of rainfall but can contribute to their complete drying out during droughts if not controlled. Based on this idea, it has been possible to verify that the appearance of rain channels occurred after extreme flood events, whereas fires and the spatial growth of the city in this wetland were recorded during extreme droughts.

To the east and bordering the study area is a landscape of sandy hills, characterized by elevations with a topographic difference of four metres. The Soto Lagoon is located in this place, which was known during the 20th century as a tourist alternative to the Paraná River during the beach season.

From the study period, the Soto Lagoon received a strong demand to change land use from an environment dominated by a natural-rural landscape with a massive increase in urban infrastructure associated with the development of closed neighborhoods.

Currently, there has been a significant increase in housing density, increasing the risk of flooding of the population due to the overflow of the lagoon during extreme rainfall events. “We believe this is the main reason a drainage channel appeared in January 2017 from the lagoon to the Canada Llanos,” he explained to La Unne.

The first months of 2017 were the most significant in terms of recording excessive rainfall across the province. In response to the manifestation of this extreme hyper-humid period, storm water drainage engineering works began to be built with a dual purpose: on the one hand, to reduce the risks of flooding in the Llanos Gully and on the other hand to enable construction The rise in the real estate market of late for new homes.

With the manifestation of the La Niña event, and consequently, the period of extreme drought that lasts to date, no new storm water drainage works have been observed, but on the contrary, more recurrences of fires have been recorded in the ravine. Plains Although in a context of scarce rainfall, wetlands increase the likelihood of fires due to available flammable biomass, the subsequent increase in urban infrastructure in affected areas suggests that they were intentional.

Consequently, it is clear that, over a period of seven years, the Llanos ravine evidenced significant changes associated with precipitation variability, its natural responses and, above all, impacts associated with environmental changes and urban infrastructure development. In this sense, a total of 7.7 km of storm water drainage channels, 396.67 ha of burnt area and 197.56 ha of peri-urban development are calculated.

Of the total areas affected by the fire, three conditions emerge: 1) area burned once, 2) area burned twice, and 3) area burned three times (see map). Taking into account the recurrence of fire incidents in an area, the total affected area in the period 2016-2022 is 505.38 ha.

Urban infrastructure development has come to the fore in recent years, with a significant increase (see map), starting from 43 hectares by 2016 to 66.63 hectares during the period 2017–2019 (extreme flood period) and 65 hectares per year has increased. years between 2020-2021 (period of extreme drought).

Ignorance of the threats posed as a result of rainfall variability and the responses to the landscapes themselves, involved in a total change of location of settlers, contribute to increased vulnerability and generate a new vision or perception of these new settlers.

This situation is known as Change in Reference Point Syndrome (SCPR) which can pose a serious threat to biodiversity.

Reference point change syndrome is a psychosocial phenomenon in which a person accepts environmental conditions that he or she knows as if they were natural, ignoring past degradations that the environment has suffered.

The study area, which has a surface area of ​​500 ha, was described as a place belonging to marshes, the main reason being that the said area was uninhabited. In 2015, the layout of streets driven by a strong commercial demand increased land value (much lower than in gated communities) spurred rapid development of urban infrastructure.

In the city of Corrientes, precipitation is concentrated in the summer, spring and early fall (October–April) with monthly amounts in excess of 100 mm. The period between May and September corresponds to the dry period with monthly rainfall between 40 and 70 mm. For the authors, the mean annual rainfall is 1437 mm, recording a large variability of rainfall during the period 1962–2021.

During the period 2003–2018 Corrientes was in transition from a dry event to a normal event with two consecutive dry events (2008–2009 and 2011–2012). In which there was no progress in urban infrastructure in the study area so far.

From 2016, the most intense humidification event of the whole series mentioned until 2018 begins with a period of 25 months (March 2016 to April 2018), which caused a great impact in the urban space due to the morphometric modification of the periurban lagoon.