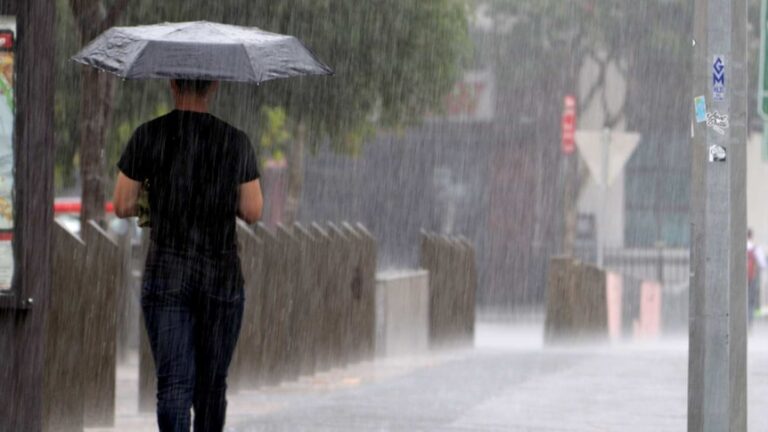 South-east Queensland is expecting a drenching today as a severe weather system continues to dump heavy rain, the Bureau of Meteorology (BOM) says.

BOM senior hydrologist Andrew Preece said most of the severe weather and flooding risk had eased in the state’s north and had pushed further south.

“We’re expecting that rain band to move off the coast and shift further south over the next couple of days,” Mr Preece said.

Since 9am yesterday, west of Brisbane saw the heaviest falls.

Meanwhile, parts of the Sunshine Coast hinterland received up to 140mm.

BOM said there was minor to moderate flooding in the Bremer River, Lockyer, Laidley and Warrill Creeks and Lower Brisbane River catchments.

Widespread rain totals of between 20mm and 90mm, and isolated totals of 177mm, had been recorded in those catchments in the 24 hours to 4am.

Mr Preece said the bureau was also expecting minor flooding in the Mary River catchment at Gympie, in upper Brisbane, and on the Sunshine Coast.

“Because we’ve had a prolonged wet season this year, catchments are already wet in a number of locations across the state,” he said.

“That means even with any small rainfall totals that are being forecast, we are expecting to see renewed river level rises.

“If we do get that locally intense rainfall associated with severe thunderstorms, there is a risk of flash flooding and therefore a risk to life for people traveling around in those particular areas.”

On Wednesday, a 31-year-old woman died in floodwaters when her car was swept off a causeway at Mount Ossa near Mackay.

Several rainfall records have already been broken in northern parts of Queensland.

On Wednesday, Hamilton Island in the Whitsundays, Charters Towers in the state’s north, and Emerald Airport in central Queensland recorded their highest May rainfall totals on record.

At Hamilton Island, 220 millimeters was recorded, exceeding the previous May record of 133 millimeters set in 1990.

“We’ve seen significant rainfall across much of Queensland … and quite significant for May,” Mr Preece said.

There was major flooding in Townsville in the state’s north on Wednesday after some parts recorded falls of more than 200 millimeters.

But by Thursday morning, it had receded to the minor level, of about 3 meters.

The Haughton River at Giru also reached a major flood peak of 2.85 meters on Wednesday afternoon with river levels expected to fall below the minor flood level late on Thursday morning.

Areas between Cairns and Mackay also received widespread falls between 50 to 200 millimeters on Wednesday.

Further south, Maryborough on the Fraser Coast, down the Sunshine Coast and Moreton Bay had 100 to 150 millimeters, with several local creeks on minor flood watch.

Beaches have been closed on the Sunshine and Gold coasts.

Mr Preece said the severe weather system was expected to ease on Friday and into the weekend as it moved off the coast.