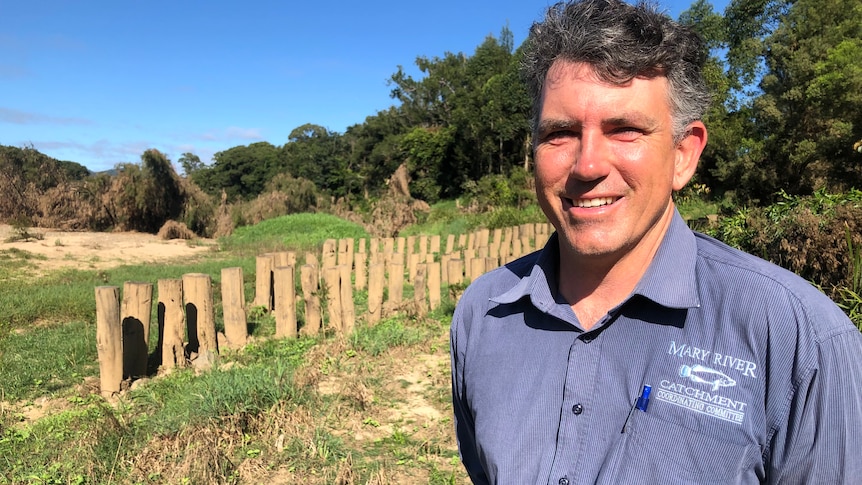 Twenty years ago, Brad Wedlock became frustrated with the condition of Queensland’s Mary River at Kenilworth, where each flood eroded thousands of cubic meters of farmland, releasing sediment to smother the southern side of the Great Barrier Reef.

Tree felling, sand and gravel mining and the misguided practices of the past have turned the once shady, flowing river into an erosion-ravaged waterway.

Fast forward to today and despite three floods this year, the once eroded banks stand strong and stable along the river’s access, which is being restored, thanks to community will and the commitment of dozens of people.

“Here this site looked terrible, there are no two ways about it; it was a terrible, terrible site. There isn’t much habitat for aquatic species such as [endangered] Mary River Cod,” said Mr Wedlock.

Of the 35 catchments that flow onto the Great Barrier Reef, the Mary River is the fourth largest contributor of fine sediments.

But as a project officer with the Mary River Catchment Coordinating Committee (MRCCC), Mr Wedlock has seen the transformative power that community will, money and careful planning can have.

In 2015, earthmoving equipment began to reshape eroded sand rocks in parts of the riverbank at Kenilworth, driving rows of 6-metre-tall wood piles to slow the flow of floodwaters.

ABC Rural last visited the project in 2019, and returned with Mr Wedlock to see how uplifting the restoration project had coped with nature’s recent extremes.

“We didn’t know what we were going to find [after the floods]Then when we got here, we were very happy. All the seedlings were intact,” he said.

Although the trees were hit by the rubble, they had strong roots and fertile silt was forming around the wood pile fields that would eventually rot.

A ribbon water plant called Vallisneria, important to the prehistoric lungfish that swam in these waters, had survived the third largest flood on record.

“They all washed away after the 2013 floods, so the lungfish had no habitat to lay eggs,” Mr Wedlock said.

“Seeing Vallisneria still here means we may have slowed down the system enough to hang, whereas after 2013 it took three years to come back.

“We were really happy with what happened here, it’s a really cool success story after these floods.”

More than 45,000 native riparian plants have been planted on Kenilworth’s riverbanks.

Ruth and Stephen Carter worked hard to help water hundreds of people at the UB station during the height of the drought.

As native plants grow, pile fields are disappearing and 10-meter cliffs are threatening their land and livestock, now only an unpleasant memory.

“We’ve lost a good 10 acres [four hectares] in 40-odd years, so this [project] certainly preserved it beyond any dream we ever had.”

The MRCCC is looking to repair at least 35 more worst-hit areas along the 320-km-long river.

“If we had $50 million we could probably fix all of that,” said Mr. Wedlock.

Ms Carter said she and her husband would strongly encourage other landholders to get involved.

“This project has been an amazing success and we are overwhelmed with the support we have received from all the stakeholders. They have all collaborated so well, it is a huge credit to all of them.”