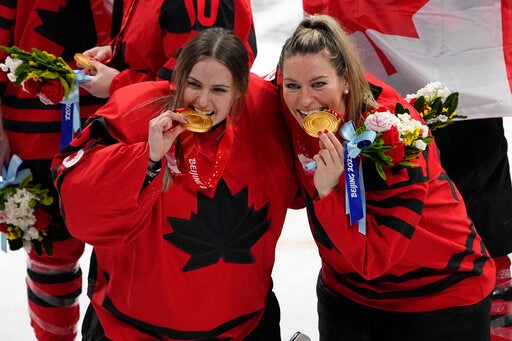 BEIJING ( Associated Press) — A roundup of gold medals from Friday, Feb. 18, at the Beijing Games:

Johannes Thingnes Boe looked like his old self again, dominating from the start and holding his composure through the four shooting stages to win the Olympic gold medal Friday in the biathlon mass start race.

Michelle Gisin of Switzerland, gold, left, and Federica Brignone of Italy, bronze, celebrate after the medal ceremony for the women’s combined at the 2022 Winter Olympics, Thursday, Feb. 17, 2022, in the Yanqing district of Beijing. ( Associated Press Photo/Luca Bruno)

The Norwegian great threw his arms in the air as he crossed the line in 38 minutes, 14.4 seconds.

Justine Braisaz-Bouchet moved to the front with strong, patient shooting and stayed there with her cross-country skiing to win the women’s biathlon mass start race at the Olympics.

Braisaz-Bouchet only missed once in the last standing shooting and skied out of the range in first place. She held on and crossed the line carrying a French flag in 40 minutes, 18 seconds.

Roeiseland took bronze, her fifth medal at the Beijing Games.

Sixteen years after he won the Olympic curling gold medal, Brad Gushue is going back to Canada with a bronze medal.

The Canadians capitalized on a missed final shot by the American — and reigning Olympic champion — John Shuster in the second-to-last end that turned a one-point edge into an insurmountable 8-5 lead.

Sweden and Great Britain will play for gold Saturday.

Ryan Regez led a 1-2 finish by Switzerland in the Olympic skicross final at Genting Snow Park.

Regez grabbed the lead early and never relinquished it along a course filled with bumps, jumps and rolling terrain. He raised his arms in triumph shortly after crossing the finish line.

Eileen Gu captured gold in the women’s ski halfpipe final on a breezy and cold morning to become the first action-sports athlete to earn three medals at the same Winter Olympics.

Gu warmed up with a score of 93.25 on her first run, before going even higher and even bigger to post a 95.25 her second. For her third and final pass, and with the contest locked up, she took a nice leisurely stroll.

The standout American-born freestyle skier who represents China already possessed a gold from big air and a silver from slopestyle.

Thomas Krol won gold in the 1,000 meters, giving the Netherlands its third straight Olympic speedskating title in the event.

The Netherlands earned its fifth gold medal in 12 events in Beijing with one day of competition remaining.