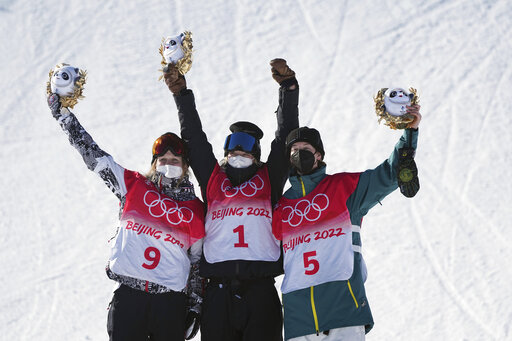 BEIJING ( Associated Press) – A roundup of gold medals at the Beijing Games from Sunday, February 6:

Russian skier Alexander Bolshunov quickly pulled away from the pack to win a gold medal in the 30-kilometer skiathlon.

World Cup, the leader in distance running, Bolshunov crossed the finish line in an hour, 16 seconds. Finland’s Bolshunov and Ivo Niskanen led the race through the first four classic ski laps, but Russia’s Denis Spitsov once overcame Niskanen on the freestyle legs.

Spitsov remained ahead and took silver, one minute and 11 seconds behind Bolshunov. Niskanen had won the bronze two minutes earlier.

Zoi Sadowski Synnott won New Zealand’s first gold medal in Winter Olympic history, easing a pressure-filled run on her last trip down the mountain on Sunday to win the title in the women’s slopestyle.

After landing he raised his hands in the air, knowing what he had done. Silver-winning Marino and Australia’s bronze medalist Tess Cody knew it too. He gang-tacked her at the finish line to celebrate.

Nils van der Poel gave Sweden its first Olympic speedskating medal since 1988, making a stunning comeback to win gold in the 5,000 meters at the Beijing Olympics.

Van der Poel was a big favorite coming into the event as the defending world champions with an undefeated record in distance events on this season’s World Cup circuit.

He lived up to the hype in the 12 1/2-lap race at the Ice Ribbon Oval, turning up the pace at the end to beat Patrick Roost of the Netherlands with an Olympic record of 6 minutes, 8.84 seconds.

Rost won the silver and the bronze went to Norway’s Halgir Engebraten.