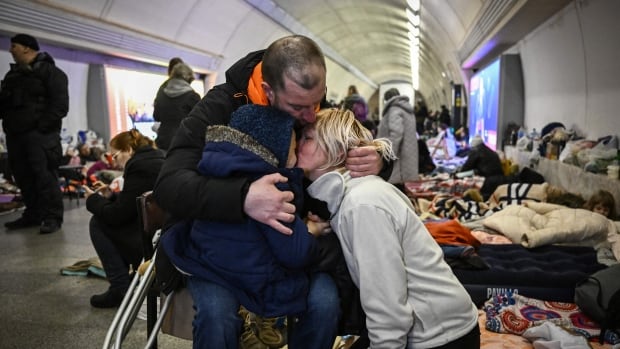 Russia renewed its assault Wednesday on Kharkiv, Ukraine’s second-largest city, in a pounding that lit up the skyline with balls of fire over populated areas, even as both sides said they were ready to resume talks aimed at stopping the new devastating war in Europe .

The escalation of attacks on crowded cities followed an initial round of talks between outgunned Ukraine and nuclear power Russia on Monday that resulted in only a promise to meet again. It was not clear when new talks might take place — or what they would yield. Ukraine’s leader earlier said Russia must stop bombing before another meeting.

Ukrainian President Volodymyr Zelensky has decried Russia’s bombardment as a blatant terror campaign, while US President Joe Biden warned on Tuesday that if the Russian leader didn’t “pay a price” for the invasion, the aggression wouldn’t stop with one country.

Russian Foreign Minister Sergei Lavrov, meanwhile, said if a third World War were to take place, it would involve nuclear weapons and be destructive, the RIA news agency reported.

On Wednesday, a Russian strike hit the regional police and intelligence headquarters in Kharkiv, a city of about 1.5 million, killing four people and wounding several, the state emergency service of Ukraine said. It said that residential buildings were also being hit, but did not provide further details.

A blast blew the roof off of the five-storey police building and set the top floor alight, according to videos and photos released by the service. Pieces of the building were strewn across adjacent streets.

The attack followed a day after one in Kharkiv’s central square that killed at least six people and shocked many Ukrainians for hitting at the center of life in a major city.

Mariupol Mayor Vadym Boychenko was quoted by the Interfax news agency as saying that city officials, “cannot even take the wounded from the streets, from houses and apartments today, since the shelling does not stop.”

The overall death toll from the seven-day war is not clear, with neither Russia nor Ukraine releasing the number of troops lost.

On Wednesday, Ukraine’s emergency service issued a statement saying the Russian invasion has killed more than 2,000 Ukrainian civilians and destroyed hundreds of structures including transport facilities, hospitals, kindergartens and homes.

Children, women and defense forces “are losing their lives every hour,” said the statement, which could not be independently verified.

What’s happening on the ground

Meanwhile, the US president used his first State of the Union address to highlight the resolve of a reinvigorated Western alliance that has worked to rearm the Ukrainian military and adopt tough sanctions, which he said have left Russian President Vladimir Putin “isolated in the world more than he has ever been.”

“Throughout our history we’ve learned this lesson — when dictators do not pay a price for their aggression, they cause more chaos,” Biden said. “They keep moving. And the costs and threats to America and the world keep rising.”

‘Putin was wrong,’ Biden says in state of the union

US President Joe Biden denounced the Russian invasion of Ukraine in his first state of the union address, saying Vladimir Putin thought the world could be divided, but the Russian president had been proven wrong. Jabin Botsford/Reuters 1:01

British Prime Minister Boris Johnson and Ukraine’s president have agreed on a call that sanctions need to go further to exert maximum pressure on Putin in coming days, a Downing Street spokesperson said on Wednesday.

China won’t join the United States and European governments in imposing financial sanctions on Russia, the country’s bank regulator said Wednesday. China is a major buyer of Russian oil and gas and the only major government that has refrained from criticizing Moscow’s attack on Ukraine.

The updates on sanctions came a day after Ukrainian authorities said that five people were killed in an attack on a TV tower near central Kyiv. A TV control room and power substation were hit, and at least some Ukrainian channels briefly stopped broadcasting, officials said.

President Volodymyr Zelensky’s office reported that the site of a Holocaust memorial, which is adjacent to the TV tower, was also hit. A spokesperson for the memorial said a Jewish cemetery at the site, where Nazi occupiers killed more than 33,000 Jews over two days in 1941, was damaged, but the extent would not be clear until daylight.

Russia previously told people living near transmission facilities used by Ukraine’s intelligence agency to leave their homes. But Russian Defense Ministry spokesperson Igor Konashenkov claimed Wednesday that the airstrike on the TV tower did not hit any residential buildings. He did not address the reported deaths or the damage to the Holocaust memorial.

WATCH | The Canadians going to fight, assist in Ukraine,

The Canadians going to fight, assist in Ukraine

As thousands flee the war in Ukraine, some Canadians are traveling there to take up arms or assist with the growing humanitarian needs even though many don’t have direct ties to the country. 3:02

Moscow, meanwhile, made new threats of escalation Tuesday, days after raising the spectre of nuclear war. A top Kremlin official warned that the West’s “economic war” against Russia could turn into a “real one.”

Inside Russia, a top radio station critical of the Kremlin was taken off the air after authorities threatened to shut it down over its coverage of the invasion. Among other things, the Kremlin is not allowing the fighting to be referred to as an “invasion” or “war.”

Ukraine’s Defense Ministry, meanwhile, said it had evidence that Belarus, a Russian ally, is preparing to send troops into Ukraine.

A ministry statement posted early Wednesday on Facebook said the Belarusian troops have been brought into combat readiness and are concentrated close to Ukraine’s northern border. Belarusian President Alexander Lukashenko has said his country has no plans to join the fight.

WATCH | Thousands of refugees pour into Poland from Ukraine daily:

Thousands of refugees pour into Poland from Ukraine daily

More than half a million refugees have already streamed out of Ukraine, many to Poland, where the humanitarian strain is already showing and is only expected to get worse. 3:24