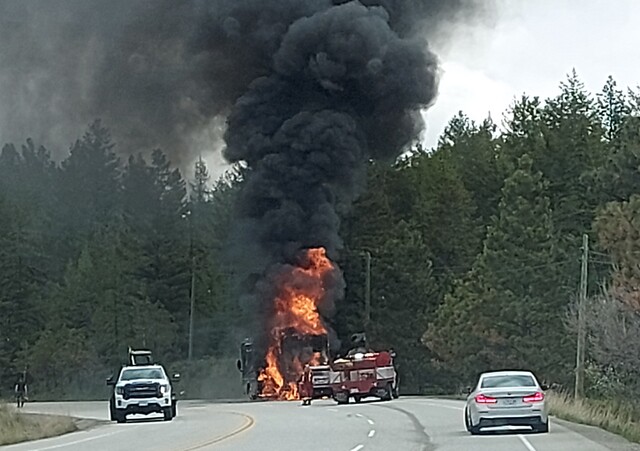 Highway shuts down as RV burns

An RV is burning on Highway 3 east of Ososyuos on Sunday.

It was completely on deck for the Anarchist Mountain Fire Department (AMFD) on Sunday afternoon as they tried to fully control the RV fire on Highway 3.

A fire broke out in a motorhome just after 12 p.m. on Highway 3 East by Eagle Point on Anarchist Mountain.

AMFD says two people aboard the RV had fled before the fire spread.

AMFD closed the highway in both directions.

Several explosions were caused by tire bursts and at least one explosion on board propane tanks.

AMFD attacked the fire using suppression foam. The fire was on the road and did not spread.

RCMP and BC ambulance were also present on the spot.

AMFD would like to remind motorists and spectators that the extremely toxic nature of fumes produced by vehicular fires is very dangerous, as well as the risk of explosion and flying objects.

A Castanet reader says the highway has reopened to single-lane alternative traffic near the scene of the fire.

An RV is burning Sunday afternoon on Highway 3 east of Ossouse, causing the highway to be closed.

The large RV caught fire just before noon, and photos and videos from the scene show it completely engulfed in flames.

A motorist walking in the area said that the highway is closed in both the directions. DriveBC has yet to report on closures.

The fire brigade team is engaged in extinguishing the fire at the spot.

It is not yet known what caused the fire or whether anyone was injured in the fire.

BMC to convert 5 star hotel in Mumbai to Kovid Center

IND vs ENG: Before the match, Virat Kohli made a big statement about the players