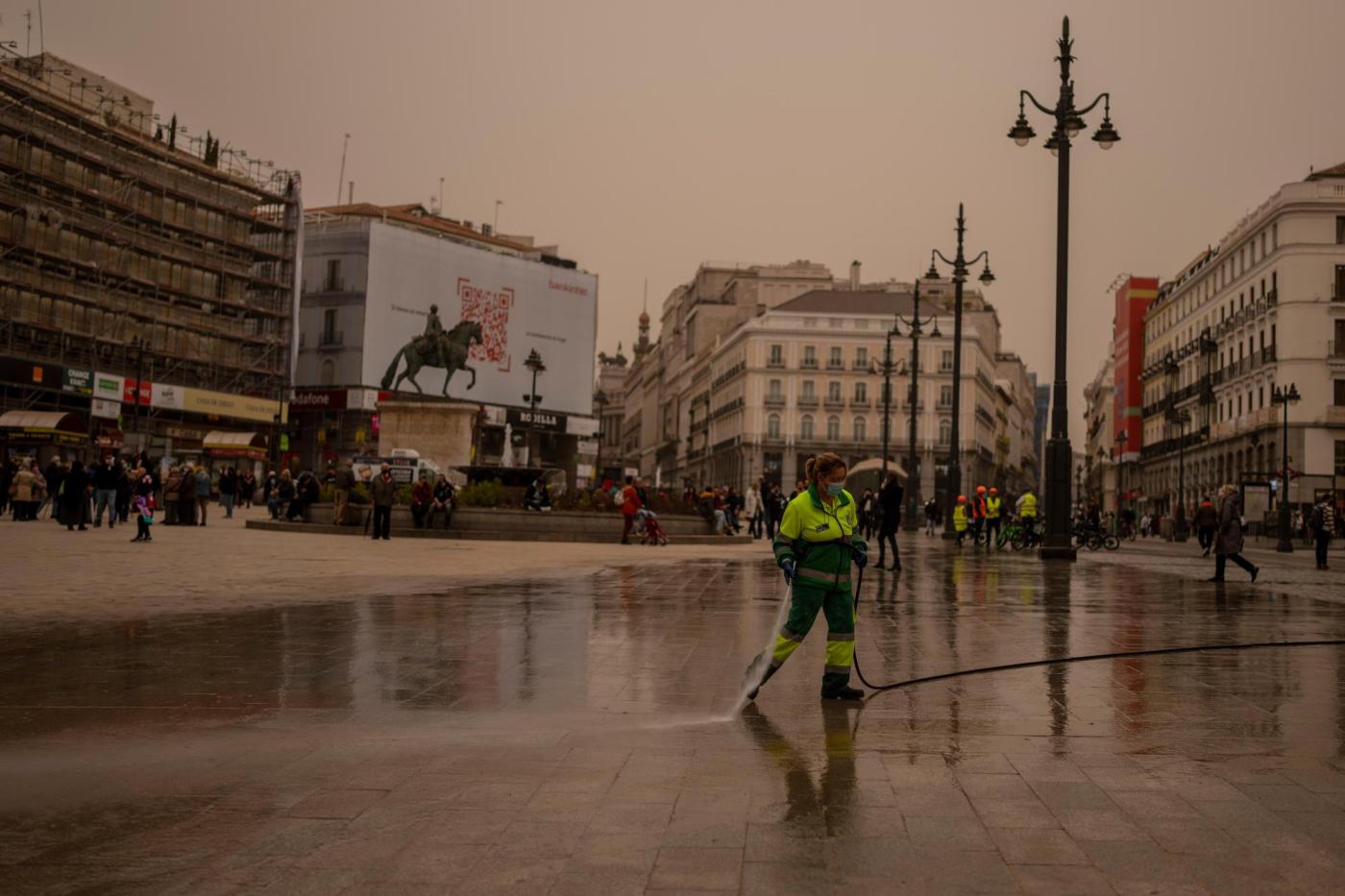 BARCELONA, Spain (AP) — A huge dust storm swirling over Europe from the Sahara desert made it hard to breathe in large parts of Spain for a second straight day on Wednesday and gave cleaning crews extra work as far away as Paris, London and Belgrade to remove the film of dirt falling on cars and buildings.

Europeans woke up to eerie skies, from the grimy gray in Madrid to orange-hues in the Swiss Alps, caused by the tiny particles that had traveled thousands of kilometers across the Mediterranean Sea.

The European Union’s Copernicus Atmosphere Monitoring Service said it was tracking the large mass of dust that has “degraded air quality across large parts of Spain, Portugal and France.”

While Spain is bearing the brunt of the storm, dust was flung far beyond, dumping ochre-colored blobs on cars in a rainy Paris and sifting a fine powder down on a huge swath of the continent.

Experts, including Spain’s national weather service, described the event as “extraordinary” for the amount of dust in the air but noted that it had not broken any records.

“This is an intense event, but this type of event typically occurs once or twice a year, normally in February or March, when a low-pressure system over Algeria and Tunisia gathers up dust and carries it north to Europe. Dust can reach the UK, or even Iceland, as it did last year,” Carlos Pérez García, a researcher studying atmospheric dust at the Barcelona Supercomputing Center, told The Associated Press.

The area of ​​Spain rated by its national air quality index as “extremely unfavorable” — its worst rating — expanded from the start of the European event on Tuesday to include most of the nation’s southern and central regions, including Madrid and other major cities like Seville .

Authorities recommended for people to wear face masks — still in wide use because of the pandemic — and avoid outdoor exercise, especially for those people suffering respiratory diseases. Emergency services for Madrid told the AP that so far there had been no increase in calls for care to people with breathing problems.

Visibility was reduced for a large part of Spain. Municipal cleaners swept up the dust from city streets. In Spain’s south, the dust mixed with rain to produce mud.

Curious photos and videos of the dust popped up on social media, including snowboarders cutting beautiful white lines through the red-tinged snow in the Pyrenees Mountains.

Rubén del Campo, for Spain’s weather service, said that the largest quantities of air-born dust will accumulate on Wednesday afternoon in Spain’ southeast and central regions.

“The air will then begin to clear a little by little, although some floating dust will reach the Canary Islands (in the Atlantic Ocean) over the weekend,” Del Campo said.

To the relief of farmers, the storm front that pulled in the African dust is also forecast to bring more rain over the coming days to Spain’s parched fields and descending reservoirs.

In Switzerland, skiers cut through orange-tinted snows on the Alpine slopes of the Pizol resort near tiny Liechtenstein, while reddish-hued skies loomed over places like the Payerne Air Base near Lake Neuchatel.

The national weather service, MeteoSwiss, said aerosols regularly swoop up dust from the Sahara and the one that began Tuesday is the third recorded this year and most dramatic. Light from the sky was tinted yellowish-orange in Geneva as weather forecasters predicted skies would stay colored for several days.

The Serbian capital woke up Wednesday covered in a thick layer of yellow-color dust that covered pavements and parks after a light rain that fell overnight.

Belgrade, which is already one of the most capital capitals in Europe because of Serbia’s coal-powered electric plants and factories, has recorded “hazardous” air quality, according to AirVisual. Environmentalists said it is the result of the dust cloud, but also because of Serbia’s perennial pollution problems.

The dust cloud reached as far as London and southeast England Wednesday, and some of the dust settled on people’s windows and car windscreens as rain brought the particles down to ground level.

“It’s about as strong as it gets, as far as Saharan dust crossing to the UK,” said meteorologist Alex Burkill at the Met Office. “Rain has washed the dust from higher up in the atmosphere and brought it down to the surface, that’s why people are seeing it on their windows.”

He added that most people will not see any health impact but some may experience irritation in the eyes or a sore throat.

Sylvia Hui in London, John Leicester in Paris, Jamey Keatey in Geneva, Dusan Stojanovic in Belgrade, and Frank Jordans in Berlin contributed to this report.