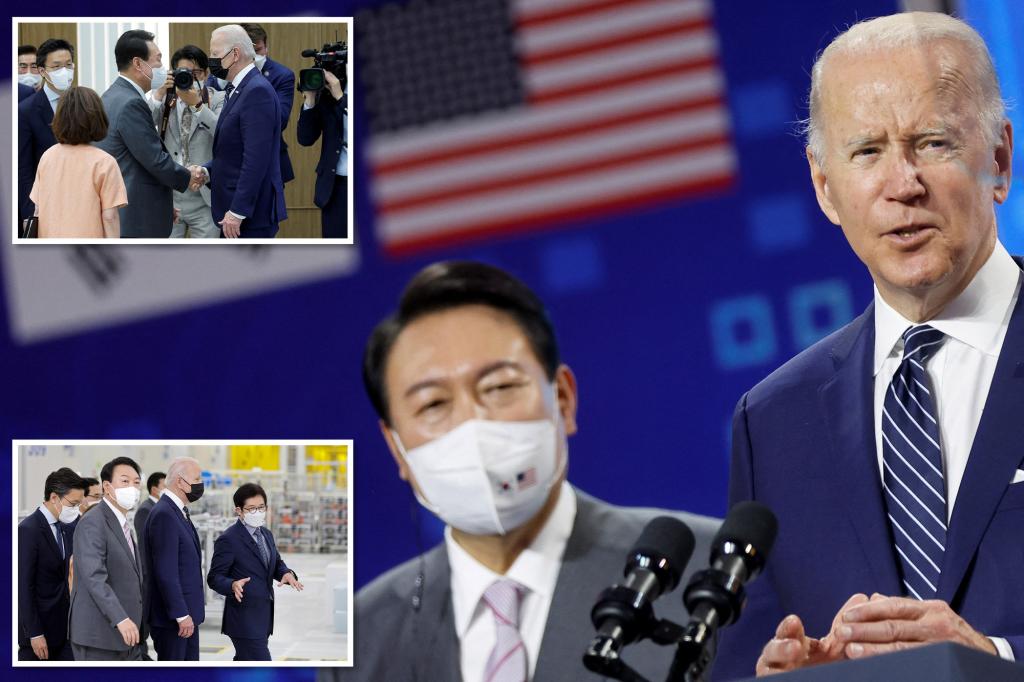 The Samsung executive who hosted President Biden on a tour of a South Korean computer chip plant on Friday had to be excused from a hearing in a fraud trial to do so.

Lee Jae-yong was allowed to skip court to welcome Biden and his South Korean counterpart, Yoon Suk-yeol, to the facility in Pyeongtaek, a court spokesperson told Reuters.

Lee’s absence was uncommon, as he had attended every single hearing in the case related to a 2015 merger between two Samsung-affiliated companies.

Just nine months ago, Lee was released from prison on parole, cutting short his 30-month sentence for embezzling corporate funds and bribery related to the merger.

Lee had originally been sentenced to five years in prison on the corruption charges in 2017, but a Seoul High Court ruling later reduced the sentence to 2.5 years.

His sentence was connected to a massive corruption scandal that ultimately led to the impeachment and ouster of former South Korean President Park Guen-hye, who has been imprisoned since 2017.

Lee also faces an indictment for alleged stock price manipulation, auditing violations as well as other charges connected to the 2015 merger, according to the Associated Press.

Lee’s legal team has insisted he did not commit any criminal acts and only participated in normal business activities.

In November, Samsung announced it would be opening a similar $17 billion plant in Taylor, Texas, outside of Austin — which it hopes to have up and running sometime in 2024.

Biden touted the plans in remarks following his Friday visit.

“Our two nations work together to make the best, most advanced technology in the world. This factory is proof of that,” the president said. “That gives both the Republic of Korea and the United States a competitive edge in the global economy if we can keep our supply chains resilient, reliable and secure.”

“This vibrant democracy has become a powerhouse of global innovation by investing in educating its people, in companies like Samsung that are driven by responsible development of technology and innovation,” he added. “It’ll be critical to shaping the future in the direction of our two countries, the direction we both want to go.”

Gophers Football vs. Colorado: The Keys to the Game, How to Watch and Who Has the Edge