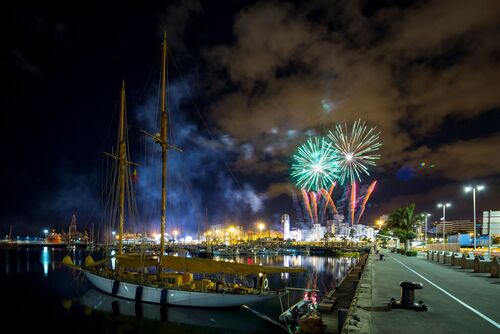 The municipality will give priority to visual effects over sound, for which it has rented pyrotechnic materials with a minimum content of gunpowder, explained Alfonso Cabello

The City Council of Santa Cruz de Tenerife, through the Autonomous Organization for Fiestas and Recreational Activities (OAFAR), has prepared its usual fireworks display to welcome the New Year, which will have a lower noise effect.

The councilor of the fiestas, Alfonso Cabello, insisted that “Santa Cruz de Tenerife prioritizes visual effects over sound”, for this, “the pyrotechnic materials are rented with only 3 grams of gunpowder per piece.” This amount, he explains, “allows the casing to break up in the wind and a fireworks display can be performed with a minimum of sound effects.”

Cabello insists that “Santa Cruz de Tenerife renounces any type of exhibition that prioritizes noise, in the Mascaleta style or the Thunder-type rocket”; and that “in this way a framework of coexistence is promoted with a special focus on very vulnerable people, such as those affected by autism spectrum disorders, in addition to animal welfare.”

The fireworks display will last about 15 minutes and will be launched from around the Plaza de España, just at the end of the twelve bells that mark the beginning of the year 2023, and will be a visual complement to the party celebrated from 11:00. The stage at Plaza de la Candelaria in the afternoon was brought to life by Renzo El Selector, Grupo Saoco, DJ Fabrizio Salgado, DJ Wes, The Boys Machine Orchestra and Acapulco Orchestra.