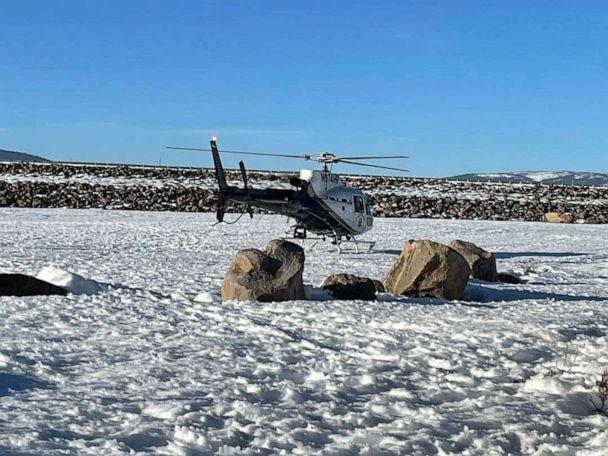 A desperate search was on in Northern California for one of six ice skaters who fell through the melting surface of a frozen-over reservoir as the temperature soured well above freezing, authorities said.

Disaster struck Saturday afternoon at the Stampede Meadows Reservoir near Truckee in the Sierra Nevada Mountains when the ice broke under the weight of a group of ice skaters, according to a statement from the Truckee Fire Protection District.

Five of the skaters managed to pull themselves from the frigid water, but one person failed to emerge, fire officials said.

As a dive team from the Washoe County Sheriff’s Office responded to assist in the search, fire officials cautioned people to stay off the iced-over reservoir and lakes and ponds in the area about 16 miles north of Lake Tahoe.

“It is impossible to know the safety and stability of the ice, especially with the recent warmer temperatures,” the Truckee Fire Protection District said in its statement.

Temperatures in the Truckee-Lake Tahoe area climbed into the mid-40s on Saturday from a low of about 12, according to the National Weather Service.

The incident occurred a week after the fire protection district firefighters conducted surface ice rescue training and sent out a warning on Facebook of the dangers of people and their pets venturing out on the area’s frozen waterways.

Meanwhile, some Southern California residents were being warned of escalating winter wildfire danger as strong Santa Ana winds kick up and temperatures climb into the unseasonably warm upper 80s.

Moderate to locally strong Santa Ana winds are forecast for Sunday night and into Monday across Ventura and Los Angeles counties in Southern California, according to ABC News meteorologists. Wind gusts of 40 to 50 mph were expected for the region, with isolated gusts up to 60 mph.

Blowing dust is also expected to reduce visibility across the region, and downed power lines and tree limbs are possible with the strongest gusts.

Another round of Santa Ana winds is likely on Wednesday and into Thursday, coupled with unseasonably warm temperatures. Record high temperatures in the mid-70s and upper 80s are possible for parts of Southern California on Thursday.

Burbank, California, is forecast to reach 86 degrees, coming within two degrees of the record of 87 degrees set in 1939.