Security doors failed in a fire in an apartment in the Bronx, which killed 17 people 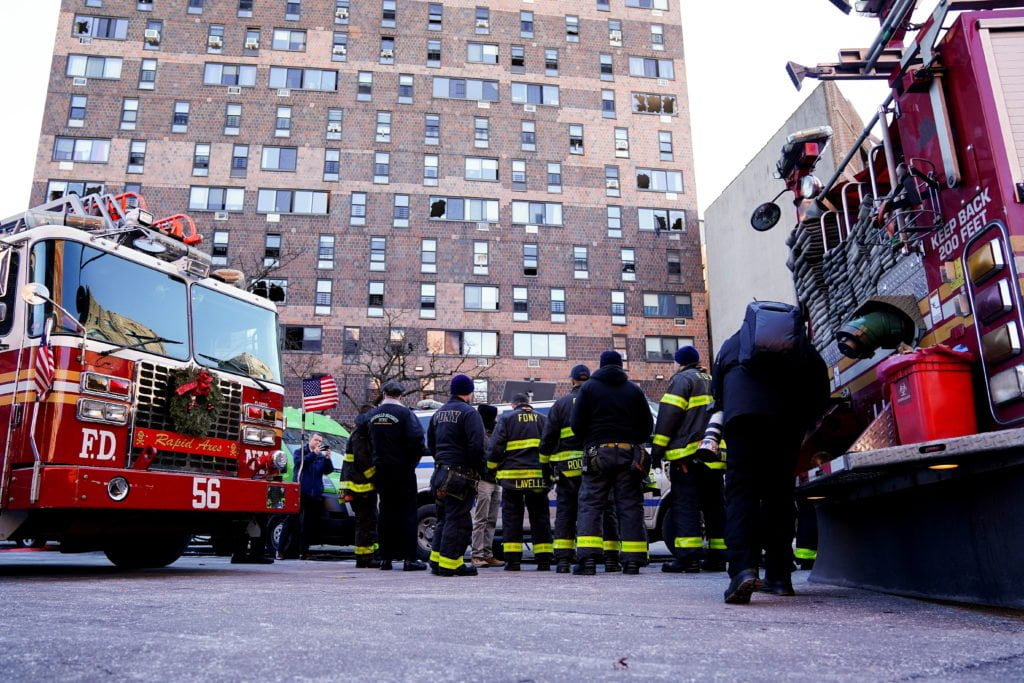 NEW YORK (AP) – On Monday, investigators were looking for answers to the question of why security doors did not close when a fire broke out in a high-rise building in New York, allowing thick smoke to rise through the tower and kill 17 people, including eight children, in the deadliest city fire. blaze for more than three decades.

A faulty electric heater appeared to be the cause of the fire on Sunday in a 19-story building in the Bronx, fire officials said. The flames damaged only a small part of the building, but smoke poured through the open door of the apartment and turned the stairwells into dark, ash-filled death traps. The stairs were the only way to escape in a tower too high for fire exits.

Fire Commissioner Daniel Nigro said the front door of the apartment and the door on the 15th floor should have closed automatically to prevent smoke from spreading, but the doors remained completely open. It is unclear if the doors broke mechanically or if they were manually disabled. Nigro said the apartment door was not locked.

The thick smoke prevented some residents from escaping and incapacitated others as they tried to escape, fire officials said. Firefighters carried out the limp children, gave them oxygen and continued to rescue even after they ran out of air.

“It’s amazing that the failure of one door can lead to as many deaths as we have here, but this is the reality,” Corbett said. “This single door was critical in spreading fire, smoke and heat vertically through the building.”

Dozens of people were hospitalized, including several in critical condition. Mayor Eric Adams called it “untold tragedy” at a press conference near the scene on Monday.

“This tragedy will not define us,” Adams said. “It will show our resilience.”

Adams cut the death toll on an initial report on Sunday, saying two fewer people were killed than originally thought. Nigro said the patients were taken to seven hospitals and “there was a kind of double counting.”

According to city councilor Oswald Feliz, children as young as 4 were among the dead.

An investigation is underway to determine exactly how the fire spread and whether something could have been done to prevent or contain the fire, Nigro said.

The fire department said the heater had been on for a “long period” before the fire started. According to spokesman Frank Dwyer, the reasons for his failure remain to be seen. The fire then quickly spread to nearby furniture and bedding, Dwyer said.

Nigro said the building’s heating was on before the fire started and a heater was used to heat it.

But Stefan Bovogi, who lived with his wife in the building for about seven years, said the cold was a constant problem in his fourth-floor apartment. Bovogi said he has three heaters for the winter – for the bedrooms and the living room. The heating system, which was supposed to heat the apartment, “does not work for nothing.” He said he was complaining but it hasn’t been corrected.

Large new apartment buildings must have sprinkler systems and interior doors that close automatically to contain smoke and deplete oxygen from fire, but these rules do not apply to thousands of old city buildings.

The building was equipped with self-closing doors and fire alarms, but several residents said they ignored alarms at first because they were so common in the 120-apartment building.

Bronx Park Phase III Preservation LLC, the group that owns the building, said it is fully partnering with the fire department and the city to help residents.

“We are devastated by the unimaginable loss of life caused by this profound tragedy,” the statement said.

Ownership group spokesman Kelly Magee said that in July, maintenance staff repaired the lock on the front door of the apartment that started the fire and checked the apartment’s self-closing door during the renovation. According to Magee, there were no problems with the door after that.

New York City inspectors have ruled violations for problems with self-closing doors in five apartments in the building and one stairwell door over a dozen years, according to a database maintained by the Department of Housing and Development. The protocol states that all violations have been eliminated.

Residents smoking in stairwells sometimes turned on fire alarms, Magee said, and property managers worked with them to resolve the issue. She said the alarm went off properly on Sunday.

According to building codes, the tower should only have sprinklers in the debris compactor and laundry room because it has concrete ceilings and floors, she said.

WATCH: Ignoring building codes at the center of a fire negotiation at a warehouse in Oakland

Camber Property Group is one of three firms in a group of owners to acquire the building in 2020 as part of its $ 166 million purchase of eight affordable housing units in the area. Camber co-founder, Rick Gropper, worked with Adams’ transition team, advising him on housing issues. He has donated a dozen politicians in the last few elections, including $ 400 to Adams’ campaign last year.

New York has been slow to demand sprinklers for old apartment buildings, passing laws obligating them in high-rise office towers after 9/11, but in recent years rejecting a bill that would require such measures in residential buildings.

In 2018, a city MP proposed introducing automatic fire sprinklers in residential buildings 40 feet and above by the end of 2029, but this measure was never taken and the MP recently stepped down.

The sprinkler system caused by the heat in the apartment could save lives, said Ronald Siarnicki, executive director of the National Foundation for Fallen Firefighters.

“It would most likely put out this fire, or at least contain it and not produce as much toxic smoke,” Syarnicki said, adding that fire groups have been lobbying for stricter sprinkler requirements for years.

The building is home to many Gambian families in West Africa.

Resident Karen Dehesus said she was used to hearing fire alarms go off.

“It was only when I really saw the smoke going through the door that I realized that it was a real fire, and I began to hear people screaming:“ Help! Help! Help! ”She said.

Dehesus, who was in her two-story apartment with her son and 3-year-old granddaughter, immediately called family members and ran to get some towels to put under the door. But smoke began to descend on her stairs before the 56-year-old resident could get towels, so all three ran to the back of the apartment.

“It was so scary,” she said. “It’s just the fact that we’re in a burning building and you don’t know how to get out of there. You don’t know if firefighters will come to you on time. “

Firefighters broke into her door and helped all three climb out of the window and down the stairs to safety. Dehesus clung to his savior on the way down.

The fire has become the deadliest in New York since 1990, when 87 people died when the Happy Land social club, also located in the Bronx, was set on fire. The Sunday fire came just days after 12 people, including eight children, died in a house fire in Philadelphia.

The Chicago Bears interviewed Ran Carton for a CEO position. Here’s what you need to know about the director of professional staff for...