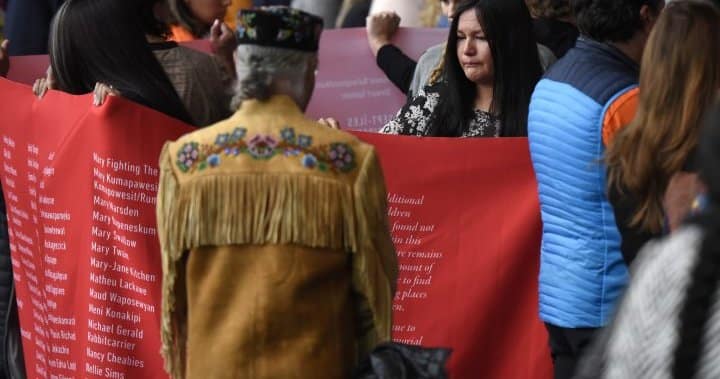 For the past six years, Geraldine Shingoose has been sharing her truths as a residential school survivor — or warrior as she prefers to be called — in Manitoba classrooms.

As Canada prepares to recognize the first National Day for Truth and Reconciliation Thursday, Shingoose, who is affectionately known as Gramma Shingoose, says the desire to hear from survivors has soared across the country.

“This year, 2021, is a year of truth for us survivors,” Shingoose said in an interview.

When the Tk’emlups te Secwe’pemc Nation announced the grim discovery of what are believed to be the 215 unmarked graves at the site of a former residential school in Kamloops, BC, Canadians had to face the horrific realities live with while being forced to attend the schools.

Stories of unmarked burial grounds were featured in a report from the Truth and Reconciliation Commission from 2015, but the events of this summer sparked a national conversation unlike anything before.

The federal government implemented Sept. 30 as the National Day for Truth and Reconciliation, which is a direct response to one of the commission’s calls to action. The day is a statutory holiday for all federal employees and federally regulated workplaces.

Some schools, businesses and different levels of government across the country are also choosing to observe the day, which is also known as Orange Shirt Day.

As non-Indigenous people in Canada navigate the best way to commemorate and honor survivors and their families, educators and those who were forced to attend the schools are offering advice on what can be done in the lead up to Sept. 30.

“I ask Canada to see us, to hear us and to believe us,” she said, echoing the sentiments of Murray Sinclair, who served as chairman of the Truth and Reconciliation Commission.

This year Shingoose suggests Canadians take a moment of silence at 2:15 pm — referring to the number of graves found in Kamloops.

She adds small gestures such as displaying an orange shirt in your window can have a powerful impact on survivors.

Shingoose and other survivors set out on a trip from Winnipeg to Kamloops over the summer. Along the way, they saw displays of solidarity in the windows of homes and businesses.

“It (was) so beautiful to see. I (was) really touched by seeing all of that,” said Shingoose.

When it comes to sharing the history of residential schools in classrooms, some educators say the topic can and should be broached early for school-age children.

In some provinces, the topic has been deemed inappropriate for younger grades.

Linda Isaac is an educator from Alderville First Nation in Ontario and the national director of Indigenous education, equity and inclusion at educational publisher Nelson. She said education for younger children should include the importance of elders in the community, what an Indigenous family may look like, or important core values ​​for Indigenous families.

“If we can educate young children about the importance of family and community and harmony and all of those things that are part of Indigenous life and ways of knowing, so that they fully understand the impacts, we’ll have a new generation of people, she said.

Charlene Bearhead is the director of reconciliation at the Royal Canadian Geographical Society. She has spent her career as an educator and Indigenous education advocate.

Bearhead said education on residential schools needs to happen year-round, but teachers can pass on their own calls to action for students to share what they’ve learned with family, friends or their faith communities in the days leading up to Sept. 30.

The Indian Residential Schools Crisis Line (1-866-925-4419) is available 24 hours a day for anyone experiencing pain or distress as a result of their residential school experience.