SEP will “return the ball” to UNAM on Yasmin Esquivel’s title: “Do not avoid your responsibility” Adan Augusto López said that the Directorate General of Professions of the SEP does not have the authority to comply with the measure requested by UNAM.

In response you would argue that your Directorate General of Profession is not authorized to comply with the measure requested by the university. the only thing i could do is cancel title registration But that first requires a judicial resolution or disqualification, “something the university has not accomplished,” he said.

“There are precedents that should decide the matter in this matter, which are the University Council and the University Court, so National Autonomous University of Mexico will be askedto the rector, don’t run away from responsibility They said they have but they issue a resolution.

According to the official, on January 12, SEP chief Leticia Ramirez Amaya received the official 3/2003/0011 Signed by the rector of UNAM, Enrique Grau, consisting of two annexures. with a minute Academic and Scientific Integrity Committee Faculty of Higher Studies Aragon (FES Aragon) in which it indicates that the ministerial degree thesis is an adequate copy of the original submitted edgar ulis baez one year ago.

The second annexure contains the opinion of the university’s lawyer, who states that no university authority has the authority to issue a resolution in the matter, which is why he asks Ramírez that the General Directorate of Business revoke the degree in question. Be the doer

After announcing the resolution of the FES Aragón committee, UNAM insisted in a statement that the position of the current Minister of the Supreme Court of the Country (SCJN) cannot be abolished.

,university rules It lacks a mechanism to invalidate a degree issued by a national university, even if plagiarism of the thesis is documented”, he pointed out.

Eduardo said, “Professional titles are untouchable, since the university authorities do not have the power to invalidate them,” even less when the title is stable as in this case (…) nor plagiarism as a crime. contains elements to configure. Andrade, Constitutional Y Former Attorney General of UNAMin interview with radio thread At the end of December.

Following the report of the Secretary of the Interior, President Andrés Manuel López Obrador met this Monday at the National Palace with Minister Yasmin Esquivel and her husband, engineer José María Riobo, and assured them that they were rumors fabricated by the opposition. Field and media communication.

,have a campaign Not only for this matter, it is clear that the conservative and corrupt factions, who looted the country and want to return for their immovable property, have a media campaign, i.e. to attack us with the support of all traditional media any situation”, he alleged.

,I haven’t met lawyer Yasmin nor her husbandEngineer Ryobu, a great engineer, one of the most important structuralist professionals in the country”, he said. 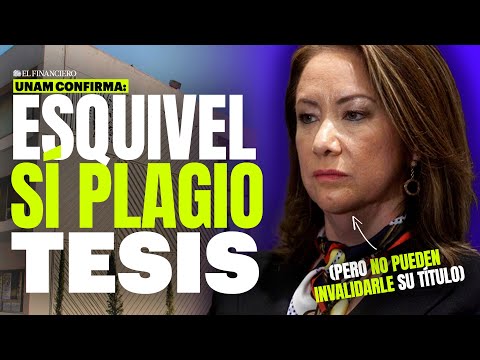