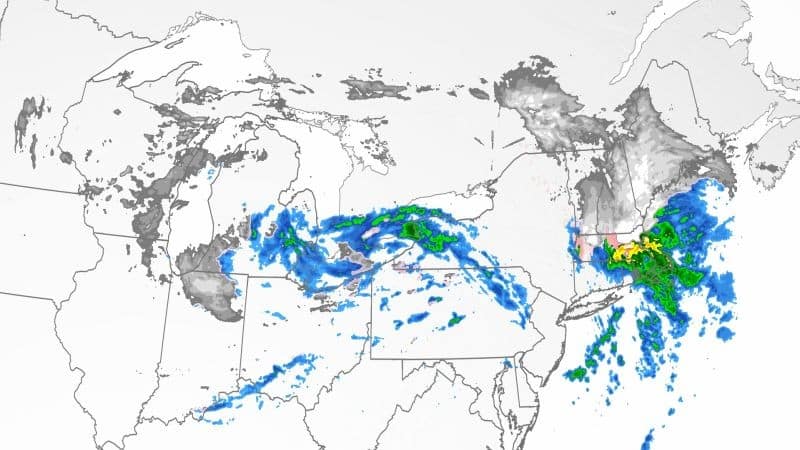 After a winter storm dumped up to 12 inches of snow on parts of the Midwest this week, the system shut down in the Northeast on Friday as officials warned residents of treacherous road conditions.

Nearly 7 million people on the path of the storm through the Northeast were on a winter weather watch early Friday as the first round of snow began in Vermont, New Hampshire, northern Massachusetts and Maine.

Additionally, snow mixed with a few inches of snow could accumulate in New York and parts of central and northern New England through Friday morning, the weather service said.

Overall, the region is likely to see snow, freezing rain, or a mix of both, with heavy snow falling in some areas, leading to poor road conditions. Snow could fall at a rate of 1 inch per hour this Friday morning in some areas of New England, though less is expected throughout the day.

The forecast has some officials urging residents to be prepared for the storm and a potentially ugly ride through Friday morning.

A winter storm will continue heavy snow and freezing rain across the Northeast through Friday. Another storm will develop over the Rockies and track east Friday into this weekend. Snow is possible from the southern High Plains toward the Northeast with heavy rain for the South. pic.twitter.com/jQB8gLACY2

In Maine – where the heaviest snow is expected in isolated areas across the state – the state emergency management agency said officials were bracing for “the first significant snowfall of the year.”

“Motorists should allow more travel time this Friday both morning and evening as roads may be slippery,” the agency said.

“Take steps now to keep yourself and your family safe,” said Robert Buxton, who heads the state’s Department of Homeland Security and Emergency Management. “If you must travel, make sure your car’s winter emergency kit is ready.”

Winter storm warnings extend from Concord, New Hampshire to Eastpoint, Michigan. Cities like Portland, Maine and Concord could pick up 6 to 9 inches of snow.

The storm proved dangerous in parts of the Midwest, where dozens of Minnesota car crashes occurred Wednesday and Thursday, the state patrol said. Five people were injured and there were no deaths. Up to 7 inches of snow was recorded in Minnesota, while parts of Nebraska were hit by nearly 2 feet of snow.