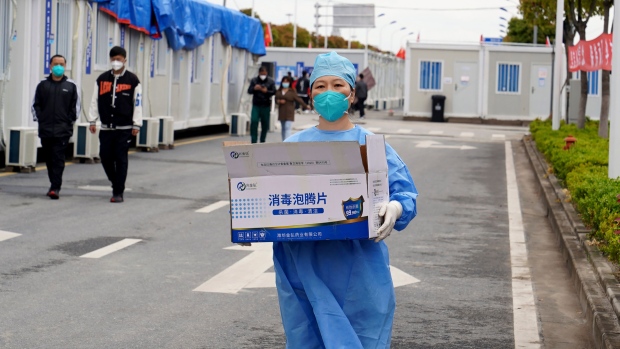 BEIJING – Shanghai authorities on Monday reported the first COVID-19 deaths in China’s most populous and wealthiest city, the latest outbreak.

Inspector Wu Ganyu of the city’s health commission told reporters that all three who died were elderly people who had underlying diseases such as diabetes and high blood pressure and had not been vaccinated against the coronavirus.

“After he entered the hospital, his condition worsened and he died after unsuccessful attempts to save him,” Wu said.

China says the death toll has risen to 4,641 since the virus that caused the disease was first detected in the central city of Wuhan in late 2019.

Most of Shanghai’s 25 million residents are being confined to their homes for a third week as China continues to implement a “zero-tolerance” strategy to contain the outbreak, potentially isolating anyone infected. demands.

China said on Monday that 23,362 people had tested positive for the virus in the past 24 hours, most of them showing no symptoms and almost all of them in Shanghai.

The city has reported more than 300,000 cases since the end of March. Shanghai began easing restrictions last week, although officials have warned the city’s outbreak is not under control.

Shanghai, which is home to China’s largest port and most important stock exchange, was not prepared for such a huge undertaking.

Residents ran short of food and daily necessities while in lockdown, and thousands of people placed under medical supervision have been placed in overcrowded facilities where lights are always on, garbage cans overflow, Food is insufficient and there are no hot showers.

Anyone who tests positive but has little or no symptoms needs to spend a week in a quarantine facility.

Concerns have risen about the economic impact of the government’s harsh policy.

China’s economic growth hit a still weak 4.8% in the first three months of 2022 from a year ago, as lockdowns cut production in major industrial cities. Official data shows growth accelerated from 4% in the previous quarter.

While the ruling Communist Party has urged more targeted containment measures, local authorities have routinely adopted stricter rules, possibly for fear of being fired or punished over outbreaks in their areas.

Online news site The Paper reported that in the city of Wenzhou, which has seen only a small number of cases, authorities have awarded prizes of up to 50,000 yuan (US$7,800) for information about people who falsified their health status. has been authorized.

What questions do you have about Omicron?

With the emergence of a new COVID-19 type of concern labeled Omicron, CTVNews.ca wants to hear from Canadians about any questions.

Tell us what you want to know when it comes to Omicron COVID-19 variants.