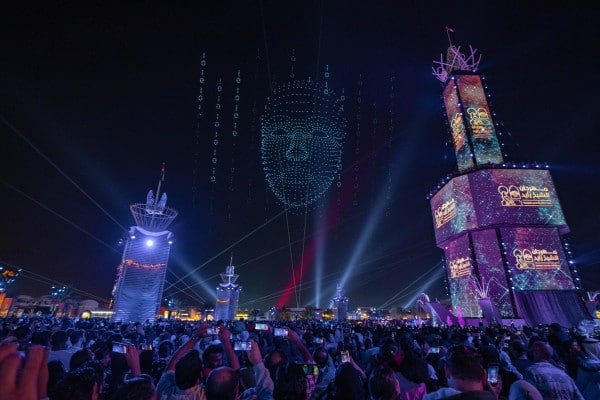 ABU DHABI, 01st January, 2023 (WAM) — On New Year’s Eve, the Sheikh Zayed Festival welcomed over one million visitors from the UAE and abroad, who gathered at Al Wathba to welcome the new year of 2023. Had happened Fireworks and drone show that broke four Guinness records.

The festival grounds were packed with spectators for the extraordinary spectacle of drones and fireworks, which lasted almost 60 minutes for the first time in the region and was documented by Guinness World Records.

Amidst the jubilant atmosphere, the largest fireworks display lasted for more than 40 minutes, and more than 3,000 drones flew in the sky over Al Wathba in different colors of light and formation, giving the crowd an extraordinary experience and at the end Welcome message received. The thrilling show that successfully broke three Guinness Records.

Commenting on this amazing milestone, Al-Waleed Osman, Guinness World Records Adjudicator, confirmed that the Sheikh Zayed Festival managed to break four records during the event, three of which were for fireworks displays and A new record was set by the spectacular drone show. ,

“We are delighted to see the Sheikh Zayed Festival celebrate its new year 2023, and we congratulate the organisers, who break annual records to delight audiences,” said Osman.

Festival goers documented amazing moments from the various shows and shared them on social media. Impressive performances were also broadcast on the festival’s social networks.

Emirates Fountain and Laser Show manages to impress visitors of all ages with dazzling laser and musical performances.