In the realms of regulation and competition, the ultimate political goal should be to maximize social welfare. In a previous article in this series, the basic economic logic behind the concept of welfare was explained. It was shown that the social welfare created by an activity depends on the units used of the product or service concerned and the utility derived by the consumer from that use. It was also explained that prices distribute welfare between producers and consumers and affect the level of both consumption and investment incentives.

As a result, regulators and politicians use prices to increase social welfare in the short term, jeopardizing their future stability. In the end, it was concluded that the best way to improve social welfare seemed to be to shift the demand curve to the right. This article will explain how this process works and the role productive profit plays in it.

Remember that the basis for calculating welfare is the demand curve. This curve represents the price that consumers pay for each unit of a product or service consumed, measured by their willingness to pay. Figure 1 shows that if the demand curve shifts to the right, social welfare for equal use increases. This is because consumers obtain more utility for each unit used.

Changes in demand may be exogenous to the market, not due to the actions of producers. For example, the utility of air conditioning by consumers is likely to increase, especially during hot summers. This will shift your demand curve to the right. From a political point of view, endogenous changes that may be driven by producers who find new uses for their products or, in general, improve them with features that allow them to better satisfy user preferences, are are more interesting.

For this to happen, the product must change or a successful innovation must be born. How is this process done?

Competition as a market discovery process

To understand this, it is a good idea to describe the competitive process as the market discovery process. [1], Illustration 2 shows the process graphically. 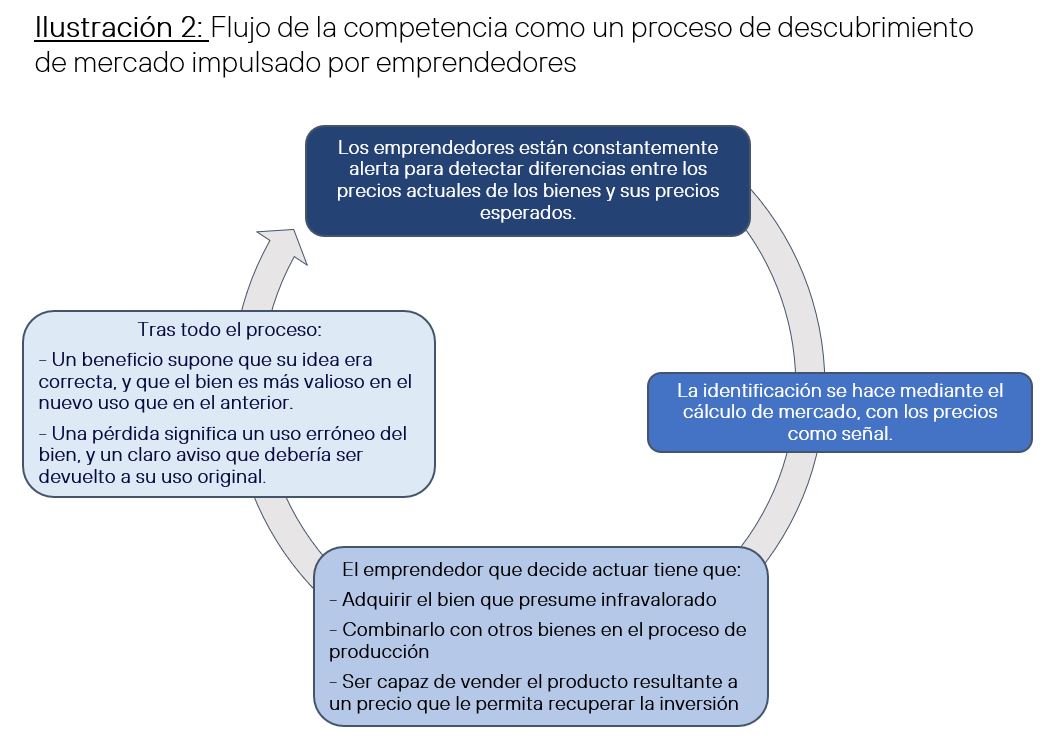 We recognize that information about consumer preferences is distributed among individuals and must be traced in some way. Thus, the market is understood as a dynamic search process generated by entrepreneurs who are constantly on the lookout for profit opportunities. This identification is made by calculating the market, with which they derive estimates that guide their decisions. In this context, prices act as signals for entrepreneurial activity.

Locating a business opportunity is equivalent to locating a more valuable use for a good. [1], What the entrepreneur decides to do is to acquire such a commodity and combine it with other goods in the production process, which always has a certain duration. Once this is done, you need to sell the resulting product at a price that allows you to recover the full investment along with the interest rate (time preference rate) over time. If, after the whole process, you have any profit left, it would mean that your guess was correct and that the new one that is in use is worth more than the good option. Conversely, the presence of a loss would indicate a mis-use of the asset, sending a clear signal that it should be returned to its original use.

If a benefit is visible, the greater good should be directed towards this new use. This would be done by the successful entrepreneur himself, who is logically in a privileged position to benefit from his discovery, or by the new entrepreneur attracted by the profit. The counterfeiting process continues until the profit is exhausted, due to an increase in the available stock of the resulting good or an increase in the prices of an initially low-priced good. This increase, in turn, will act as a profit signal, activating new competitive processes described in other markets.

Read Also:  My aunt has stage IV colon cancer. I hope her story makes you think twice about skipping screening

Trading opportunities depend on the difference between the current prices of commodities and their expected prices. Changes in prices, therefore, give rise to business opportunities: a price increase indicates an increase in the relative scarcity of a good, either due to an increase in its value to individuals (for example, because of a new use), Or due to reduction in available stock. A decrease in price indicates the opposite.

Thus, the market can be described as having the greatest value discovery in terms of uncertainty and its operation can be summarized around four key pillars [2],

1.- competition: Market agents are understood as competing activities in search of information on how to best meet consumer needs.

2.- knowledge and discoveryThe competitive process not only mobilizes existing knowledge, but also raises awareness of opportunities whose existence was unknown.

3.- benefits and incentivesProfits: Profits do not simply involve subtracting known costs from known revenues, but constitute an incentive to find out the difference between costs and revenues. In other words, profit is an indication that some goods are more valuable in new uses than in current ones.

4.- market value: at each instant, prices represent the exchange ratio negotiated between market participants; They inform entrepreneurs about the current valuation of assets and, consequently, about business opportunities.

The role of productive profit in shifting demand

It is clear from what has just been said that a rightward shift in demand, and consequently an increase in social welfare, is not a simple process. On the contrary, it is a process subject to a high degree of risk and uncertainty. [3]Since improvements to a product whose consumer value is not known in advance.

Moreover, the entrepreneur has to invest in the necessary items to be able to test his idea, he cannot do it without spending it. In short, entrepreneurs face a trial-and-error process, which is the only way to increase usability for users, a process that requires resources but often ends in failure.

Although success is not guaranteed, the more tests an entrepreneur can do, the greater his chances of finding a better product and shifting the demand curve to the right.

The quest for how to obtain a more valuable product for consumers is at the basis of many modern business management practices, such as the “method”.lean StartupBy Eric Rice, who explores how to efficiently use a limited budget for innovation. The discovery process is here compared to an airplane flying, which has two possible outcomes: success or failure.

narrow road (Way) left to start-up, that is, “how much time a start-up has left to take off or fail” is usually measuredwith money in the bank divided by the net withdrawal at the monthly expense rate, or the balance of the said account” [4], This applies to both start-ups and any established firm due to the changing and uncertain nature of consumer preferences. In fact, Rees even says that “The true measure of the track is the number of pivots left by the start-up., [5]Given the resources available to you.

Read Also:  Effects of severe COVID-19 on lungs after a year

In financial terms, what has been said means that capital expenditure (CAPEX) is required to shift the demand curve to the right. The more CAPEX is invested, the more ideas may be subject to trial and error. And moving the curve increases the chance of a collision.

Similarly, the CAPEX that a company can devote to discovery is directly related to the share of profit that a producer can retain. The reason is that this benefit will be available directly to the acquisition of new goods which allows the search process to be restarted.

In any case, an increase in social welfare should be observed as a result of the capex invested and with a certain delay in relation to the moment of investment; Also, higher CAPEX, a higher growth should be observed.

1.- Producers can increase social welfare by shifting the demand curve to the right. That is, discovering new uses or improving goods.

2.- The way in which this is achieved can be explained by understanding competition as a process of market discovery.

3.- In the market discovery process, entrepreneurs estimate (invest) resources in a trial and error process. They do this to learn about consumer preferences. Most of the time their ideas fail, but when they succeed, the demand curve shifts to the right. As a result, social welfare increases, often dramatically.

In the next entry in this series on social welfare, we will apply the methodology described in this post and the previous one to measure social welfare provided in the telecommunications market in both the European Union and the United States. We will also check whether the relationship between CAPEX and Kalyan that has just been described is correct in this case. Interesting? Stay informed and subscribe to our weekly newsletter to stay updated with all the news.

[3] As evidenced by any statistics on business failures or products launched and then discarded.

[4] “The remaining time in which a start-up must either gain lift—or fail”,Balance in the bank divided by the monthly burn rate of cash, or net withdrawals on that account balance” (Own translation). Rees E. (2011) see. lean startup, Crown Publishing, Chapter 8. This book introduces the concept of “Minimum Viable Product” (MVP, for its abbreviation in English), which is widespread today.

[5] ,The true measure of runway is how many pivots a start-up has left” (Own translation). For Reece”main base“There is a change in strategy, but the concept is directly generalizable to “explore ideas”.

Live: Daily Coronavirus News Updates, October 25: What You Need To Know Today About COVID-19 In The Seattle Area, Washington State And Around The...