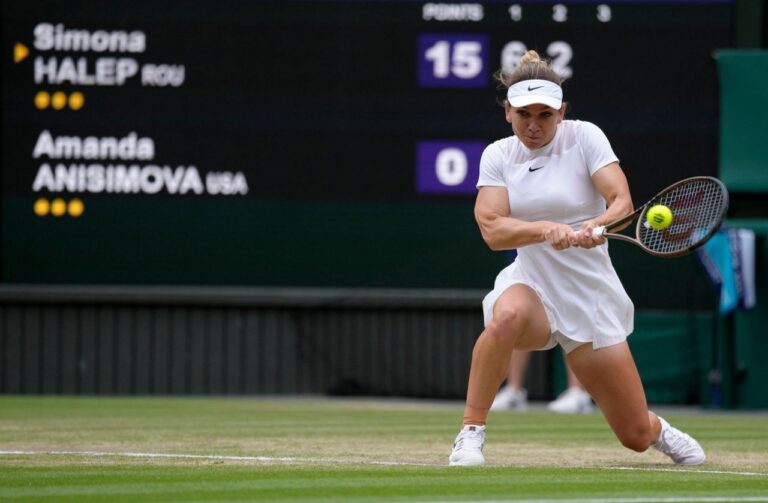 Wimbledon, England ( Associated Press) — In a roundabout way, Simona Halep is finally getting her chance to defend her Wimbledon title.

And she’s picking up where she left off.

Halep won the title in 2019 at the grass-court Grand Slam, but she missed out on her chance to play as the reigning champion in 2020 as the tournament was canceled amid the coronavirus pandemic. She missed her second chance last year due to a left calf injury.

“It was the best match of my life,” Halep said of her straight-sets win over Serena Williams three years ago. “Now I am playing really well. I believe that I am feeling the game the way I felt then.”

16th seed Halep extended her winning streak to 12 matches at the All England Club and reached the semi-finals for the third time after beating Amanda Anisimova 6-2, 6-4 at Center Court on Wednesday.

Halep will face Elena Rybakina in the second match of the day again on center court in the semi-finals on Thursday. Rybakina, seeded 17, defeated Ajla Tomljanovic 4-6, 6-2, 6-3 on the No. 1 court in Wednesday’s second quarter-final match.

Third seed Ons Jabur will play Tatjana Maria in the first semi-final match. They went on to win their quarterfinal match on Tuesday.

In the men’s quarterfinals, two-time champion Rafael Nadal was playing Taylor Fritz on center court. The winner will face Nick Kyrgios in the semi-finals on Friday. Kyrgios defeated Christian Garin 6-4, 6-3, 7-6 (5) on the No. 1 court.

Halep is making her 10th appearance at Wimbledon. She is the only Grand Slam champion in the women’s tournament, having won the French Open in 2018 before taking the title at the All England Club the following year.

The match against Anisimova felt as straightforward as her first four victories at this year’s tournament – ​​all in straight sets. But the 20th seeded American broke Halep as she served 5-2 for the match.

Anisimova had three more break points when Halep again worked the match to 5-4, but the Romanian won five straight points to finish the match.

“I feel like she played without thinking she had something to lose, so every ball was a really hard hit,” Halep said. “But I refused that she was going to come at 5 o’clock. Even if I was 0-40 years old, I was still a little hard on myself. I pumped myself. I served very well.”

Halep injured her left calf more than a year ago, forcing her to withdraw from last year’s French Open and Wimbledon. She began working with former Williams coach Patrick Mouratoglu in April and has now matched her best run in a major since reaching the semifinals at the 2020 Australian Open.

Next up for the Romanian will be 23-year-old Kazakh Rybakina, who is playing at Wimbledon for only the second time in his career. She lost in the fourth round last year.

Rybakina dropped her first set of the tournament but broke Tomljanovic early in the second and third sets. He finished the match with 15 aces.

“I think the key, of course, is my serve, aggressive play,” Rybakina said of his next match against Halep. “She’s a great champion. She’s moving really well, studying sports. I just try to do my best, focus on the things I can control: my serve, My shots, emo.