Six officers have been recognized as Cops of the Year 2022 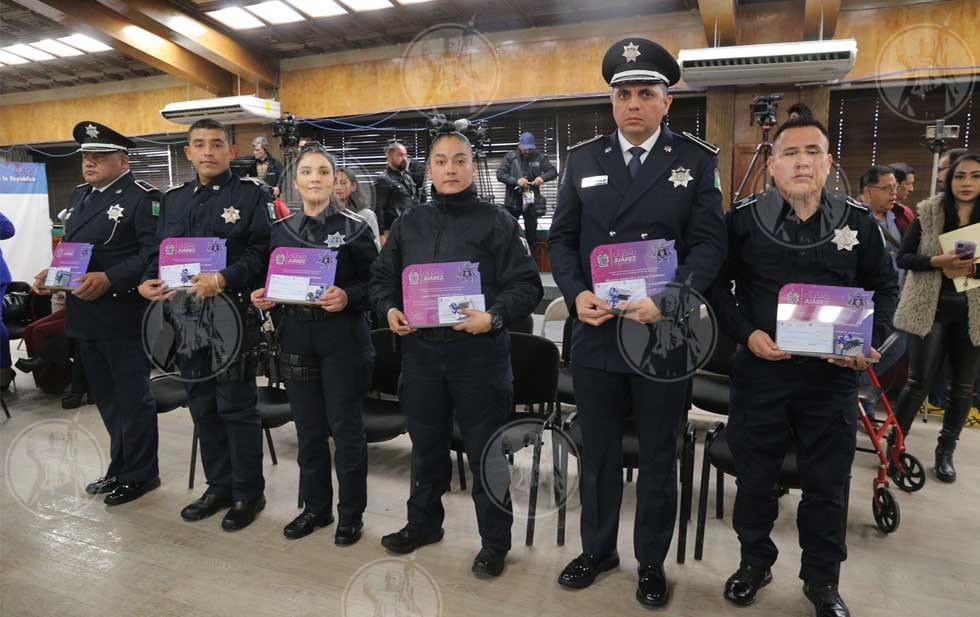 Juarez City.- The City Council recognized on this day the six elements as the Police of the Year 2022 in a solemn session of Cabaldo.

Councilor Mireya Poras, coordinator of the Public Security Commission, said that the winners were selected from 83 proposals.

The mayor said, “We have decided to give the award to six police officers, we have received 83 proposals, all of whom are worthy of the award.”

Each police officer received recognition and a cash prize of 50,000 pesos.

“Recognizing all of you on this Police Day. I thank you for your support of the corporation”, said Municipal Public Safety Secretary, Cesar Muñoz.

The winning agent is Francisco Antonio Molina González, he entered the Secretariat of Municipal Public Security on November 1, 2021, has the position of Second Police and is currently attached to the Canine Police Sector. He was recognized for his actions against insecurity that occurred on August 12, 2022, a day after the so-called “Black Thursday” in which he was hospitalized for 35 days with three bullet wounds And of which he is still recovering.

That day, the officer received instructions to attend to a report by radio informing anonymously that armed men were inside a vehicle and when he went, he found the vehicle with details of the report, including a warning to the driver to stop. was asked for. However, suddenly the man got out of the vehicle with a pistol and shot him. It was in front of a house where armed men opened fire on him and his companions and he was in fact seriously injured.

Agent Ricardo Alejandro Ochoa González entered the Municipal Secretariat of Public Security on January 13, 2017, having the rank of First Police. He has held various assignments in his police career such as Preventive State Police, Liaison Head and Analysis Head of Municipal Corporation. He currently works as manager of Plataforma Juárez, where he implemented a project designed by him for consultations on the intervention of operational personnel through the WhatsApp mobile application.

With the contribution of Ochoa Gonzalez, it was possible to increase the number of inquiries and reduce response times, as well as fewer errors when consulting names and vehicles, giving more accurate results, increasing the location of units with reports of theft and search warrants .Arrests, which revealed 1,925 arrest warrants with a monthly average of 175 warrants by November 2022, which is a higher number than the years 2020 and 2021 where between 37 and 77 were detected monthly. Similarly, he was part of the table for the issue of civil justice representing the city police.

Agent Laura Gisela Muñiz Aguirre holds a police position as she enters the Municipal Public Security Secretariat on November 17, 2017. Currently, she is attached to the Commercial and Industrial Police Sector, from where she participated in incidents on 16 February, 11 March and 20 March, in which she managed to arrest suspects for robberies at convenience stores. On 23 April they arrested a man carrying a firearm with eight live cartridges. On June 3, they detained a man who found 185 packets of marijuana in a vehicle he was driving. On 24 June, they detained three men carrying doses of marijuana, in addition to carrying a rifle-type firearm with 27 serviceable cartridges. On 6 August, they arrested two men who had two 9mm pistols loaded with live cartridges in the vehicle.

Aaron Adrian Moreno López, a police officer who entered the Municipal Secretariat of Public Security on December 18, 2014, has the rank of Second Police. Currently, he is assigned to the Canine Police (K9) sector, which is why he has carried out several interventions during this year.

Moreno López participated in 12 separate events in which he made arrests for crimes against health, as well as arresting three people who had arrest warrants, impounding four vehicles with stolen reports, one with superimposed license plates Violence to a vehicle, and an arrest. familiar. On 10 April, he arrested a man who had attacked a business shortly before. On April 29, they detained a man carrying a 380-caliber pistol-type firearm with four live cartridges moments before he heard gunshots. On 5 August, they arrested two men who were in possession of over a thousand fentanyl pills. On 6 October, they arrested a man with 22 doses of methamphetamine.

Agent Alexa Gisele Reyes Rodríguez, who entered the Municipal Public Security Secretariat on September 2, 2021, has the rank of Second Police. Presently, it is attached to the canine police sector.

Reyes Rodríguez arrested on August 7 a man armed with a knife who had committed a robbery shortly before. On September 17, he arrested a man with 180 wrappers of cocaine. On 31 July, 20 August, 24 September and 21 October they detained various people who had arrest warrants. On October 28 and November 2, in separate events, they arrested two men with methamphetamine, also known as crystal, and on August 12, 2022, a day after the so-called “Black Thursday”, they Also participated in combating violence. In which 6 people have been arrested.

Artemio Hernández Trujillo, a policeman who joined the Municipal Secretariat of Public Security on October 1, 2008, has the rank of first policeman. He has performed various functions in the Corporation as a mentor, in the Delta Response Group and within the Academy, where he has served as Instructor, Head Instructor and currently serves as Academic Coordinator.

Hernandez Trujillo has completed 53 courses, certifications and updates, received 11 awards, including an award for “Teaching Merit” and has been instrumental in the training of officers graduating from the Police Academy.