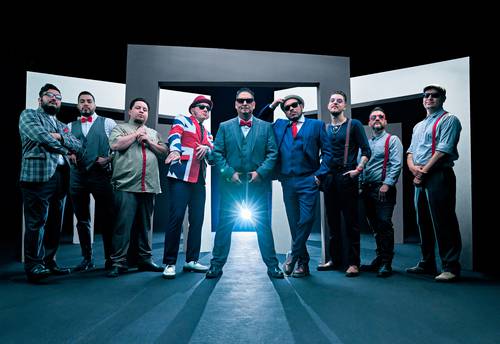 For nearly 30 years, Inspector has “faithfully” carried the ska flag both in Mexico and abroad, thanks to a genre “that continues to gain territory and is in great health.”

jesus arriaga, Godfatherwho is a saxophonist from Monterrey and a founding member of the group, told conference About the first performance of his “long” career, which will take place on February 24 at the National Auditorium, where he will celebrate 20 years of his most iconic album soul on fire, They are also preparing for the release of the single even if it’s not with meA new version, one that fits “as a suit,” will hit the platform on January 26.

Arriaga explained: “After the pandemic we created new challenges and we realized that we needed to build our own national auditorium; In the trajectory and path the band had, it was something that was naturally going to happen sooner or later, but it would happen with a lot of partying, dancing and emotion”.

The health emergency also disrupted the 25-year celebrations; “Also, the 20th anniversary of soul on fireiconic album with songs like amnesia, bitter goodbye, monkey face hey like a sun, which became a classic; It was awarded as a Latin album of the year. Two decades of it were served at the table as an excuse to go back and celebrate, but – really – we’re always celebrating our careers.

The history of Inspector began in 1995 in Monterrey, Nuevo Leon, shaking hands with intense songs of love and heartbreak, fierce themes, a deep voice and lots of rhythm where partying, dancing and Feeling came together. in different countries.

Jesus with the slogan “To have fun and make music” Godfather Arriaga brought together a group of friends to give shape and life to a musical project whose rhythmic basis was ska. That’s how he started playing with punk and hardcore bands within the scene. underground Local, managing to open a venue to their music and the public’s rapid acceptance.

Their first recorded work was released in 1998 under the title black and whitewhich won them the award for Best New Band awarded by the magazine our rock, In 2001, he released his second study material, soul on fire, with the independent label MXM where he mixed ska with rhythms such as jazz, swing and reggae. Universal Music signed them, they re-released that album and sold over 300,000 copies, becoming a platinum record.

Already on its way to independence, the group presented ska a la carte in 2012, where he made several remakes. the first cut of this material was i am falling in love, a song that became famous in the eighties thanks to the Tex Mex group, La Mafia. There was also a collaboration with Tony Hernandez (El Gran Silencio) on the song. sleepy bear or band voodoo glow skull inkeep in mind! Later, in 2015, he presented retroacoustic inspectionA semi-acoustic concert with classical songs from their repertoire.

In 2018 they launched blank pages, Two years later, he uploaded his content black and white Spotify and, in 2021, they release albums A2Í 5Uena! Inspector Vol. 1 why Vol.2,

Now, for Arriaga, it is important to return to Mexico City, because “it is one of the places that has given us the most; It has been our companion and adopted us in those first trips we made, such as the Ciudad Universitaria or the Alicia Multiforum, among other places that we have made our own, also to the rhythm of ska. Now reaching the National Auditorium is a way of reaching the pinnacle of our career.

Padrino recalled that in its beginnings the group played “open spaces; Maybe they criticized us because there were other bands that appeared on television or radio and there was a kind of rejection, which we later understood was part of a band’s evolution, but now millions of people who listen to The Inspector gave us that. Give us the thermometer so that we can continue to do well.”

He said: “We have a huge commitment to our people and our gratitude is eternal, as they have made us a long-standing band, as it is not so common anymore to talk about groups that have been around for 27 years or so. can celebrate.” reach almost three decades.”

He is the key to their durability Godfather, “There were songs; We’ve found a formula for composition and interpretation that resonates with masses and subjects that are timeless. This allows the songs to be shared with different generations, there are also new audiences who are discovering Inspector, either through their parents, uncles or simply by searching and finding content on social networks or digital platforms. in the immediacy of doing, which allows the songs to be taken to more ears”.

As of now, Inspector has over three and a half million monthly listeners on the Spotify platform and will set the National Auditorium reverberating with its signature and original beats for over two hours on 24th February. “2023 looks to be the year to reconnect with the work we had before the pandemic,” he said.