SLP and EU will work together on security: Ricardo Gallardo 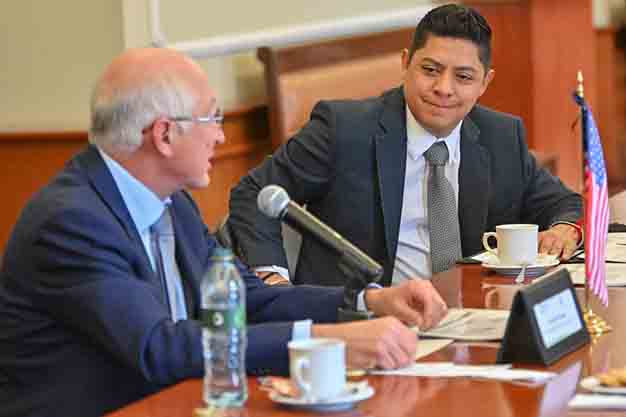 As part of the results of a meeting between the state’s governor, Ricardo Gallardo Cardona, and United States ambassador Kenneth Lee Salazar, the American politician promised to work closely with the new state government in matters of public safety, announced the state. head of the executive committee.

He stressed that figures from the National Security System’s Executive Secretariat, which show a decrease of up to 33 percent in intentional killings in San Luis Potosí, were of interest to US Ambassador Ken Lee Salazar, who would “support the San Luis State Civil. Potosi concerning the intelligence and training of the Guard”.

During his visit to the state, the American politician recognized San Luis Potosí as one of the safest states in Mexico and highlighted the leadership of the new state government on the issue of security due to the creation of the State Civil Guard.

Regarding acts of insecurity registered in neighboring states of San Luis Potosi, he said that, since the beginning of the administration, San Luis Potosi has been shielded to avoid the “cockroach effect”, a preventive measure he recalled. As in, safety filters were installed in the entryways of the unit.

He regretted that the people of Potosí had been used for the criminal acts that were recorded during the governments of the “damn legacy”, as well as the lack of actions to avoid, for which he sought to strengthen the security strategy. and backed its commitment to continue. Protecting San Luis Potosí to enhance the peace and tranquility that citizens deserve.