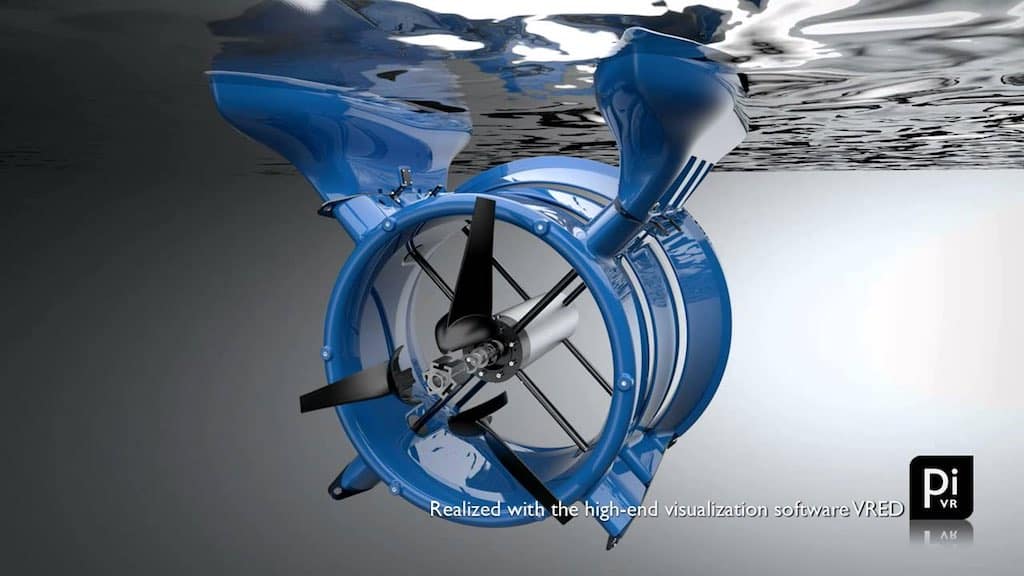 This hydraulic turbine works like a wind turbine, but instead of taking advantage of the force of the wind, it uses the movement of water. What makes it special is its ease of installation.

Hydropower has minimal CO2 emissions2, You can be sure of continuous generation of power 24×7 (24 hours a day, 7 days a week) unlike intermittent sources like wind or solar.

Smart hydro power tidal turbines can contribute to the development of hydropower. The device can work even in a 2 meter wide channel and will not pose any threat to aquatic organisms.

How does smart hydro power work?

This turbine is designed for rivers or canals, each with a minimum depth and width of 2 meters.

It has three blades of one meter diameter. Coupled with an electrical generator, the turbine is driven by the movement of the water. The system is designed in such a way that the velocity of water increases as it passes through the device. This optimizes production, the technology being further enhanced by the curved shape of the blade. According to the manufacturer, the turbine is based on the principle of a wind turbine, except that everything happens under water.

The device does not require the installation of large infrastructure such as a dam. It only needs to be anchored to the mooring block on the bottom of the water or on the shore. The anchoring system will depend on a number of conditions. The most important thing is to determine the nature of the river bed (rocks, sand, etc.). You also need to take into account the possible traffic on the river or canal. In addition to being easy to install, the system provides effective protection against possible floating debris that could clog the device.

On average, a turbine will generate about 8,500 kWh per year. This will meet the primary energy needs of 30 houses. However, production varies depending on the depth of the river and the speed of the water flow. The higher the speed of water flow, the more energy will be supplied. It should be noted that the hydraulic installation can be expanded by adding more turbines to increase output.

How does a tidal power turbine work

A tidal power turbine is a device that converts the kinetic energy of water into electrical energy. It works similarly to a hydroelectric turbine, harnessing the energy of moving water to generate electricity.

There are many designs of tidal turbines, but in general they work by means of a rotor with blades that are driven by the movement of water, waves, or tides. The rotor is connected to an electric generator, which converts mechanical energy into electrical energy. Electrical power is stored in batteries or sent directly to the local power grid.

One of the advantages of tidal turbines is that they are a renewable and sustainable form of energy, as they do not emit carbon dioxide or pollute the air. However, there are also disadvantages, such as the potential for harm to marine life or the difficulty of maintenance in an aggressive marine environment.

If you liked this article, share it with your friends on social networks. Thanks!