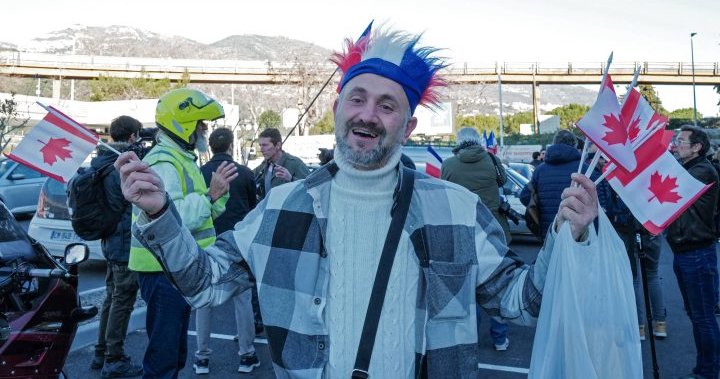 The so-called “Freedom Convoy” protest movement against COVID-19 vaccine mandates that has paralyzed the Canadian capital and spilled over to key Canada-US border crossings has gained global momentum, with similar demonstrations popping up in other parts of the world.

Since Jan. 28, a convoy of vehicles, mostly trucks, has been parked around Parliament Hill, disrupting traffic in Ottawa’s downtown core.

Many in the hundreds of vehicles have vowed to stay until all COVID-19 restrictions, including mask and vaccination mandates, are lifted.

As the Canadian truckers — many with families and children — continue to clog Ottawa’s streets, anti-vaccine mandate protests in several other countries have also picked up steam.

Kerry Bowman, a professor of bioethics and global health at the University of Toronto, said the Canadian trucker protest resonates with people around the world.

However, he is concerned about how the movement is portraying Canada on the global stage and the impact this could potentially have on the COVID-19 pandemic response.

“What I worry about is it will erode the … the acceptance of public health intervention in the future if in fact the pandemic continues or …. if we have another pandemic someday within our lifetime,” Bowman said.

Where are protests being held?

Inspired by the Canadian truckers, French protesters set out from southern France on Wednesday in what they call a “freedom convoy” that will converge on Paris and Brussels — headquarters of the European Union — to demand an end to COVID-19 restrictions.

About 200 protesters assembled in a parking lot on France’s Mediterranean coast, with many displaying Canadian flags in a nod to the truckers in Canada.

The protesters in Nice said they are demanding, among other things, the scrapping of rules barring people from public venues if they do not have a COVID-19 vaccination.

Not all of the people setting out from Nice planned to travel all the way to Paris or Brussels. The convoy was made up of motorcycles and private cars, but no trucks.

In the city of Perpignan, near France’s border with Spain, around 200 people gathered to set off towards Paris as part of the “freedom convoy” movement.

Their convoy was made up of cars, some camper vans, and one heavy-goods vehicle.

In the Australian capital, the “Convoy to Canberra” rally against mandatory COVID-19 vaccinations has attracted attracted from across the country. Over the past week, hundreds of cars and trucks have blocked roads and targeted businesses in the city.

Meanwhile, in Wellington, New Zealand, more than 1,000 people driving cars and trucks from around the country converged on Parliament Tuesday to protest against COVID-19 mandates.

Among the protestors’ grievances is the requirement in New Zealand that certain workers get vaccinated against COVID-19, including teachers, doctors, nurses, police and military personnel.

By Thursday, the number of protesters had dwindled to a couple of hundred.

New Zealand police said in a statement they have arrested more than 50 people who face charges including trespassing and obstruction, and will be bailed to appear in court.

Across the border in the United States, an American version of Canada’s trucker convoy is planning a similar demonstration against COVID-19 mandates.

Organizers of the “The People’s Convoy” plan to kickstart their protest from Coachella Valley in Indio, Cali., on Mar. 4 and head towards Washington, DC

“Our brothers and sisters of the highway succeeded in opening Canadian’s eyes about the unconstitutional mandates and hardships forced onto their people and now it’s time for the citizens of the United States of America to unite and demand restoration of our constitutional right,” a statement posted on the group’s Facebook page said on Wednesday.

Caroline Orr Bueno, a disinformation researcher at the University of Maryland, said subtle forms of influence online that can have a “snowball effect” should not be overlooked.

“I think we will continue to see attempts to plant that seed in people’s minds to see if they can mobilize somebody to do something,” she told Global News.

“Once one person gets that ball rolling, then those same people who goaded them will be right there to help them along the way and make that snowball grow a lot faster.”

— with files from Jackson Proskow, Reuters, the Associated Press