Solar incentives in US states: Michigan 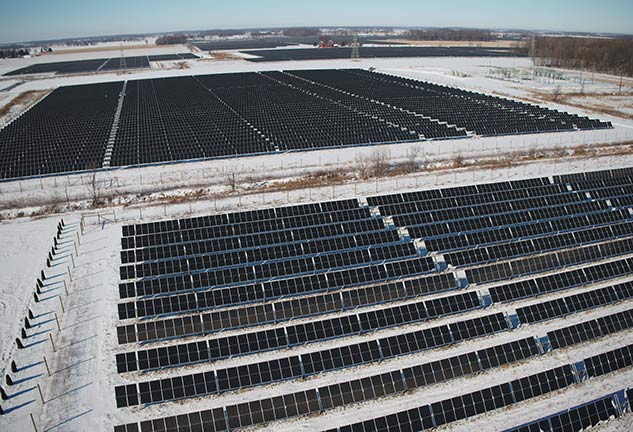 Michigan, the Great Lakes state, is located in the upper Midwest and ranks 10th by population and 11th by land area. It is known as the automobile manufacturing center of the United States, with three major automobile companies located in the Detroit area.

Last spring, Michigan Governor Gretchen Whitmer announced the Michigan Healthy Climate Plan, which calls for the state to reach 60% renewable energy resources and build infrastructure to accommodate millions of electric vehicles by 2030. The plan has been under development since 2020, when the governor committed Michigan to achieving economy-wide carbon neutrality by 2050. This includes an interim reduction of 28% by 2025, 52% by 2030 and maintaining net negative greenhouse gas emissions after 2050.

The governor has started carrying out the measures provided for in the plan. He promised to power all state facilities with 100% renewable energy by 2025 and attracted investment from battery and electric vehicle manufacturers, adding 21,600 jobs to the state.

Although the roadmap places the state at the forefront of renewables expectations, it currently sits right in the middle in terms of the amount of solar power installed. According to the Solar Energy Industries Association (SEIA), Michigan will drop to 25th place by 2022 with only 1 GW installed, enough to power 153,000 homes. SEIA expects the state to install another 2.4 GW in the next five years.

Incentives
Michigan’s renewable energy regulation requires 15% of the state’s energy use to come from renewable sources.

Net metering ended in the state in 2018, replaced by a “distributed generation program”. The program is similar to net metering in that solar users receive credit for all excess electricity they send to the grid, but only during the day. Credits vary by power company and are used to offset the power supply portion of your power bills.

“Michigan EIBC and our member companies have been working together for years to solve distributed energy resource problems for customers, such as rooftop solar and storage, as well as community solar projects in Michigan,” he added. Michigan Energy Innovation Business Council. “For rooftop solar, one of the biggest challenges is how much solar homeowners and businesses can install and the extent of those solar projects.”

This limitation presents a challenge for any customer considering installing solar power, as they cannot be sure they will be able to benefit from net metering. It’s also a deterrent for solar installers, who, because of the uncertainty, are wary of hiring new employees or expanding their businesses.

“We are working with the legislature to reintroduce bills that remove limits on rooftop solar and ensure that customers are fairly compensated for the benefits they bring to the grid,” Sherman said. .

Consumers Energy, an investor-owned utility serving more than 6 million customers in Michigan, had set a cap of 2% on total distributed generation in its area, one of the distributed energy pricing regulations. The most restrictive in the country, and was criticized by proponents of solar energy and environmentalists. In December, the company reached an agreement with the Michigan Public Service Commission (MPSC) on its 2022 rate case, pledging to double the cap from 2% to 4%. The company is now awaiting approval from the MPSC.

Last year, Bills 4715 and 4716 were introduced to the legislature, which – if approved – would allow the construction and financing of community solar installations and customers would receive credits for solar power produced. The bills would also include mechanisms to ensure that low-income households or service organizations can sign up for community solar power and would be asked to develop financing options, financial incentives, and education and outreach programs. The bills did not reach a vote in the previous session, but they will be reintroduced in the new legislative session in the House of Representatives and Senate in the coming weeks.

“Here at CCSA, our goal is to pass legislation, reduce red tape, and enable the creation of a community solar program that provides access to customers throughout Michigan,” said Carlo Cavallaro, Midwest Regional Director of the Solar Access Coalition Communities . “If the law is not passed, customers will not be able to access community solar power.”

Michigan EIBC also sees value in community solar power. “It is critical that these projects be driven by the communities and generate the greatest benefits for those communities,” Sherman said. “Michigan is working with EIBC partners to reintroduce legislation that creates a legal framework for community solar projects and ensures that all Michiganders can access the benefits of renewable energy.”

solar loan
Michigan Saves is a non-profit green bank that provides low-interest loans to homeowners or businesses that want to go solar or electric. The program aims to provide $1 billion in clean energy financing by the end of this year, and includes assistance for low- and middle-income people.

cut rate hike
Last February, Michigan power company DTE Energy proposed new rates for potential residential solar customers that would discourage people from going solar. But the Michigan Public Utilities Commission announced it rejected the plan. This came as part of a November 2022 decision that rejected the utility’s proposal for a $388 million increase, instead approving a $30.5 million increase. The full sentence can be consulted here.

Symbol Features
The Solar Assembly project is the largest solar installation ever completed in the state of Michigan. Built in three phases, the third and final one came online early last year. Shiawassee County has a total of 485 hectares with 346.9 MWdc of solar capacity. This includes 800,000 longi bifacial solar modules on NextTracker trackers. The project has been developed by Chicago-based commercial-scale solar developer Ranger Power in association with DE Shaw Renewable Investments.

The impressive assembly plant will soon be replaced as the largest in the state. Ford Motor Company announced through MIGreenPower, a clean energy program managed by DTE, that it will add 650 MW of new solar power to its headquarters. The company claimed that by 2025 all of its Michigan-built vehicles would be assembled on the equivalent of 100% carbon-free electricity.