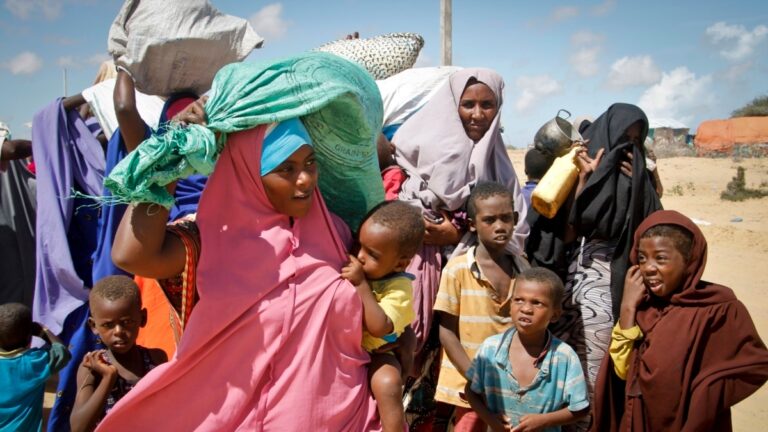 Somalia’s worst drought in decades has left millions dependent on food aid and thousands of people fleeing hunger for cities. In temporary shelters on the outskirts of the capital, displaced people face cramped conditions and poor sanitation amid the COVID-19 pandemic.

Villagers in Somalia are daily arriving at camps for internally displaced people on the outskirts of the capital Mogadishu to survive the drought.

At Najah Camp, a 45-year-old mother of four Muhubo Adam is cooking food for her family. They fled his village in Lower Shabele, some 90 km away, last week.

She said they had to leave because two seasons had not rained and the drought had devastated livestock and farms. Adam said he spent the entire day trekking to get to the camp.

But the situation is also difficult in the crowded camp. Despite the coronavirus pandemic, no one is wearing a mask, there is no room for social distancing, and hygiene is poor.

Fifty-six-year-old Noor Hasan Ali looks much older than his age and appears weak as he slowly moves through the makeshift tent of the camp.

He and his six-member family also ran away from hunger in their village last week, but are not doing much better near the city.

Ali said that his livestock started dying due to the long drought, so he had to run away with his children and finally reach the camp. But now here, she said, they have nothing, and her children are hungry and she has nothing. Ali said that he too was ill.

District officials entrusted Faisa Umar to keep an eye on the newcomers to the camp.

He said the Najah camp is home to 370 families who have been displaced by the recent drought and whose livestock have been wiped out. Umar said that he is not getting any help from the government or aid agencies. She said they lack shelter from the sun, cold and rain.

But it is the lack of rain back home that forced villagers to flock to Mogadishu.

This is putting pressure on the city’s health care system, which was struggling even before the pandemic, said Dr. Abdirizak Yusuf, director of Martino Hospital.

He said the drought has come at a time when they are grappling with the burden of recurrence of COVID-19.

Yusuf said the drought has further burdened the already existing COVID-19 problem, causing illness and death. He said that drought is creating its own pain and misery as it also spreads disease.

The government and UN aid agencies have warned that millions of people in Somalia are in urgent need of food aid.

Officials say thousands of refugees living in camps near Mogadishu are also vulnerable to diseases caused by poor sanitation, overcrowding and dirty water.