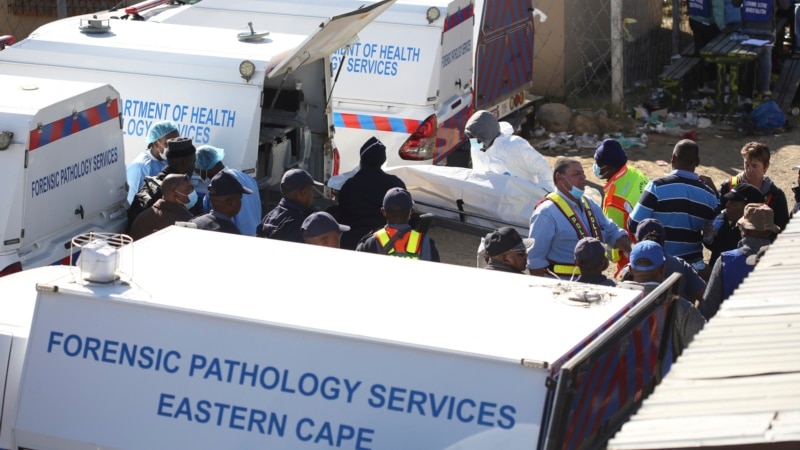 South African authorities say the owner of a bar where at least 17 teenagers were found dead and four others died while receiving medical care is expected to be charged. Police investigating the mysterious deaths in the Eastern Cape say they have not ruled out the possibility that the teenagers were poisoned.

South African police say they are investigating and awaiting autopsy results after the teens’ bodies were found at a bar early Sunday morning with no apparent cause of death.

“While we understand the urgency of this matter and the anxiety of the public, especially the affected families who want answers. We urge us to allow enough time for our detectives to finalize those investigations. I must also add that we have not made any arrests at this stage, “he said.

South African police say the owner is expected to be charged and did not rule out the possibility that the teenagers were poisoned.

Kinana spokesman said half a dozen of the bodies were not immediately claimed.

“We appeal to parents or family who may not have seen their children since last weekend to please make time to make inquiries. “We also appeal to parents whose children who may have survived the tavern incident but still feel ill to please visit hospitals and clinics for medical examinations,” he said.

Police were called to East London’s Enyobeni Tavern in the Eastern Cape province, where local media reported that the bodies had been found collapsed on the floor and tables.

The owner of the tavern, Siyakhangela Ndevu, told AFP news agency customers were trying to force the bar inside despite it already being packed.

But security authorities were quick to rule out a rush due to the lack of injuries to the bodies, some as young as 13 years old.

Eighteen is the legal drinking age in South Africa.

“The owner had workers who worked there, he had bouncers, they could have seen, easily seen that there were minors in that business. But it was allowed to happen, the owner put the profits in front of the people. He should never trade in alcohol in his life. “The license must be revoked with immediate effect,” he said.

Read Also:  Chile and Spain will be

South Africa’s President Cyril Ramaphosa has expressed condolences to the families through his spokesperson, Vincent Magwenya.

“While the president is waiting for more information about the incident, his thoughts are with the families who have lost children. However, the president is also concerned about the reported circumstances under which such young people were gathered at a venue that on the face of it should be out of bounds for people under the age of 18. “The president expects the law to take its course after investigations into the tragedy,” he said.

He added that the deaths were even more tragic as they happened during South Africa’s youth month.

Youth Month developed from the National Youth Day of 16 June when South Africa reflected on the massacre of students during the 1976 Soweto uprising against apartheid.

Some of the deceased were also students who celebrated the end of the half-year examination.