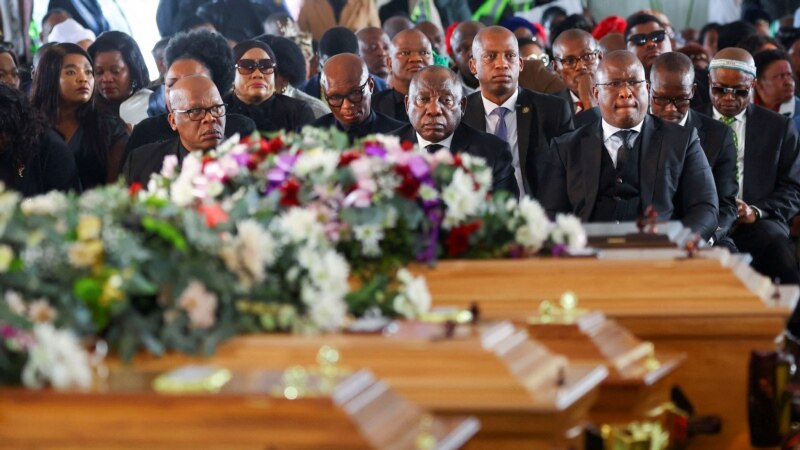 In the wake of two weekend tavern shootings in South Africa that left 19 dead, communities are wondering what should be done.

In an informal settlement in Soweto, a Johannesburg township, hundreds of people are trying to make sense of the brutal murder of 15 people in a tavern this weekend.

Mass murders are rare in South Africa, although gun violence is not.

Tim Thema, a leader in the informal settlement, said there have been multiple deadly shootings in the area over the past year.

“Everyone has a gun in Soweto,” he said. “Whether you’re a foreign citizen, you’re a citizen of this country, they all have guns and you wonder, what kind of country is this? We can’t live in a society where everyone has guns and does whatever they please.”

This weekend’s violence was not isolated.

Four other people were killed by gunmen in Pietermaritzburg, a city in the eastern province of KwaZulu-Natal.

Although two people have been arrested in connection with that shooting, the assailants in the Soweto tragedy remain at large.

Read Also:  Today's Panchang: What happened on 16th August | Events in Argentina and the world

Government authorities said the events are not linked.

“It was about 130-plus empty AK-47 cartridges, which means the people that were there were really serious about killing,” Cele said. “We do not believe it was terrorism. So, it’s a group of people that we think we’ll understand why as soon as we find them.”

Overall, crime has been on the rise in the country.

The first quarter of this year saw more than 6,000 murders, the highest rate for any quarter in the last five years, according to police statistics.

Crime experts say gun control campaigns in the 1990s and early 2000s to seize and destroy illegal weapons resulted in a decline in violence.

But in the last decade, progress has been reversed.

Lizette Lancaster is the manager of the crime center at the Institute for Security Studies in Pretoria.

“We have seen problems in policing and law enforcement where corruption has become quite common, especially in places like the central firearms registries, where the destruction of firearms was not done, or often took place. result in the weapons being sold back into the hands of criminals,” he said. .

Lancaster said there are signs of improvement, with anti-corruption efforts attracting new and more qualified people into leadership positions in law enforcement.

But reducing gun violence isn’t just about policing, he added. The country’s socioeconomic issues should also be a priority.

“Poverty does not make you a criminal. There have to be other factors. And the growing inequality is one of that, but also the proliferation of these organized groups is fueling the fire simply by having more people willing to participate in organized crime in order to feed their family.”