Sports Media: For NLL, remote production is a game changer The National Lacross League moved to mostly remote production at the start of its deals with ESPN and TSN.NLL

Joil feld is the image of a traditional media executive.

The National Lacrosse League’s executive vice president of broadcast and content learned his trade from the good ol’ television business with stints at ABC Sports, CSTV, NESN and One World Sports,

But Feld realized that he needed more than his own linear television background to help his league, which has just started a new contract with ESPN and TSN,

In November 2020, Feld brought on Ed Derse as a broadcast operations and technology consultant to work out a plan to develop the league’s own remote production strategy for games that would appear both on linear television and streaming services.

For Feld, who’s used to pulling up a production truck outside the stadium and having everybody on-site, the move to remote productions can be best described as a leap of faith.

“My fellow producer colleagues would probably shiver when I say this, but TV can be produced much more effectively and much more efficiently than sending hundreds of people on-site to produce games,” Feld said. “It takes a little bit of guts, a lot of homework, and a belief that the new technologies that are out there are things that you should take advantage of.”

Going into the pandemic, the league’s teams were responsible for producing their own games that would appear on Turner‘s BR/Live, This resulted in a huge difference in production quality; some teams produced at a high level, and some didn’t.

With the new ESPN and TSN deals, Feld decided that the league’s game productions needed a more centralized approach. He wanted the league office to control most of the productions — 10 of the league’s 14 teams are letting the NLL produce their games remotely. Not only does that save a lot of money, but it creates a similar level of quality across the league.

The story about the increase in local productions has been a dominant trend in the business over the past two years. 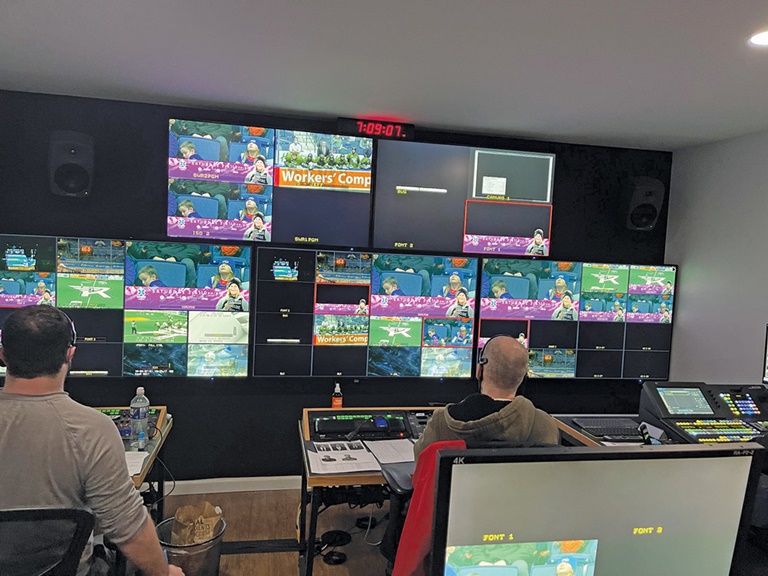 The change gives a similar level of production quality throughout the league.NLL

Since the early days of the pandemic, every network has saved a lot of money by producing games from its network headquarters, as opposed to sending a crew to produce games on-site.

Smaller sports leagues — the ones responsible for producing their own games — have taken notice and are leaning into remote productions even more than their bigger media counterparts.

“We’re a small league that has gone big in broadcasting,” said Feld, who joined the NLL in 2017.

Essentially, the NLL’s remote production plan blends cloud-based technologies with IP transmissions, which allows the league to produce games remotely at a fraction of the cost than the networks have been paying, Feld said.

“That allows us to broadcast really super-high-quality productions to both our national partners and to our local takers simultaneously,” Feld said. “We don’t have hundreds of millions of dollars to spend. We needed to find a cost-effective way to be able to distribute all of these games to ESPN and TSN.”

The league is responsible for producing and distributing 126 regular-season and playoff games, most of which are played on Friday and Saturday nights. TSN, which produces its games in Canada, still rolls trucks to its stadiums, and the league uses trucks for a handful of ESPN games in the US, though much of the programming for ESPN’s linear channels is produced remotely.

“Budgets no longer support spending $50,000 to $75,000 on producing, say, a mid-tier college basketball game,” Derse said. “How do we produce at a high level at costs that merit the economics of the situation? That’s really the problem that we’ve been trying to solve from Day 1.”

Both Feld and Derse acknowledged the risks associated with producing games with few people on-site. They both pointed to NFL playoff games — the epitome of big productions — that experienced some production hiccups. One network lost its score bug for several plays during a conference championship game. Another experienced significant audio problems during a studio show.

“We like to think that the networks are taking a page out of what leagues like ours are doing,” Feld said. “The business side is that we can’t continue to spend like drunken sailors every year, particularly as rights continue to go up, and their production people are being challenged to find more effective and efficient ways to produce games at the same high quality .

Still, Feld recalled having butterflies in his stomach during the first game that he produced remotely — a December matchup between Vancouver and San Diego, which caused Feld to travel from Los Angeles to Salt Lake City to produce a game being played in San Diego.

The league produced the game from Dragonfly Media Technologies in Salt Lake City.

“We both held our breath,” Feld recalled.

It went without a hitch.

John Ourand can be reached at [email protected] Follow him on Twitter @Ourand_SBJ and read his weekly newsletter.