After two years of subdued celebrations, St. Patrick’s Day parties in Waterloo made a major comeback on Thursday.

In anticipation of large crowds gathering on Ezra Avenue – the site of unsanctioned student parties during pre-pandemic St. Patrick’s Days – the City of Waterloo installed fencing along the road on Monday.

On Thursday, students moved the party a block away to Marshall Street.

Officials haven’t provided an estimated crowd size, but at its peak there appeared to be thousands of partiers in the area.

“They closed off Ezra so we just came over here,” one said.

HOW THE DAY UNFOLDED

Thursday morning started off quiet with groups of students walking from party to party, but by early afternoon, the festivities were spilling out onto the street as crowds continued to swell.

The party has started, SPD in Waterloo, the party is moving to Marshall street this year, students I spoke say they are hoping for an Ezra’esque experience but suspect it will be more spread out, plent of police patrolling @CTVKitchener pic.twitter.com/8KjGADty3i

“It’s kind of liberating, in a way, to know that we’re getting back to the student lifestyle,” one person taking part in festivities said.

There was also a heavy police presence in the area. In a tweet, the Waterloo regional police encouraged those partying to gather in smaller groups, at licensed establishments or at home.

Officers handed out some tickets, but said there hadn’t been any major incidents during the day on Thursday.

Streets had started to clear around 3 pm, but it was anticipated students could return again on Thursday night. 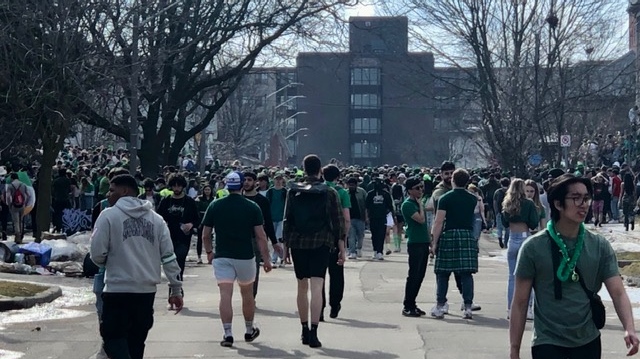 Some people in the area weren’t pleased to see the partying.

“I think this is disgusting,” one woman said. “People are in their cars, they’ve got appointments. All the kids are all over the road and they’re charging for the drinks. They knew this was going to happen, get them the hell out of the way so we can get through.”

Regional police posted a message from Chief Bryan Larkin Thursday morning saying “they will continue to work closely with our community and emergency service partners to ensure complete and extensive operational plan is in place throughout the next 24 hours.”

Happy St. Patrick’s Day! If you plan to celebrate, please do so in smaller gatherings, at licensed establishments, or at home.

Our top priority is ensuring your safety and the safety of the entire Waterloo Region community.

The University of Waterloo sent out a tweet reminding students to watch out for each other, encouraging them to eat and drink with friends on campus or a local pub or restaurant.

Laurier actively discourages unsanctioned street gatherings. We strongly encourage our students to make smart choices and engage in safe and respectful behaviours. Look out for each other and make smart choices. pic.twitter.com/MdOQLYv0nm

Uptown Waterloo has made a map of pubs and restaurants open for St. Patrick’s Day: