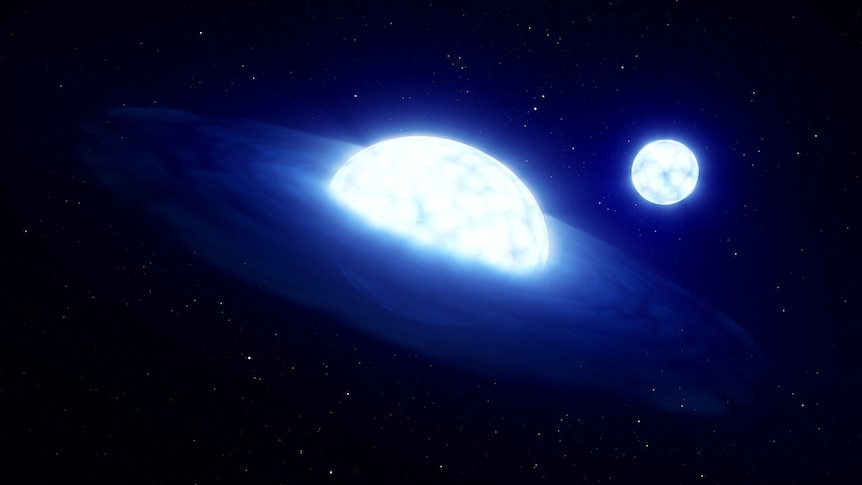 Astronomers have gotten a good look at what happens when a “vampire” star sucks the outer layers of material from a companion star, stripping its “bitten” victim down to a mere stellar core.

They found that the system’s two companion stars were not accompanied by a black hole as was previously proposed.

The two stars instead exist as a binary system, gravitationally married in an orbit lasting about 40 days.

While binary systems are common, what makes this one unique is that it has provided a rare glimpse of the immediate aftermath of what is dubbed “stellar vampirism”.

“What we mean by stellar vampirism is that one star has sucked the outer material off of another star,” said astronomer Abigail Frost of KU Leuven in Belgium.

She is the lead author of the research published in the journal Astronomy & Astrophysics.

“This can be done if the stars travel close enough to each other and the gravitational pull of one star pulls material off the other star,” Dr Frost said.

Stars slowly grow as they age.

Those in binary systems with two orbiting closely, as in this case, can grow in size beyond a threshold at which their gravity can protect them from the tug of the companion.

So it is the star that grows more quickly that falls victim to vampirism.

“When this is done, the inner areas of the star that’s been ‘bitten’ can be exposed, showing signatures of elements that we otherwise wouldn’t be easy to see,” Dr Frost said.

This binary system is located roughly 1,000 light years — the distance light travels in a year, 9.5 trillion kilometers — from Earth.

The system has two B-type stars, which are large, very hot, very bright and blueish in colour.

By way of comparison, our Sun is a G-type star, less hot and smaller than its B-type counterparts.

The rapid spin observed in the “vampire” star may have been caused by material from the other star that previously crashed into its surface.

The “vampire” also now has a disc of material around it. The stars orbit quite close to each other — a third of the distance separating Earth and the Sun — though not as close as some binary stars.

The current mass of the “vampire” star is roughly four to five times that of the Sun.

The other star’s mass, originally perhaps five to six times the Sun’s mass, now may be less than one solar mass.

With vampirism, most of the outer material sucked from the bigger star ends up incorporated into the thirsty companion.

“Since these outer layers have not been touched by the nuclear burning in the center of the original star, this material is ‘fresh,'” said ESO astronomer Thomas Rivinius, who was a co-author in the study.

“And so the other aspect of ‘vampirism’ is that this supply of fresh hydrogen does actually ‘rejuvenate’ the star receiving it, making it appear more blue [hotter] than it should be for its age.”