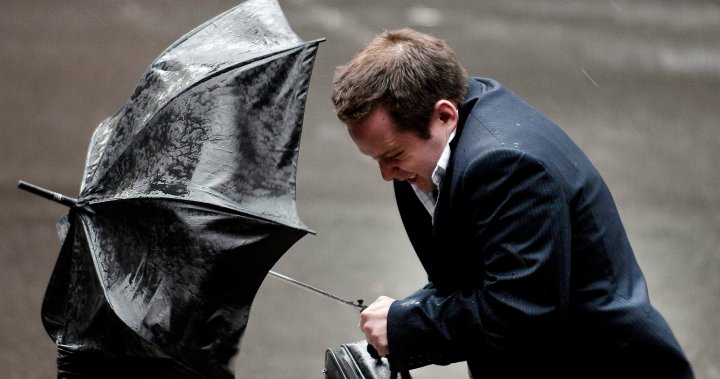 A storm is set to hit BC starting Tuesday night, bringing it with strong rain, winds and snow.

“Our La Nina-driven weather just keeps on coming,” meteorologist Kristi Gordon said. “Wednesday’s low-pressure system is not typical for this time of year. Temperatures will be six degrees below seasonal across all of Southern BC Snow is expected to fall in the mountains as freezing levels drop to 1,100 to 1,500 meters.”

Environment Canada has issued special weather statements for the region

The agency says strong winds and heavy rain will hit Metro Vancouver, strong winds will hit north and west Vancouver Island and snow is expected to fall on Highway 3 from Hope to Princeton via Allison Pass and on the Coquihalla Highway from Hope to Merritt.

Gordon said snow being added to the mountains this time of year could be both good news and bad news for British Columbians.

“A healthy snowpack could mean ample water for the reservoirs throughout the summer months,” she said. “However, if our spring weather takes a drastic turn to extremely hot conditions, the added snow will exacerbate the potential for flooding.”

Strong winds are expected to blow over Vancouver Island, the Sunshine Coast, Howe Sound, Whistler, the Lower Mainland and the Fraser Valley.

Those winds will switch to a southwest direction on Wednesday, according to Environment Canada.

Between 40 and 60 millimeters of precipitation is also expected to fall on west Vancouver Island and the higher terrain of the Sunshine Coast, Howe Sound and the North Shore Mountains.

Read Also:  Brrr! It was so cold in Florida, iguanas fell from trees

Winds across west, east and north Vancouver Island, along with Greater Victoria, the Southern Gulf Islands and the Sunshine Coast could reach between 70 and 100 km/h by Wednesday.

For the higher elevation passes, snowfall amounts near five to 10 centimeters are possible, according to Environment Canada.

Drivers are urged to check DriveBC before heading out the door.

‘Very stressful’: Cold weather delays crops for many BC farmers, but no relief in sight

“It is also important to note, while many British Columbians would like the weather to improve, there are benefits to cool, wet conditions continuing into the summer,” Gordon added. “The wildfire season could be less severe and cooler streams are better for the salmon population.

“Currently, there is a 59 per cent chance La Nina conditions (cool, wet weather) will continue into summer.”