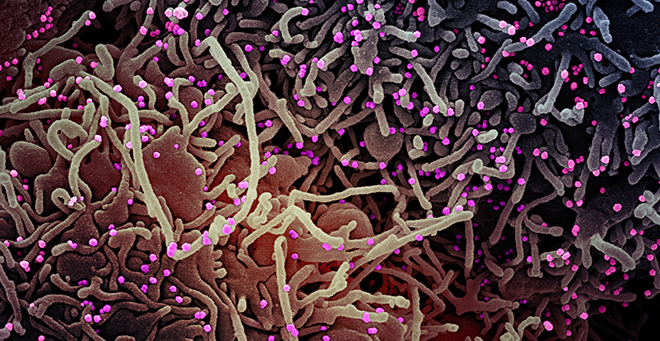 Wide variation in the amount or infectivity of SARS-CoV-2 in people in the early stages of COVID-19 could be one explanation for the phenomenon of “super spreaders”, according to a study by UMass Chan researchers and colleagues from several institutions. recently published in Nature Microbiology ,

Nasal and saliva samples were obtained from 60 people at the University of Illinois at Urbana-Champaign in late 2020 to early 2021 who were asymptomatic or mildly symptomatic for COVID-19. Participants had either received a new positive PCR result in the last 24 hours or had come in contact with someone with COVID-19 within the past five days. The study was supported by the Rapid Acceleration of Diagnostics (RADX) initiative of the National Institutes of Health.

The term super spreader refers to an infected individual who contributes to a large, disproportionate portion of SARS-CoV-2 transmission.

“Until this study, the reason why some people transmit the virus more widely than others was not well explained,” said co-author Laura L. Gibson, MD, associate professor of medicine at UMass Chan. Dr. Gibson was formerly co-leader of the RADX Clinical Studies Core with David D. McManus, MD. Richard M. in Medicine. Haddock Professor and president and professor of medicine.

Based on the results of the study, Gibson said, COVID-19 appears to be like most other infectious diseases in that some people get sick and some people don’t get the same infection. This clinical variability depends on several factors, including differences between pathogens, individual differences in immune responses, or even the location of the virus in the oral or nasal cavities.

The present study was performed on individuals with no known SARS-CoV-2 immunity. They had not previously been infected, and since the study was done before widespread vaccine availability, no one had received a COVID-19 vaccination.

Read Also:  New satellite photo of little perseverance on Mars will give you all the emotions

The researchers measured the dynamics of the SARS-CoV-2 virus in several ways through daily sampling of participants for 14 days.

First, they tested nasal swabs using a sample from one nostril for a PCR test, which detects viral genetic material whether the virus is dead or alive, and for an antigen test from the other nostril, which Detects viral proteins. The PCR nasal sample was also tested in viral culture, a laboratory analysis that detects live and replicated viruses and so can spread to the next person.

“The unique aspect of this approach was to use multiple testing modalities on samples obtained on a single day and to repeat those measures daily throughout the course of SARS-CoV-2 infection,” Gibson explained.

To analyze data from these samples, the researchers used mathematical models to map the longitudinal dynamics of viral shedding based on data from PCR tests and viral culture performed during infection. The models described not only viral expansion and clearance but also patterns of viral shedding, which typically indicate infectious activity as the virus exits the body.

“The daily sampling of participants provided robust granular data for this modeling,” Gibson said. “We found that individuals differ significantly in terms of viral infectivity, and that such diversity likely depends on human and viral factors and supports the idea of ​​super spreaders.”

The researchers compared PCR test results in saliva and nasal samples and found surprising differences between the two anatomical locations, even though they were connected at the back of the throat. “We found the virus in saliva at least one day before nasal samples in about 85 percent of participants,” Gibson said.

The paper’s authors did not suggest that the saliva test was better than the nasal test, “but it does support the argument that if you want to detect infected people sooner, you may be better off doing a saliva test.” There are—instead of the PCR test authorized for that use—instead of nasal samples. But there are many caveats with that approach, and people should only use diagnostic tests with the specific sample type for which they are designed. Has been done.”

Although the study took place while alpha and previous variants were circulating, Gibson said the general findings would probably still apply to other variants because the researchers did not see differences in viral dynamics based on the variants assessed in this study.

Additionally, the study found differences among participants that were not fully explained by virus test results, Gibson said. “The overall finding was that people varied in the amount or duration of virus in samples, regardless of how the virus was tested, and not all of that variation was explained by the virus’s measurements. Human factors—for example the level of SARS-CoV-2 antibodies in the nose—are potentially important and can be measured as a diagnostic tool.”

There is no problem with the slaughter of cows in slaughterhouses (legal), your milk and cheese: PETA’s new animal ‘love’

How Cheap Trick’s Rick Nielsen was almost an Aussie