Summit between Mexico, US and Canada concluded 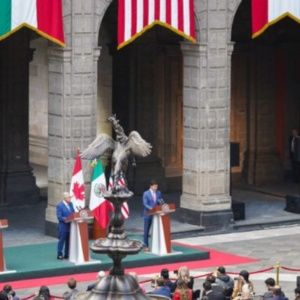 Mexico, the United States and Canada agreed to redouble their efforts to achieve greater economic integration, strengthen supply chains and mechanisms to encourage the creation of more jobs and investment.

Canada, US and Mexico reject attempted coup in Brazil

Also the leaders of the three North American countries agreed to work together against synthetic drugs, continue dialogue on the problem and seek broader global cooperation on this global threat.

action on issues of diversity, equity and inclusion; Climate change; competitiveness; Migration and Development; Health; And security was a compromise made by the leaders of North America.

In addition, the three leaders discussed in depth the immigration issue and cooperation to combat drug and people-trafficking.

The Mexican president promised to stop the smuggling of fentanyl to the United States and Canada through the work of the armed forces, which he put in charge of port and customs control, and to destroy the laboratories where the drug is made. .

“We are working on this in an organized manner, it took us to all the ports and customs controlled by the armed forces, because fentanyl and other chemicals come from Asia and these substances are processed in laboratories . We are preventing the entry of these chemicals.” and destroying laboratories,” he said.

With regard to fentanyl, Biden highlighted joint work between Mexico and the United States, noting that over the past six months, 7,000 traffickers have been arrested and 25,000 pounds (about 11,339 kilograms) of the substance have been seized at the border. Is.

“We’re going to continue our joint efforts, which include finding the precursor material (to make fentanyl), the labs where it’s made and where it’s stored,” Biden said.

Biden stressed that North America faces great challenges in achieving a resilient economy that allows for renewed cooperation mechanisms based on acting together as neighbors and friends.

Making North America the most competitive region in the 21st century is a priority by strengthening economic integration that creates more jobs in our countries, which means strengthening supply chains in the region.

In turn, the Canadian prime minister insisted that even though the trade agreement in North America had been questioned in the recent past, it was renegotiated and ended as a more robust mechanism that would strengthen economic ties. Will strengthen the supply chain in a region where 50 million people live.

He stressed that the trade agreement has attracted more investment in the sector in the past and that with the cooperation of the three countries for the future, there is an opportunity to become one of the most competitive sectors in the world. North America currently has a GDP greater than that of the European Union.