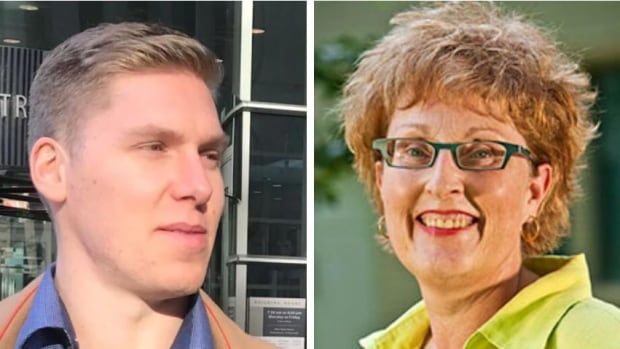 The country’s top court is set to rule on a Calgary case involving a university student who, while naked and high on mushrooms, attacked a professor with a broom handle after breaking into her home.

Former Mount Royal University student Matthew Brown was charged with break-and-enter and aggravated assault after a 2018 incident that left Janet Hamnett with broken bones in her hands.

It’s one of three cases the Supreme Court of Canada (SCC) is ruling on Friday that deal with whether the defense of extreme intoxication to the point of automatism is available to those who chose to take drugs and then end up committing acts of violence.

Two Ontario cases — known as Sullivan and Chan — were argued together and are also set to be released Friday morning as the SCC clarifies the law around non-mental disorder automatism.

In those cases, two men — David Sullivan and Thomas Chan — consumed drugs and then, in states of psychosis, stabbed family members. Sullivan injured his mother while Chan killed his father.

In his case, Brown estimated he took about 2.5 grams of magic mushrooms and drank about 12-14 ounces of vodka plus a “few beers” before attacking Hamnett in her home, where he “smashed” her hands repeatedly.

Twenty-eight years ago, Parliament made changes to the Criminal Code, prohibiting the use of self-induced intoxication defense but resulting in “not a very well-worded section,” which “has led to judges coming to different interpretations of it,” wrote University of Calgary law professor Lisa Silver in a blog post about the cases.

Silver said in her post that the SCC needed to weigh in on the law in that area because judges continued to arrive at different conclusions.

Case winds through 3 levels of court

Ahead of Brown’s 2019 trial, a Calgary judge struck down the legislation that prevents the defense being used in similar cases, paving the way for lawyer Sean Fagan to argue his client was incapable of forming the required intent to commit the crimes.

In May 2020, Brown, described by Fagan as “a good man who did something completely out of character,” was acquitted by a superior court judge following trial.

At the time, the case was believed to be the only one in Canada involving a successful defense of extreme intoxication while on magic mushrooms.

But 14 months later, the Alberta Court of Appeal overturned the acquittal, convicting Brown of aggravated assault after ruling he must bear the consequences of taking illegal drugs “in reckless disregard of the possible risks.”

Connection between intoxication and violent crime

Fagan took the case to the Supreme Court of Canada, arguing in November that the country’s top court should reinstate Brown’s acquittal.

In their 47-page factum, Fagan and co-counsel Michelle Biddulph argued Brown could not appreciate the nature and consequences of his actions and therefor should not face criminal conviction “for conduct that they were not aware of or could not control.”

“The law tells them they were responsible for this criminal conduct because they engaged in legal, commonplace activity, with no subjective or objective foresight that a state of automatism and subsequent criminal offenses could result.”

But in its fact, the prosecution pointed out there is an “indisputable” correlation between intoxication and violent crime and argued that those who take substances and then lose control “must not be rewarded with immunity from criminal prosecution.”

“One who chooses to self-intoxicate to the point of losing all conscious control and risking their life and creating a risk of injury and perhaps loss of life to other people is not engaged in morally innocent behaviour,” wrote prosecutor Deborah Alford.

The case saw nine interveners, including five attorneys general from across Canada as well as the Canadian Civil Liberties Association, the Empowerment Council and the Women’s Legal and Action Fund (LEAF).

The SCC decision will be made public at 7:45 am MT.

In 2018, Brown was a Mount Royal University student. It’s the same school where Janet Hamnett was a professor, but the connection was purely coincidental.

Brown was a student athlete, having captained the university’s hockey team for several years, and he had no prior criminal record.

One January night, he met up with friends at a home in the southwest community of Springbank Hill.

The friends were drinking and taking magic mushrooms. It was the second time Brown consumed the drug, according to his testimony. He said he’d had a positive experience the first time.

Just before 4 am, Brown’s friends noticed he was standing at the door naked. He then ran outside and disappeared into the dark neighbourhood.

Nearby, Hamnett, who lived alone, was woken up by what she described in her testimony as a “horrendous explosion” — the sound of her sliding glass door shattering.

As she got out of bed to explore, Hamnett came face to face with Brown, who then began to attack her, striking her repeatedly with a broom handle.

All of a sudden, Brown stopped and left the house. Hamnett was able to lock herself in a bathroom before running to a neighbor’s home and pounding on their door until they woke.

Hamnett was covered in blood and suffering injuries to her hands, which she’d wrapped in towels.

The neighbor called police, who eventually found Brown inside the home of another Springbank Hill resident.

When police discovered Brown, he was still naked and “screaming like an animal,” according to witness testimony.

‘Not OK to get that out of control’

At trial, psychologist Dr. Thomas Dalby testified Brown was in a state of “short-term but acute delirium” at the time of the offenses.

A doctor who specializes in forensic toxicology testified Brown had likely experienced an episode of delirium in which he was unaware of his surroundings and may have suffered delusions and hallucinations.

Brown has, on several occasions, expressed remorse and has apologized twice to Hamnett, in court and outside the courthouse after his acquittal.

But Hamnett’s family has expressed conflicted emotions about Brown.

On one hand, they didn’t feel he deserved to be “severely punished,” but on the other, Brown voluntarily took an illegal substance and should be held accountable by the justice system in some way, they say.

“It’s not OK to get that out of control and hurt people,” said Hamnett’s daughter Lara Unsworth at the time of his acquittal.

The next generation model size of Mahindra Scorpio will be bigger, powerful engine will get these special features.