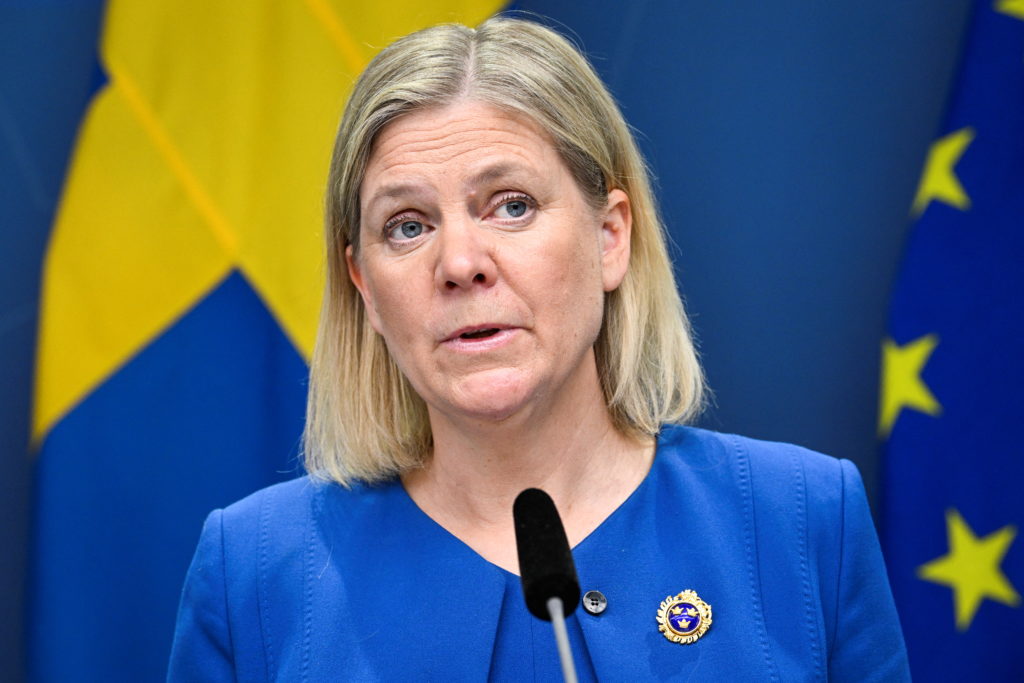 STOCKHOLM ( Associated Press) — Sweden’s prime minister announced on Monday that Sweden will join Finland in seeking NATO membership in the wake of Russia’s invasion of Ukraine, a historic change that follows more than 200 years of military nonalignment in the Nordic country. Comes.

In a move that is likely to upset Russian President Vladimir Putin’s government, neighboring Finland announced on Sunday that it too wants to join a 30-nation military alliance.

Addressing parliamentarians in the Swedish capital, Prime Minister Magdalena Andersen called it “a historic change in our country’s security policy”.

“We will inform NATO that we want to be a member of the alliance,” she said. “Sweden needs the formal security guarantees that come with membership in NATO.”

Andersen said Sweden was working closely with Finland, whose government announced on Sunday it would like to join the coalition.

The announcement came after a debate in the Riksdaggen, or parliament, before it was revealed on Monday that there is a huge support for joining NATO. Of Sweden’s eight parties, only two smaller left-wing parties opposed it.

On Sunday, the Swedish Social Democrats broke with the party’s long-standing position that Sweden should remain non-aligned, paving the way for a clear majority for NATO membership in parliament.

Public opinion in both Nordic countries was against joining NATO prior to the Russian invasion of Ukraine on 24 February, but after that support for NATO membership grew rapidly in both countries.

“The Swedish government intends to apply for NATO membership. A historic day for Sweden,” wrote Foreign Minister Ann Linde on Twitter. “With widespread support from political parties in parliament, the conclusion is that Sweden is one of the allies in NATO. Together we will stand strong.”

Once a regional military power, Sweden has avoided military alliances since the end of the Napoleonic Wars. Like Finland, it remained neutral throughout the Cold War, but became close with NATO after the 1991 Soviet collapse.

Following the Russian invasion of Ukraine, the governments of Finland and Sweden responded by initiating rapid discussions among political parties about NATO membership and reaching out to the US, UK, Germany and other NATO countries for their support.

The Kremlin, however, has repeatedly warned that the move would have destabilizing consequences for security in Europe.

Russian President Vladimir Putin said on Monday that Moscow “has no problem” with Sweden or Finland as they apply for NATO membership, but “the expansion of military infrastructure in the region will certainly bolster our response in response.” will give birth.”

In Helsinki, Senate Republican leader Mitch McConnell said Monday that Congress has “very significant” support and expects swift ratification. He said he was hopeful that polling could be held before the August holiday.

In the Swedish parliament, only the smaller Left and Green parties objected to NATO membership.

Andersen stated that Sweden would refuse nuclear weapons or permanent NATO bases on its soil – circumstances similar to those of neighboring Norway and Denmark insisted on the formation of a coalition after World War II.

Although NATO officials have expressed hope for a speedy ratification process, all 30 current NATO members must agree to see Finland and Sweden at the door. Turkey raised some objections last week, accusing both countries of supporting Kurdish terrorists and others whom Turkey considers terrorists.

Swedish Defense Minister Peter Hultquist told public broadcaster SVT that a Swedish delegation would be sent to Ankara to discuss the issue.

Jan M. Olsen in Copenhagen, Denmark contributed to this report.