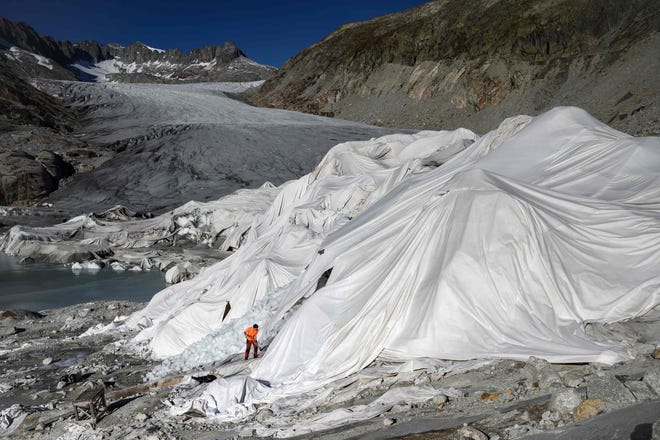 Claim: Ireland and Sweden have had no heat in January since 1988

According to NASA, the average global temperature has increased by about 2 degrees Fahrenheit since 1880. Other independent, long-term climate datasets confirm that finding.

However, some social media users have shared a blog post claiming that some countries oppose the trend.

“Ireland, Sweden shows no January warming since 1988. Antarctic sea ice has been stable for over 40 years now,” reads the title of the blog post, shared in a February 16 Facebook post.

However, the claim is misleading. This blog post cherry-picks both the time frame and the specific month, a methodology experts say is flawed. Ireland and Sweden have been warmer since 1988 if all months are taken into account.

USA Today contacted the blog author and social media users who shared the claim for comment.

Sweden, Ireland have been hot since 1988

The blog post links to data published on the agency’s “Climate View” portal, he said in an email. The portal is filled with data received through an international messaging system between meteorological agencies.

The Swedish data appears to stem from the Swedish Institute of Meteorology and Hydrology, which participates in the messaging system. While the blog analyzed data from five Swedish stations, data is available from 35 stations prior to 1988, according to Svarkar Hellström, a climatologist at the institute.

When data from these stations is analyzed, there has been no significant warming in January since 1988, Hellstrom told USA Today in an email. However, Sweden has been warm since 1988 if annual temperatures are considered.

Additionally, Swedish data show a positive warming trend for January from 1985, he said.

“I don’t know why they started in 1988 in a blog post, but 1988 was a warm winter after several very cold winters in the mid-1980s,” Hellstrom said. “It’s an old trick to start with a warm year if you want to show the absence of a warming trend.”

The Irish data in the Japan Meteorological Agency portal probably originated at the Irish Meteorological Service, Met ireann, according to Sandra Spillane, a climatologist at the service.

Like Sweden, Ireland has not warmed since 1988 when only January is considered. However, annual temperatures have warmed significantly over that same time frame, Spillane told USA Today in an email.

While Sweden and Ireland do not show significant January warming since 1988, global January temperatures have warmed by about 0.3 degrees Fahrenheit per decade, according to the National Oceanic and Atmospheric Administration’s Global Time Series tool.

“You can almost always find shorter timescales or more local records” for what appears to be contradictory to the long-term global one, Gavin Schmidt, director of the NASA Goddard Institute for Space Studies, previously told USA TODAY. “Though they don’t.”

The blog post also claimed that Antarctic sea ice has been stable for 40 years. It is quite accurate.

While the extent – ​​size – of Antarctic sea ice has fluctuated since the late 1970s, it has not changed much overall.

“There was a trend toward increasing sea ice coverage in the Antarctic from the late 1970s to 2014, but with a decrease from 2014 to 2017, the record since the late 1970s does not show a strong overall trend, Claire Parkinson, a senior NASA climatologist, previously told USA TODAY.

This fact has been reported by several climate data agencies, including NASA, NOAA, the Intergovernmental Panel on Climate Change and the National Snow and Ice Data Center.

However, according to NASA, the Antarctic ice sheet has lost significant mass over the past few decades. The ice sheet rests mainly on the Antarctic landmass, while sea ice refers to the ice that forms over the ocean.

Based on our research, we evaluate the claim that Ireland and Sweden have not had a January summer since 1988, as this may be misleading without additional context. While the claim itself is accurate, it is based on cherry-picked data. If all months are considered, warming has been occurring in both Ireland and Sweden since 1988.

Thank you for supporting our journalism. You can subscribe to our print edition, ad-free app or electronic newspaper facsimile here.

Our fact-check work is partially supported by a grant from Facebook.