Nation World News- Tyrannosaurus Rex Is a carnivorous dinosaur famous for having an unusually strong bite, so that it is capable of paralyzing and destroying the bones of its prey. The evolution of the T-rex, in particular its eyes, turns out to be the mystery behind its bite power.

In order to have such a powerful bite, the T-Rex clearly had to make an evolutionary trade-off, which is to settle for just having small eyes.

Based on an analysis of 410 fossil reptile specimens from the Mesozoic period (252 to 66 million years ago), the researchers concluded that the T-rex and other similar meat-eaters evolved with smaller eyes over time.

These small eyes can compensate for the bites of T-rex and other similar carnivores, so that they are stronger.

Notably, carnivores with skulls greater than 1 meter have eye sockets that grow like keyholes as adults. Whereas vegetarians of all ages have circular eye sockets.

“It makes sense. As predators get older, they turn into larger prey that require more bite force to deal with,” said Stig, senior curator of vertebrate paleontology at the National Museum of Scotland Walsh, who was not involved in the study.

Meanwhile, quoted from live scienceThis new study on the evolution of the T-rex eye supports the idea that the brain and sensory organs such as the eye must adapt to accommodate the animal’s feeding strategy.

In this case, the feeding strategy is centered around this bone-crushing T-rex bite.

To analyze this, study author Stephen Lautenschlager, a vertebrate paleontologist at the University of Birmingham in the UK, scoured the literature. This was done to find details of the skulls of dinosaurs and reptiles dating back to the Mesozoic.

From there, they selected hundreds of skulls with well-preserved eye sockets as well as many incomplete skulls whose eye sockets could be reconstructed.

After comparing all the skulls, Lautenschlager noticed a few patterns. Most organisms, especially herbivores, have circular eye sockets.

Whereas the large-headed carnivore has an oval-shaped cavity and a keyhole. The same thing happened with the T-Rex.

To understand how this evolution of the T-rex’s eye socket shape may have influenced the carnivorous dinosaur’s ability to chew bone, Lautenschlager created three computer models. 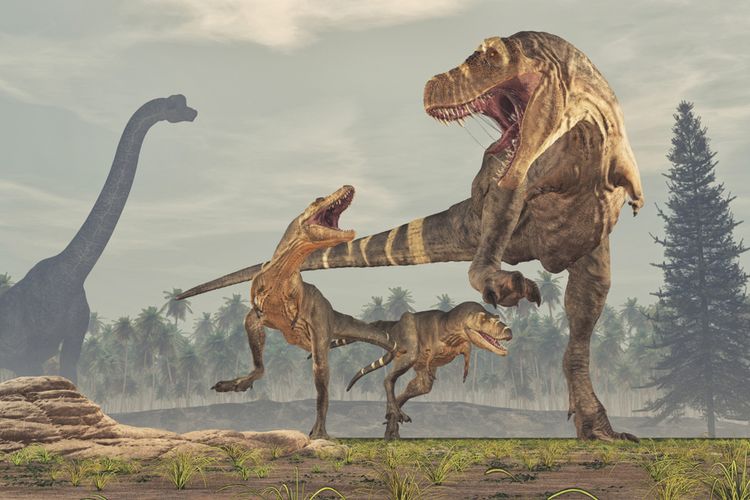 These models later revealed that during simulated bites, keyhole-shaped eye sockets were much less deformed than circular ones because they directed the force of the bite to the strong bone behind the eye socket.

“The shape of the keyhole reduces pressure in the skull during bite and twist, much better than the spherical shape. This is clearly an adaptation found in many large carnivores in different groups. Something that evolved independently. happened,” Lautenschlager said.

Meanwhile, if the T-Rex had never developed the long eye shape, its eyes would have weighed about 20 kilograms and measured 30 centimeters.

Such large eyes would be metabolically very harmful to T. rex and inconsistent with what we know about dinosaur brains.

The retina is the result of a brain region called the diencephalon, and T. rex, is that their brain size did not increase with their body size.

Furthermore, although they provide strong clues about the overall shape of the eye, skull fossils cannot reveal details of the eye’s anatomy or associated soft tissues such as nerves and muscles.

“This is where we hit a dead end in paleontology because we can know very little about the true shape of the eyeball based on fossil bones,” Lautenschlager said.

So in a follow-up study, the researchers will expand the eye-size analysis to include birds, the only living descendants of dinosaurs, as well as mammals with strong bites.

Studies on the evolution of the T-rex eye and the powerful bite of this carnivorous dinosaur have been published in the journal Science. Communication Biology.