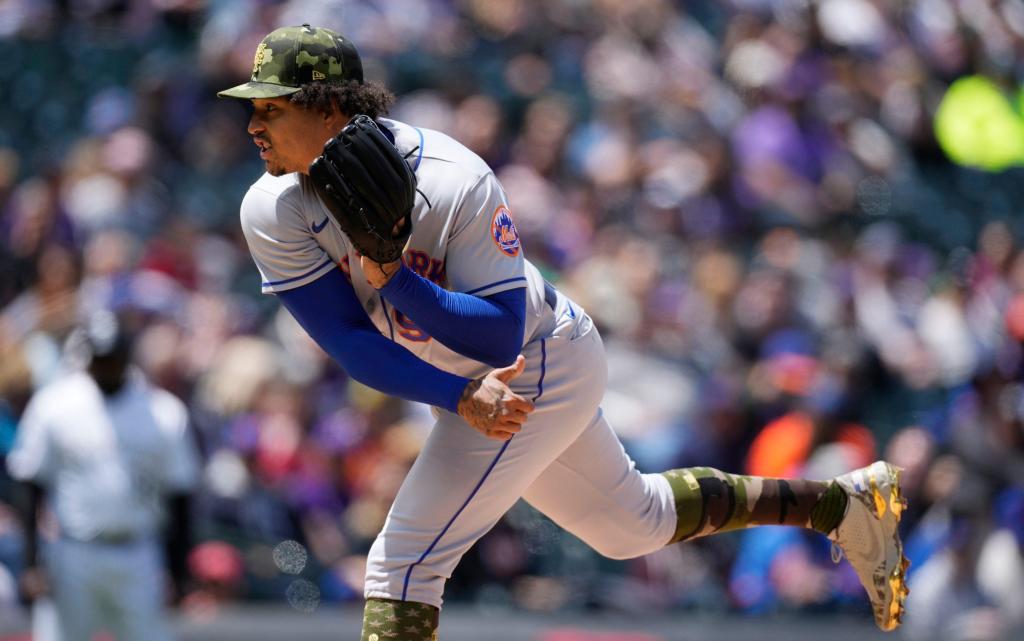 DENVER – Taijuan Walker took on the daunting task of pitching at Coors Field in his fifth career debut at the third-oldest ballpark in the National League.

Walker lowered his season ERA to 2.70 in the Mets’ 2-0 win over the Rockies on Sunday and secured his second win of the season. He bowled seven shutout innings and restricted Colorado’s batsmen to five hits and two walks. Walker posted a season high in strikeouts (six) and pitches (97) in his sixth and best outing ever. It was only the second shutout from a Mets pitcher at Coors Field.

“I just know what pitches work here,” Walker said, adding that he doesn’t like pitching at Coors, even though he has enjoyed success at the high-altitude ballpark. “It’s the curveball and the splitter that are two good pitches here.”

The Mets (28-15) improved to 11 series wins after starting a six-game road trip taking two of three against the Rockies. The Mets have an 11-1-1 record in their 13 series so far this season, and are 14-1 after the loss. He packed his lockers and enjoyed a pleasant flight after the win, traveling to San Francisco to play a three-game set against the Giants starting Monday.

In addition to his dominance on the mound, in which 12 consecutive batsmen retired at one point, Walker received a major assist from his defense in the seventh inning. With the Mets two runs ahead, Walker allowed a pair of no-out singles in his third time through the Rockies order. But they had their backs on the field, as Francisco Lindor and Jeff McNeil played a great 6-4-3 game, with at least the first two outs on the board.

But the danger still loomed, with the Colorado runner at third base. Luis Guillorme vacated a line drive off the bat from catcher Brian Cervan and turned in a lucrative play at third base for the final of the seventh. Walker was fired after the game of Guillaume, who had laid goose eggs on the board for the Rockies.

“It’s hard to turn these people off, period, but especially in this ballpark,” manager Buck Showalter said. “It was quite remarkable.”

The Mets accumulated both their runs in the sixth innings by taking advantage of the Rockies’ miscue. Brandon Nimmo’s movement converted a single into base three when Randall Grichuk made a fielding error in the right field. Francisco Lindor tied Nimmo to shortstop’s 24th RBI of the year to break the scoreless game and give the Mets a 1–0 lead. The Amazons never looked back, tackling another run to move Lindor to third place after Jeff McNeil doubled from left. Pete Alonso carried Lindor to an RBI groundout, and those two runs were the only edge the Mets would need to beat the Rockies.

“That was huge,” Lindor said of Nimmo’s bustle. “We won the game there.”

Meanwhile, Jolie Rodriguez chose a picturesque seat at home to watch the first four innings of the game. The Mets reliever took a lawn chair, a Red Bull, water, sunflower seeds, and a massage gun and sat directly into the rock pile in the batsman’s eye at center field. Wearing a hoodie and surrounded by vegetation and greenery, Rodriguez sat in the direct sunlight after having a chilly weekend in the Mile High City. Eventually, he was kicked out of his quiet by Coors Field security guards, so he briefly packed his belongings during the fourth inning and retreated from the bullpen at Coors Field.

Rodriguez entered the game in a two-run game with two outs in the eighth inning and a runner on the second. In his shortest respite of the year, Rodriguez struck a line out to Ryan McMahon on his first and only pitch of the day to end the frame. Perhaps the calmness and calmness in that batsman’s eye cove helped Rodriguez, after all.

“I went to the bullpen, I took a chair and I put it there because I wanted to watch a game from center field,” Rodriguez said. “I didn’t think it would be such a big deal that I was sitting there. I just went there to relax and it was a nice view.”

Ovechkin injured as Capitals lost to Maple Leafs in shootout