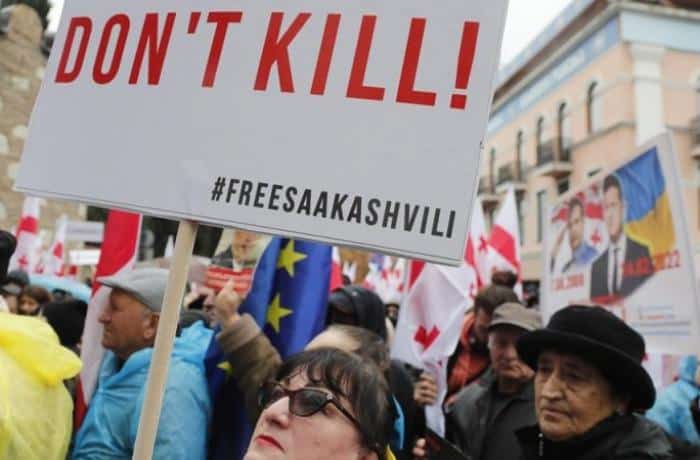 performance in and out of the country. However, the current head of state, Zurabishvili, is stalling. If Saakashvili does not regain his independence, then the chances of entering the European Union disappear, and precisely the purpose of the Georgian Dream Ruler is to “feed the nationalist consensus that wants Georgia out of everything.”

MOSCOW (AsiaNews) – In recent days, demonstrations of solidarity with former Georgian President Mikheil Saakashvili have multiplied in more than 40 cities around the world, under the motto #FreeMisha. Participants demanded that he be released and receive proper treatment abroad, especially after reports circulated that he had been poisoned in prison. The lawsuits have demanded Georgian President Salome Zurabishvili grant clemency to her predecessor.

At a briefing, Zurabishvili remarked: “My answer will come when it should come”, disappointing expectations but not closing the door entirely on the possibility of an act of leniency. Many wonder how to get out of this crisis,

Political scientist Kakha Gogolasvili, director of the Rondeli Fund’s European Research Center in Tbilisi, recalled in an interview that the president has reiterated on several occasions that “he will never pardon the third president of Georgia.” However, during his travels in Europe, several leaders from different countries asked him to reconsider his position. Zurabishvili tried to trick him by saying that he did not have the necessary powers and that he would have to complete the legal proceedings in court first. At the same time, “she is well aware that if Saakashvili dies, all responsibility will fall upon her, even more so than her Georgian Dream Party,” currently in power.

Saakashvili recently wrote a letter of thanks to the American financier William Brower, who openly supported him, asking him not to wait until his death to help the Georgians compile their “Magnitsky List”. Brower is known for naming Russian lawyer Sergei Magnitsky – who died in prison in Moscow in 2009 after exposing corruption by Putin’s bureaucrats – for initiatives to support victims of power around the world.

Georgia has long been divided into two irreconcilable fronts and the figure of the former president is a symbolic cause of the dispute, while Zurabishvili tries to claim the role of mediator between the parties. Gogolasvili believes that “in the end the president will decide for pardon, but with great care and slowly, waiting for the right time and trying to get the maximum consent of the population.”

The real issue remains relations with Europe, which “are vital for the survival of Georgia and not just for the imprisoned president,” Gogolasvili explains. If the president grants Saakashvili a pardon and manages to get him out of the country and restore him to health, “the European Union will certainly turn a blind eye to inadequate responses to the 12 conditions it sets for becoming a candidate. ” On the contrary, even if all the demands were met, the Saakashvili issue would still remain an insurmountable obstacle to achieving the desired result.

The EU Parliament had long ago called for the release of the former Georgian president, which was supported by a majority of lawmakers. In fact, while there were demonstrations in favor of Saakashvili, there were also crowds of people protesting clemency in front of the presidential palace in Tbilisi, and as political scientists confirm “they are really the exponents of that political and social sphere”. Who does not want for Georgia to join the European Union.

One of these anti-European people appears to be the capital’s mayor, former football player Kakha Kaladze, “who doesn’t care whether we enter Europe or not, because he is fine where he is, he would be in any European country”. He has no dearth of fame or wealth”. Politicians of the Georgian Dream, Gogolashvili explains, prefer to show themselves “above these issues” in order to feed the nationalist consensus that wants to exclude Georgia from everything.

However, experts invite us to “think about the next generations, our children and grandchildren”. The present has gone through many difficulties, but must ensure that the country “is not subjected to constant threats against its independence and integrity”, otherwise the Republic of Georgia will disappear in a vortex of invasion and internecine wars between the East and the East. . west.