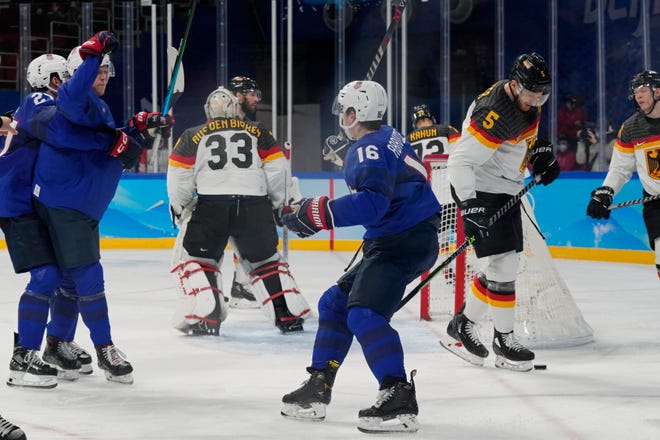 BEIJING — A quick straw poll of the US men’s hockey team after its 3-2 victory over Germany on Sunday revealed that most members are pulling for the Cincinnati Bengals in what is technically “Super Bowl Monday Morning” in China.

Head coach David Quinn said it’s always fun to root for the underdog. Plus, the Bengals remind him of the team he’s currently coaching.

“We’ll embrace the underdog role ourselves,” Quinn said. His team had just won Group A and earned an automatic berth to Wednesday’s quarterfinals at the 2022 Winter Olympics.

Underdogs? Sure. Nobody necessarily knew what to expect when this team of mostly college players and a handful of veterans who play professionally overseas came together last month after the NHL pulled out the Beijing Games.

FOLLOW THE CHASE FOR GOLD:Sign up for the Olympic newsletter and never miss a moment

WHO LEADS THE MEDAL COUNT? How each country performed at the Winter Games

But as the only team (of 12) to win all three games of group play in regulation, leading the tournament in goal differential at +11, make no mistake.

This team’s got swagger.

For the second straight day, the US found itself in an early hole. For the second straight day, it immediately answered the bell. The Americans went down 1-0 against Canada on Saturday and scored 70 seconds later. Then they surrendered a power-play goal two minutes into the matchup against Germany, the defending silver medalists, and equalized on their own power play 2 minutes and 26 seconds later on Steven Kampfer’s blast from the left point.

“It’s huge,” said Nathan Smith, whose backhanded goal early in the third period gave the US a 3-1 lead. “Usually when you get a goal scored on you early, you got guys that can let down a little bit. But we didn’t do that.”

Putting together a full 60-minute game will be necessary now that the stakes are higher. The standings won’t matter next time they take the ice, against the winner of Slovakia-Germany on Tuesday.

“We’re relentless,” captain Andy Miele said. “And we know we’re going to have to be in a tournament like this.”

All three opponents have tried to beat the smaller Americans with a more physical style, and it was no different with Germany, which brought an intensity and tried to intimidate the US

“Teams are going to try to run us out of the rink,” Miele, who will be catching up on sleep instead of watching the Super Bowl, said. “So far we’ve proven that that’s not going to happen.”

Despite beating Canada 4-2, Quinn went so far as to call his team “soft.” He felt it didn’t compete for 50-50 pucks, but skated by (literally) thanks to speed and quickness.

On Sunday against Germany it was a different story.

“We had an edge to us,” Quinn said. “I thought we were hard on pucks. We’re not a big team, so teams are probably going to try to overmatch us with physicality. I thought we answered the bell tonight.”

A tenacious forecheck has been the calling card through three games, and in the second period, second-line forwards Matty Beniers, Nick Abruzzese and Matt Knies kept the pressure on Germany and held the puck in the offensive zone. Flying around, Abruzzese fed Knies on a falling, wraparound pass in front of the net. Knies tapped the puck in to give the US a 2-1 lead.

“It was a pretty surreal play,” said Knies.

Germany challenged the play for goaltender interference, but the goal stood. Smith provided third-period breathing room, before Germany’s Tom Kuhnhackl made it a one-goal game with 2:29 to play. In the final 30 seconds, goaltender Drew Commesso (24 saves) had to step up.

“When you’re the goalie, you’re kind of the quarterback of your team,” Commesso said. “Plays like that, when it’s kind of hectic, things are happening fast, I just try to stay as calm as possible and talk to my (defense) and let them know what I’m seeing.”

And it was his defense that threw itself in front of pucks all night, which signaled to the 19-year-old netminder how close this team is off the ice.

“We can really start to tell our team is gelling now,” Commesso said. “Everyone’s really playing for each other and that shows with so many blocked shots, so many selfless plays by our (defense) and forwards. I know that everyone in that locker room is playing for that guy next to him and that’s only going to grow going forward.”

In a span of less than three weeks, they have become a team, Quinn said.

“It’s a really good mix and it’s a great group to be around.”

And now these “swaggy underdogs” have put themselves in a position to be around each other a little while longer.