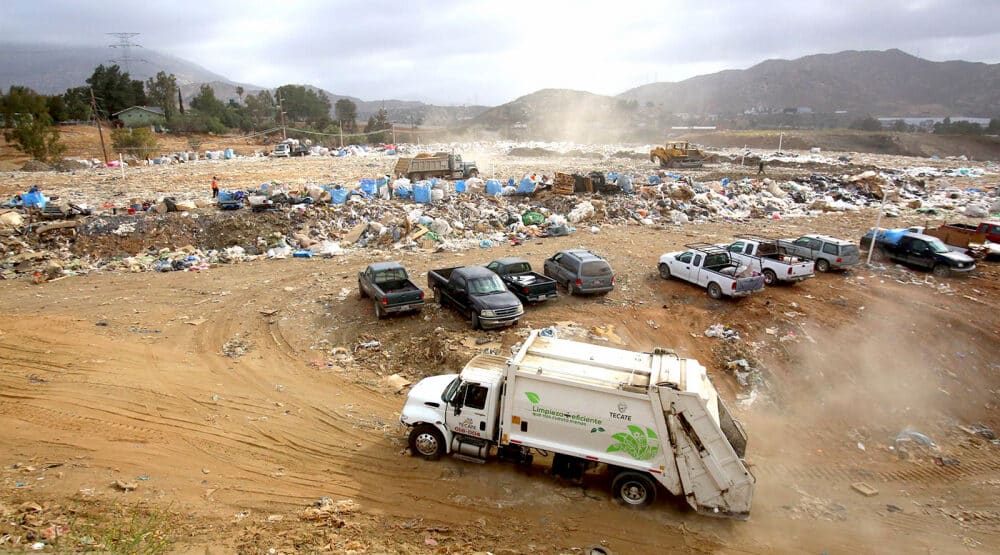 The Tecate Municipal Landfill has outlived its lifespan, yet tons of waste are dumped there daily. The waste already exceeds the perimeter fence of the Police Academy, Courts and the Municipal Pantheon, generating an intolerable odor for the resident families of the Paso del Aguila neighborhood, who also suffer from gastrointestinal infections arising from it.

The lack of a plan to address waste discharge from Tecate’s urban area, which also accepts waste from municipalities such as Tijuana and Rosarito, has caused much discontent among those who live and work in the area; Experts have pointed out that the overflow of garbage is also on the verge of becoming a public health problem for the families living near it.

On January 11, 2022, via live video, Municipal President Dario Benitez informed the Tecton community about the closure of a secret dump in the coffee section of Nueva Colonia Hindu, a rural area of ​​the municipality; From where the mayor pointed out: “At this time we are clueless as to what the new Teket sanitary landfill is, what it claims to be, or what it claims to be, the sanitary landfill that we have been denoting for many years as the ‘underworld’, the mafia of waste, without any ecological feasibility”.

Benitez then expressed that “this attempt to fill“did not meet the requirements set forth in the official Mexican standard NOM-083-SEMARNAT-2003, which includes environmental protection specifications for site selection, design, construction, operation, monitoring, closure, and supplementary works of the disposal site Urban solid waste and special management, which will make it “Transition Focus”“y”no ecological viability“, because of which”an ecocide, an environmental problem for residents”, as it is “a constant site of burning,

Nearly a year after the report, the secret dump continues to operate.

One of the problems, “the most serious”, as Benitez said at the time, was the lifespan of the municipal sanitary landfill in Paso del Aguila. On 11 January he said: “We know very well that the current sanitary landfill has 180 days left to live, but this gangland, this garbage mafia, it does not say, not to mention the people who fill it with the garbage of Tijuana, every day we see how Trucks and trucks of garbage and that they are charged to unload it in a landfill designed for waste from Tecate, not Tijuana.

To date, 80 tons are received per day at the Tecate Transfer Center, after being picked, about 50 tons are transferred to a municipal landfill.

According to the then municipal director of environmental protection, Alicia Ravello, there was and is not a solution from the municipality.

The sanitary landfill concession is operated by the same company that wants to set up the new sanitary landfill in Nueva Colonia Indus, a company called Administration, Development, Management and Operation, SA de CV.

The police academy is a few meters from the municipal landfill, where he made the remarks. Zeta They feel the smell emanating from the landfill daily and it gets worse when there is a fire. On the one hand, during the government of Jaime Bonilla, the “Lieutenant Alberto Bonilla Colmenares” militarized high school was built, from where you can see the mountains of garbage that already exceed the perimeter fence; There are also courthouses and the recently built Justice Building, which houses state government employees, including the Tecate Regional Prosecutor’s Office. What is the construction of the new state DIF cremation ground adjacent to the property.

All this is in front of the El Bajio Industrial Park, which houses more than 5 thousand workers; the Paso del Aguila neighborhood, in which more than 100 families live; “Ignacio Altamirano” Elementary School, CECYTE BC Campus Ticate; Municipal Pantheon No. 2 and Casa Hogar “Rancho Nazare”, less than a kilometer around the landfill.

At the time, Dario Benitez commented that the city council had all the necessary elements to nullify this “Leonean” concession that former mayor Joaquín Sandoval Millán had granted to the landfill’s representatives: “The concession does not allow the construction of another landfill, we cannot rent trucks, which is a faster way because the concession does not allow it, if we rent trucks, when we try to unload So they don’t let us, it’s a concession that doesn’t suck, or doesn’t hold, or doesn’t let him kill, so we have to put him up now”.

Under the concessionaire’s agreement with the Tecate City Council, the construction of a power generation plant, 15 garbage trucks of various models and the distribution of 90 uniforms every six months to the Municipal Clean Corps are scheduled. From 2007 to date, none of this has been done.

Attempts have been made by the municipal and state environmental protection directorate to review the conditions under which they operate inside the sanitary landfill, but so far they have refused to allow entry. In this regard, Alicia Ravello pointed out:

“They haven’t allowed us to enter, I’ve gone to quit, so far they’ve denied me entry, I’ve traveled the perimeter and I can see they’re practically invading a farm.” There is evidence of fire in both. burning of cells, geomembranes and pipes, in fact not complying with the sanitary landfill standard”.

For his part, on January 12 on the radio program “Commentando la Noticia”, Benitez expressed:

Despite indications made by experts, municipal directors, residents of the area and the mayor himself, the sanitary landfill continues to operate, given the possibility that, in terms of presenting a concrete project, Javier Fimbres has taken on the role of mediator. , the new sanitary landfill they intend to set up in the rural area is given to a “garbage gang”.

The matter has reached the state administration. Monica Juliana Vega Aguirre, Secretary of Environment and Sustainable Development in Baja California, determined that following a review conducted at the Tecate dump, a “historic” fine would be applied to the concessionaire for the environmental damage caused.

“We have been very attentive to the fact that they have been published, and as a result of these and the citizen complaints, an inspection has been conducted by the Baja California Secretary of the Environment as permitted by law, the resolution is to impose historic penalties on the business. Willing to inform the dealer about the penalty; the property is owned by the city council, we cannot proceed to close because we will create a public health problem in Tecate. The mayor has on several occasions called for a new project We have talked about what they have in terms of sanitary landfill and we are waiting for them to come closer, because what is up to the state government is whether to authorize the new sanitary landfill or not. The law is in force”, the official he said. He later warned:

At that time, Governor Marina del Pilar Ávila Olmeda asked the Secretary of the Environment to communicate with Dario Benitez to review the issue of the secret garbage dump.

“Waste affecting the population cannot be left on the street, but neither can we have dumpsters that do not comply with environmental regulations and affect the air quality and the environment of Tekatan families.”

On Monday, December 19, via social networks, the mayor of Tecate confirmed the meeting, assuring that both sides already had a solution, the state government for the acquisition of the trash cans and the future closure of the landfill. highlighted the support of ,

Meanwhile, tons and tons of garbage continue to arrive at the already lifeless Tecate landfill.